It will be a clash of the heavyweights when Chelsea welcome Manchester City to Stamford Bridge in the marquee Premier League fixture of the weekend.

Gameweek 17 of the 2020/21 Premier League season continues on Sunday, with just two matches on show. The proceedings for the day will be culminated in the capital London, as Chelsea play hosts to Manchester City at Stamford Bridge, with both sides desperate to grab all three points.

Chelsea endured a difficult end to 2020, having managed to win just one of their last six games in all competitions. In the Premier League, losses in key fixtures against Everton, Wolves and Arsenal, in addition to the 1-1 stalemate last time out against Aston Villa, has sent the Blues tumbling down the table, with Frank Lampard’s men currently 6th on the table, 7 points adrift of leaders Liverpool.

Manchester City, on the other hand, are coming on the back-end week that has been mired in uncertainty, having seen their Monday night game against Everton being called off. To make matters worse, Pep Guardiola is missing a number of key players due to COVID-19 infection, but his team’s recent form – unbeaten in 10 across competitions – will fill him in with confidence.

The corresponding fixture last season saw Chelsea eke out a narrow 2-1 win over Manchester City in a result that officially ended City’s defence of their Premier League crown. Ahead of the latest meeting between the two sides, The Hard Tackle takes a closer look at the encounter.

Reece James misses out for Chelsea against Manchester City. (Photo by Glyn Kirk/AFP via Getty Images)

Frank Lampard has already been under the pump due to the recent downturn in form his side has gone through. Ahead of the visit of Manchester City, the Chelsea manager has suffered a fresh blow, this time on the team news front, with one first-team player set to miss out on Sunday.

Reece James is the said absentee for Chelsea, as he recovers from a minor hamstring injury. In some good news, though, Hakim Ziyech will be in contention to feature, having taken part in full training this week. Lampard, though, refused to comment on whether the Moroccan is ready to start when Manchester City arrive at Stamford Bridge.

Ziyech is unlikely to be risked, considering the nature of his injury, meaning Christian Pulisic should be stationed on the right side of the Chelsea attack. On the left flank, Timo Werner, who has been under increasing pressure lately, is likely to come in for Callum Hudson-Odoi, while Olivier Giroud will lead the line against Manchester City.

Finally, at the back, Cesar Azpilicueta is a certainty owing to James’s injury. The Chelsea captain will join Thiago Silva, Kurt Zouma and Ben Chilwell at the back, with Silva and Zouma returning to pair up at the heart of the Chelsea defence. In goal, Edouard Mendy ought to keep his place, despite another frustrating outing last time out.

The big talking point for Manchester City ahead of the trip to Stamford Bridge is the identity of the three first-team players who, like Kyle Walker and Gabriel Jesus, are in self-isolation after contracting COVID-19, with Pep Guardiola refusing to reveal their names during his pre-match press conference.

Having said that, it appears as if one of the aforementioned trio is first-choice goalkeeper Ederson Moraes, who made a social post about being in self-isolation. If that is indeed the case, then Zack Steffen should be stationed in goal against Chelsea. As for the other two players, with their names not revealed yet, the probable lineup will not be created on further speculation.

Walker’s absence means that unless he is also infected with the coronavirus, Joao Cancelo will start in the right-back berth. On the opposite flank, Benjamin Mendy should be a certainty, with Ruben Dias and John Stones pairing up at the heart of the Manchester City defence.

Up ahead in midfield, Ilkay Gundogan could be preserved after having sustained a minor foot injury last time out against Newcastle United. In his stead, Fernandinho and Rodri should form the double pivot, with the duo looking to keep a check on the output of Chelsea’s creative supremo Mason Mount.

Finally, in attack, the key man for Manchester City will invariably be former Chelsea midfielder Kevin De Bruyne, who will likely be flanked by Riyad Mahrez and Raheem Sterling, while Sergio Aguero will be the central striker for the visitors in the absence of Jesus. 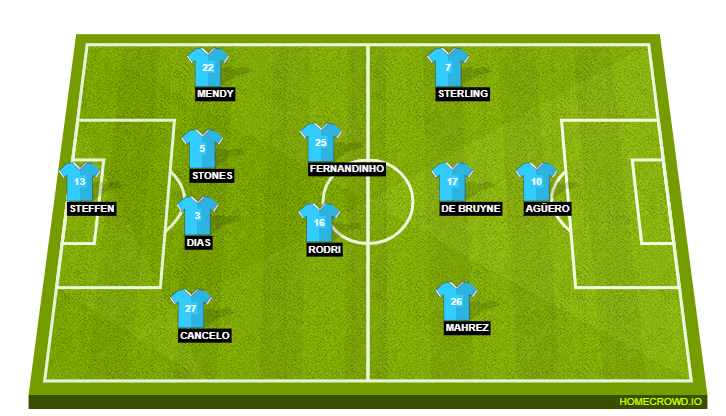 Chelsea fans were understandably filled with optimism following their spending spree in the summer transfer window. One of their big signings, Timo Werner, was touted to be a long-term solution in attack; a goal machine who would take care of the duties in the opposition box for years to come.

So far this season, though, Werner has struggled to stamp his authority in the Chelsea attack, with a shuffle in positions hardly helping matters for him. As things stand, Werner is in no position to lead the line for Chelsea, and seems to now be battling for a place in the starting lineup.

Frank Lampard, who has not held back in his criticism of the German international, has praised the 24-year-old in the build-up to the game. So, as Manchester City get set to pay Chelsea a visit, it will be interesting to see if Werner derives any confidence from his manager’s words, as he looks to get back to top form.

In what is a game between two of the most star-studded squads in the Premier League, it is hardly surprising that as things stand, it really could go either way. Manchester City are the more in-form side heading into this weekend’s fixture, but have been ravaged by the coronavirus. Chelsea, on the other hand, are struggling to build a winning run.

So, all things considered, it looks like there might be very little to separate the two sides. Having said that, Frank Lampard could be welcoming Hakim Ziyech back on Sunday while Pep Guardiola could be stretched for options in the latter stages of the game. With that in mind, Chelsea might have the slightest of edges, which is why The Hard Tackle predicts a 2-1 win for Lampard & co.