Manchester City will look to continue their charge up the Premier League table when they take on Everton at Goodison Park on Monday.

The busy festive period continues and the games are coming at an express pace in the Premier League. Gameweek 16 of the 2020/21 Premier League season begins on Monday and Manchester City will close out the proceedings for the day when they lock horns with Everton at Goodison Park.

Everton have made quite an impression under the tutelage of Carlo Ancelotti and at the end of Gameweek 15, they finished second on the table. The Toffees currently sit just three points behind neighbours Liverpool and a run of four successive wins in the top-flight has defined their charge up the table, with the latest such result being the 1-0 defeat of Sheffield United this past weekend.

Manchester City, on the other hand, have been quite underwhelming in the opening third of the latest campaign, managing to win just half of their 14 outings till date. However, with two wins in each of their last two games, Pep Guardiola & co. have managed to climb up to 6th in the standings, with their latest success coming against Newcastle United.

The corresponding fixture last season ended in a 3-1 win for Manchester City courtesy goals from Gabriel Jesus, Riyad Mahrez and Raheem Sterling, with Dominic Calvert-Lewin scoring the only goal for Everton. Ahead of the latest meeting between the two sides, The Hard Tackle takes a closer look at the encounter.

Carlo Ancelotti does not have any fresh injury concerns hampering his preparations ahead of the visit of Manchester City. On Monday, the Everton manager will continue to bereft of the services of six first-team players.

The major absentees for the Toffees are Lucas Digne, Allan, James Rodriguez and Richarlison, while Fabian Delph and Jean-Philippe Gbamin remain on the sidelines as well. The absence of the aforementioned quartet means Everton might approach the game with a defensive outlook.

With Digne still unavailable, Ben Godfrey should reprise the left-back role, with Seamus Coleman likely to return to the starting lineup on the right flank. At the heart of the Everton defence, Michael Keane and Yerry Mina should pair up again, with Jordan Pickford taking his place in goal.

Up ahead in midfield, Tom Davies should sit in the double pivot alongside Abdoulaye Doucoure, with the two players sitting behind the ball to snuff out any danger that Kevin De Bruyne aims to create. Gylfi Sigurdsson will, meanwhile, reprise the no. 10 role, looking to pull the strings when the opportunities present themselves.

With the game coming too soon for Richarlison and James Rodriguez, Alex Iwobi and Bernard are near-certainties out on the flanks. Finally, there is no looking past Dominic Calvert-Lewin to lead the line for Everton against Manchester City. 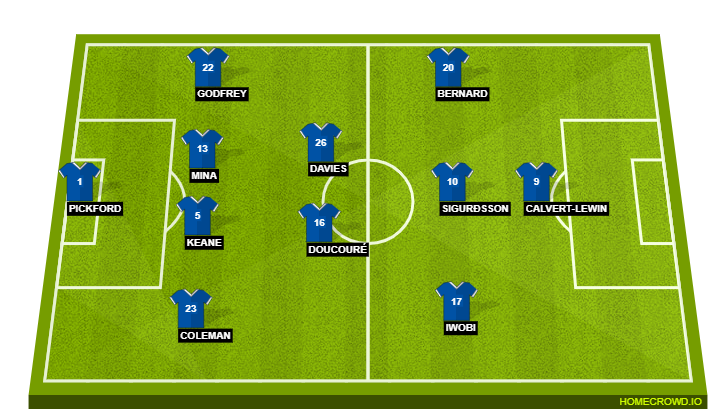 Much like his counterpart in the Everton dugout, Pep Guardiola is not bogged down by further roster issues than he already was on the weekend. On Monday, the Manchester City boss will have to make do without the services of as many as three first-team players.

Eric Garcia, whose future continues to be uncertain, still remains on the sidelines as he battles to regain match fitness. In addition, Kyle Walker and Gabriel Jesus miss out once again due to their ongoing recovery from the coronavirus.

In the absence of Jesus, Sergio Aguero could finally get the chance to return to the starting lineup, spearheading the Manchester City attack against Everton. Aguero’s return will mean that Raheem Sterling will be one of the two wide men, with Riyad Mahrez starting on the right flank. In the hole, Kevin De Bruyne is an automatic pick and will look to run the show for the visitors.

With De Bruyne playing as the advanced midfielder, Fernandinho and Ilkay Gundogan will sit in the double pivot to provide a stable base in the middle of the park. At the back, only one change is expected, with Benjamin Mendy coming in for Nathan Ake. Ruben Dias, John Stones and Joao Cancelo are certainties in defence, with Ederson manning the Manchester City goal. 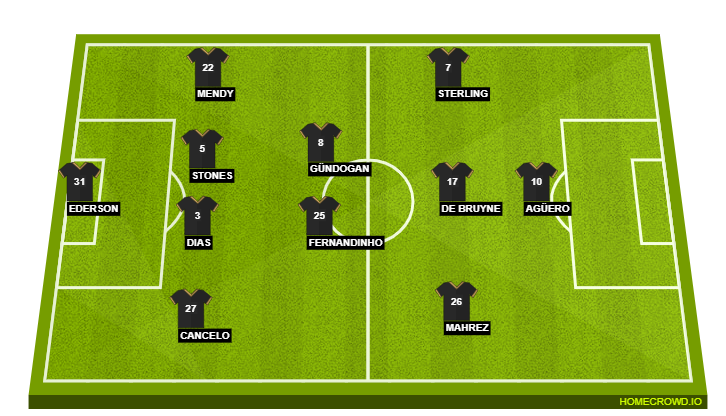 Unplayable on his day. (Photo by Lindsey Parnaby/AFP/Getty Images)

In a season wherein Manchester City have uncharacteristically struggled to find the back of the net as consistently as they usually do, the absence of Sergio Aguero has been dearly felt. The Argentine, reaching the end of the line at the club, has had to deal with fitness issues to no end this term.

However, with Gabriel Jesus missing out once again, Aguero might just get the chance to make his long-awaited return to the starting lineup. Having failed to score in his last 10 Premier League games, the Argentine needs to end his own woes in front of goal. Just the right kind of match for him to rediscover his best touch.

This does not seem to be the kind of game that will have a lot of goals in it. For Everton, the absence of Lucas Digne, Allan, James Rodriguez and Richarlison means Carlo Ancelotti will set his team up in a style different to his usual attack-oriented approach.

Manchester City, on the other hand, should dominate possession, but might not find things easy in the final third, although the return of Sergio Aguero in the starting lineup could be game-changing for the visitors. To that end, The Hard Tackle predicts a closely-contested affair that will end in a 1-0 win for Manchester City.