Manchester United begin their 2016-17 Premier League campaign under new boss Jose Mourinho with a tough test away to Eddie Howe’s Bournemouth on Sunday.

Bournemouth look to continue their progress after a strong first season in the Premier League, with Eddie Howe brushing aside speculation about his potential appointment as manager of the England national team. Manchester United, on the other hand, prepare themselves for the dawn of a new era under the ‘Special One’.

Sunday’s game at the Vitality Stadium will be a tricky one for Mourinho and his men as one of the brightest young English managers pits his wits against one of the most successful managers of this generation. Howe has been at Bournemouth for four years and most likely knows more about his squad than Mourinho does about his at this point in time, which could prove to be a deciding factor to tip the scales in his favour.

Bournemouth will be without Junior Stanislas — a scorer in the Cherries’ previous meeting against Man Utd — who is recovering from a hernia problem and is expected to return at the end of the month. Tyrone Mings is out with a knee injury and is likely to be available for selection in September. However, Eddie Howe has more options in defence with the loan arrival of Nathan Ake from Chelsea and the signing of Brad Smith from Liverpool.

Elsewhere, Emerson Hyndman is doubtful for the game with an ankle problem, while Baily Cargill is out for an indefinite period of time with a groin injury. There is some relief in the fact that both the new signings from Liverpool, Brad Smith and Jordan Ibe, are available for selection ahead of the season opener.

Eddie Howe’s tactics are usually very straightforward, with not many out-of-the-box moves. The focus of the team on the pitch is to cover ground and fill spaces to make it hard for the opposition to move the ball forward smoothly, while breaking quickly at every chance.

Eddie Howe must focus on the defensive side, though, as Bournemouth conceded more goals last season in the Premier League than every other team with the exception of Aston Villa. With the majority of the teams in the league this season upgrading their attacks, the Cherries must improve defensively if they are to have a shot at survival or a possible mid-table finish this term. 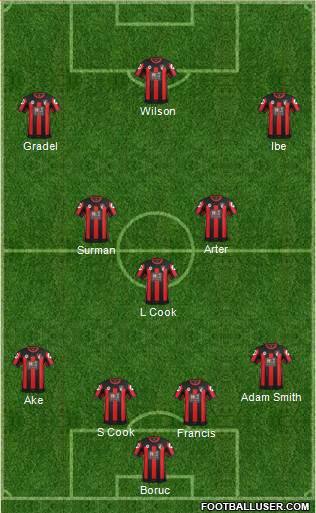 It is a toss-up between Gradel and Pugh for the second winger’s spot, with Gradel just edging it in terms of potential. There are a couple of other striking options in Joshua King and Benik Afobe, who could be brought on from the bench to have an impact if the need arises. New signing Brad Smith is likely to be on the bench for the match, with Ake getting the nod at left-back.

World record signing Paul Pogba is unavailable for the season opener due to a one-game suspension carried over from Italy. Chris Smalling is another player that will sit out the match due to suspension, which could force Mourinho to play Daley Blind alongside Eric Bailly at the heart of the Red Devils’ defence. Luke Shaw looks fit and fresh ahead of the season opener and is likely to start on the left hand side of the defence, with Antonio Valencia being preferred over Matteo Darmian due to the Ecuadorian’s pre-season form.

Michael Carrick is likely to start, but the Englishman needs cover in midfield if he is to really thrive for United — something which Marouane Fellaini failed to provide in pre-season. This might mean a start for Morgan Schneiderlin alongside the deputy captain as Mourinho looks for stability in the middle of the park.

Jesse Lingard would be hoping he has done enough in pre-season to earn a place in the starting lineup on the right wing, with Anthony Martial on the other side of the field. Zlatan Ibrahimovic is expected to spearhead the United attack, while Marcus Rashford could come on in the latter stages of the game.

Mourinho is faced with a dilemma in choosing his No.10, with Wayne Rooney, Henrikh Mkhitaryan and Juan Mata all in contention for that role. Rooney might just edge Mkhitaryan however, with the former Borussia Dortmund attacker likely to come on from the bench. Mata, meanwhile, could also be used if the Red Devils are looking for additional creativity in the final third.

Jose Mourinho has said that he wants to see professionalism from the squad along with some attacking intent. The Portuguese’s teams are famous for their quick counter-attacks — glimpses of which could be seen in pre-season — and the fans would be delighted at the return of rapid counter-attacking at Manchester United.

Mourinho wants attackers to track back as much as possible, which could help with the defence’s ability to deal with incoming attacks and lower the possibility of counter attacks that leave the defence exposed. There is not much of a difference in the Portuguese’s tactics to his predecessor and mentor Louis Van Gaal, with the focus now shifting from retaining possession to pushing forward at a faster pace. 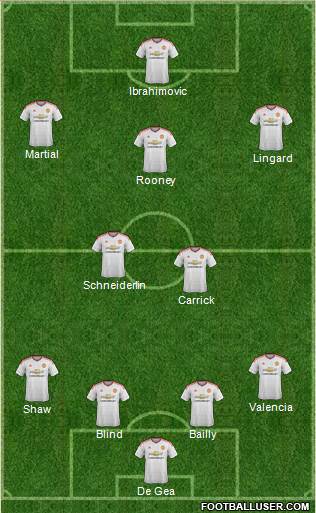 This will be a tricky fixture to start Jose Mourinho’s reign at United, with Eddie Howe’s team providing a stern test for the Red Devils. Harry Arter has the ability to find teammates at will from any range, which would come in handy in catching out any United players out of position.

Bournemouth are likely to score given the away side will be without Smalling, while Mourinho’s ideology is still in the process of being adapted by the players. However, United’s star power and Bournemouth’s troublesome defence mean that the Red Devils will likely win the first three points of the Mourinho era.