You are here: Home » news » Predicted Chelsea lineup against Liverpool: Werner to return; James in for Hudson-Odoi
Football News 24/7

Reece James and Timo Werner will return, but Callum Hudson-Odoi will drop to the bench when Chelsea take on Liverpool on Thursday.

Chelsea will be eager to continue their unbeaten start under Thomas Tuchel when they lock horns with Liverpool at Anfield on Thursday night. And, the German manager does not have any fresh injury concerns to contend with ahead of his side’s latest fixture.

Thiago Silva remains the only player unavailable for Chelsea, although the Brazilian defender has resumed training. In some more positive news, though, Callum Hudson-Odoi is fit after recovering from a minor thigh injury. Tuchel provided an update on Silva and Hudson-Odoi during his pre-match press conference.

“Thiago made his first training with the team but did not finish the last exercise, not because of any pain but just to be aware of taking a risk. I assume he will train today but he is not at 100 per cent so he will not join the squad for Liverpool. Everyone else is available. Callum has no issue at all. He was training full with the team yesterday.”

Silva’s continued absence means Andreas Christensen will retain his place in the three-man central defensive unit, with Antonio Rudiger and captain Cesar Azpilicueta starting alongside him at the back. In the Chelsea goal, there is no looking past Edouard Mendy.

The first shuffles will come higher up the pitch, with Marcos Alonso and Reece James expected to come into the side as the two wing-backs, meaning Ben Chilwell and Hudson-Odoi will make way. In the middle, N’Golo Kante and Mateo Kovacic should continue, with Jorginho missing out once again.

Finally, in attack, there is likely to be just one change, with Tammy Abraham, who has recently been linked with a possible move to West Ham United, likely to miss out again. Tuchel did speak about the English striker during his presser and how he hated leaving him out of Chelsea’s matchday squad against Manchester United last Sunday.

“It’s my job to push him to his limits. We will not stop doing this and supporting him. It was a tough decision, but we have to make these decisions. It’s a part of my job I do not like, but at the same I like it because it means everybody is available. He lacks a bit of luck Tammy, not only in games but also in training, and once the last touch comes back he will be a player we will push forward.” 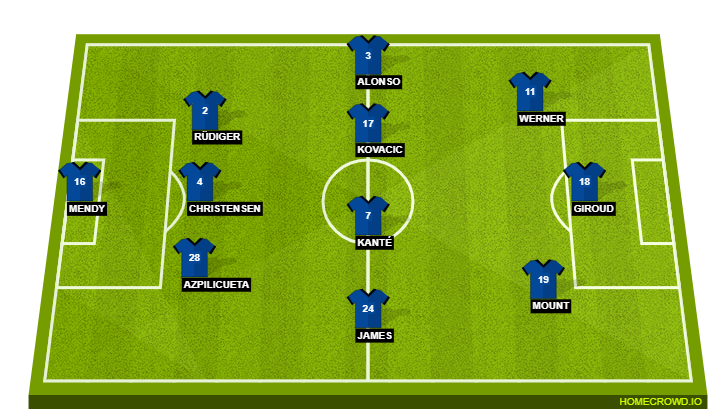 On Thursday, Olivier Giroud will continue to lead the line for Chelsea, with Timo Werner and Mason Mount completing the attacking trifecta against Liverpool. The likes of Hakim Ziyech, Christian Pulisic, Kai Havertz and Abraham could be backup options on the bench.