The marquee Premier League fixture this midweek will be played on Thursday at Anfield, where Liverpool will host Chelsea in a high-stakes encounter.

The action continues to come at a relentless pace all across Europe and in England, Premier League football is being played this midweek. The big game in this abridged midweek round of fixtures will be played at Anfield, where Liverpool will be playing hosts to Chelsea on Thursday night, with both teams in desperate need of a win.

Liverpool have suffered enormously since the turn of the year, having gone from the top of the table and title contenders to as low as sixth and mere top-four hopefuls as things stand. Heading into the latest match they are scheduled to play, the Reds will be relieved more than anything after ending a four-game losing run with a 2-0 win at Sheffield United on Sunday.

Chelsea, on the other hand, continue to make gradual progress under the tutelage of Thomas Tuchel. While the Blues are unbeaten after playing their first nine games with the German manager in-charge, shipping in just two goals, they have been quite goal-shy and have managed to find the back of the net just 10 times. Nevertheless, this has been a good base to build upon for the west Londoners.

The reverse fixture, played at Stamford Bridge back in September, saw Liverpool running out 2-0 winners over Chelsea, with Sadio Mane scoring a match-winning brace. Ahead of the latest meeting between the two sides, The Hard Tackle takes a closer look at the encounter,

Virgil van Dijk and Jordan Henderson are two of several Liverpool players who miss out against Chelsea. (Photo by Paul Ellis/AFP via Getty Images)

Jurgen Klopp has a bevy of pressing injury concerns hampering his preparations ahead of the visit of Chelsea. On Thursday, the Liverpool manager is set to be bereft of the services of as many as six first-team players, although he has greeted a bit of positive update as well.

This good news comes in the form of the return of Alisson Becker and Fabinho, both of whom are likely to be available to make the starting lineup against Chelsea. The likes of Virgil van Dijk, Joe Gomez, Joel Matip and Jordan Henderson are all done for the season, though, unfortunately, while Diogo Jota and Caoimhin Kelleher remain on the sidelines due to their respective injuries.

Fabinho’s return means Nat Phillips will make way at the heart of the Liverpool defence, where he will likely have Ozan Kabak for company. Trent Alexander-Arnold and Andrew Robertson ought to be the two full-backs once again, with the duo having the bulk of the creative responsibility on them. Meanwhile, Alisson should reclaim his place in goal from Adrian.

Up ahead in midfield, Henderson’s absence means Georginio Wijnaldum, whose Liverpool future remains uncertain, will continue at the base of the three-man unit, with Thiago Alcantara and the in-form Curtis Jones providing defensive support. Jones, though, will also push forward to connect with the three forwards, likely to be Mohamed Salah, Roberto Firmino and Sadio Mane. 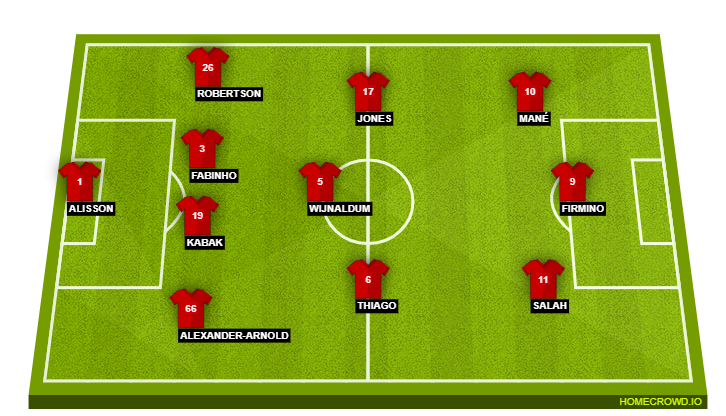 Unlike his counterpart in the Liverpool dugout, Thomas Tuchel hardly has any roster issues on his hands ahead of the trip to Anfield. In fact, on Thursday, the Chelsea boss could have a full-strength squad to boast, with Thiago Silva and Callum Hudson-Odoi back in training.

In fact, considering the importance of the fixture, Silva could be thrust back into the starting lineup straightaway, provided he is fit enough to start. The veteran centre-back will come in for Andreas Christensen, combining with Antonio Rudiger and Cesar Azpilicueta in the back-three, whereas Edouard Mendy is a certainty in goal.

In midfield, Hudson-Odoi might miss out despite recovering quickly from the injury he sustained, with Reece James expected to be the right wing-back. On the opposite flank, Marcos Alonso is likely to come in for Ben Chilwell. The duo will have the responsibility of providing width in the final third

In the middle, N’Golo Kante should feature again, with Mateo Kovacic starting alongside him. The two will look to keep a check on Curtis Jones apart from Roberto Firmino. Finally, in attack, Mason Mount is a certainty, with Olivier Giroud and Timo Werner completing the trifecta. 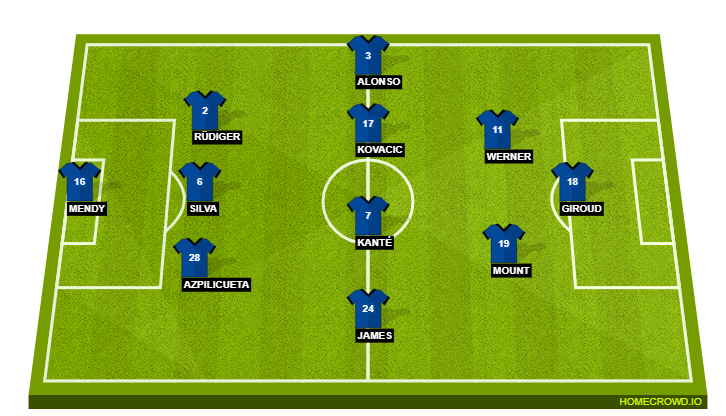 The likes of Mohamed Salah, Sadio Mane and Mason Mount will have a lot riding on them in the final third on Thursday. However, how Georginio Wijnaldum performs will go a long way in going on to determine the outcome. The Dutchman’s importance has increased in the past week or so after news of Jordan Henderson’s long-term absence emerged.

With the Liverpool captain missing against Chelsea as well, Wijnaldum will need to be at his very best if Liverpool are to rediscover some of their swagger, which can only be built upon a solid base in midfield. If not, Chelsea could seize the initiative in the game and probably the win as well.

The aura around Anfield and a Premier League home game for Liverpool has dissipated completely. No longer are the Reds a feared quantity for visiting sides at what was once a fortress. And, with Chelsea increasingly growing in confidence under the guidance of Thomas Tuchel, another difficult game beckons Jurgen Klopp & co.

Expect this one to be a closely-contested affair, with goalmouth action coming few and far between. While Liverpool should breach the Chelsea goal, their own frailties at the back will keep the Blues in the game till the dying embers. To that end, The Hard Tackle predicts the game to end all square, with Liverpool and Chelsea playing out a 1-1 draw.