Gareth Southgate has picked his final 23-man squad for the 2018 FIFA World Cup. But, can England shed their underperfoming tag in Russia?

At the 2014 FIFA World Cup in Brazil, England did have a tough group to contend with, with former champions Italy and Uruguay in it, but they ended up finishing last, with Costa Rica the surprise toppers. Fast forward to Euro 2016, England did make it out of the group stage, but were beaten by debutants Iceland in the Round of 16 – another forgettable campaign.

In the qualifiers though, there has been very little stopping England for quite some time now, and it was more of the same during the qualification stage for the 2018 FIFA World Cup. Gareth Southgate’s men coasted through without facing much of a problem.

As the manager looks to usher in a new era on a positive note, The Hard Tackle takes a look at the squad that he has picked and their realistic chances at Russia 2018.

England have been drawn in one of the trickier groups in Group G, with Tunisia, Belgium and Panama for company. The Three Lions will begin their World Cup campaign on June 18 against Tunisia, before facing Panama on the 24th. They will then wrap up their group stage assignment with a potential table topping game against Belgium four days later.

Gareth Southgate was one of the earliest to name his final 23-man squad for the World Cup, several weeks before the June 4 deadline set by FIFA. Here are all the players that made the cut in a list that did have some surprise exclusions and inclusions:

England are set to be lead into their new era by Harry Kane, who was handed the armband by Gareth Southgate ahead of Jordan Henderson. Meanwhile, as is usually the case with World Cup squads, there were a few surprise exclusions.

The biggest name that seemed to be missing when Southgate announced his squad was undoubtedly Jack Wilshere. The Arsenal midfielder had been a favourite for previous manager Roy Hodgson and had been given the backing to be a key player for England by his departing Arsenal manager, Arsene Wenger.

That Wilshere failed to make it to even the standby list, where Lewis Cook, Adam Lallana and a relegated Jake Livermore were picked ahead of him, only ended up rubbing salt into his proverbial wound. James Tarkowski is another player who could count himself unlucky for missing the trip to Russia after a stellar campaign with Burnley.

Meanwhile, Southgate shocked almost everyone when he named Ruben Loftus-Cheek in his squad, even though the 22-year-old had enjoyed a strong season with Crystal Palace, on-loan from Chelsea. But, the fact that the player trumped Jojo Shelvey – a popular call to make the cut – was more surprising than his selection itself.

Southgate’s reasoning was that he is focusing on giving the players he believe in some exposure as he looks to develop and integrate them in his squad. The same policy also saw Trent Alexander-Arnold make the squad for the World Cup, although not many would argue with his selection after a fantastic season with Liverpool.

The key player for England though, will undoubtedly be Kane, who will need to continue his club scoring form for his National Side to stand any chance of succeeding in the tournament. Alongside him, the likes of Marcus Rashford, Dele Alli and Raheem Sterling will bring a youthful verve to the side.

England started their World Cup qualifying campaign under the tutelage of Sam Allardyce, who succeeded Roy Hodgson to the national job. They began well under him as well, winning their beating Slovakia in their first game, but the veteran manager soon had to part ways with the National Side after getting mired in allegations of malpractice.

With Allardyce vacating the spot after just 67 days and one game, the FA had to scramble to find a manager, at least for the rest of the qualification campaign. And, they did so by promoting Gareth Southgate from the under-21 side to the senior setup.

While the Three Lions haven’t exactly set the stage on fire under his tutelage, the young manager has brought stability and a youthful flavour to the National Side, while also overseeing an unbeaten qualifying campaign.

Eyes on the prize. (Photo by Alex Livesey/Getty Images)

During this phase, Southgate has experimented with a number of playing styles and systems, but ahead of the World Cup, he looks to have zeroed in on the 3-5-2 formation, with the focus on shoring the defensive side of things while looking to attack at pace.

Jordan Pickford seems to have done enough to be the first-choice goalkeeper at the World Cup ahead of Jack Butland and Nick Pope, but the back-three poses a lot of question marks. While Kyle Walker looks to have surprisingly nailed a place in the three-man central defensive pairing due to his pace, the choice of his partners is uncertain.

Southgate may be focusing on creating a young squad, but Gary Cahill is likely to be the leader at the back for England, with one of Phil Jones and John Stones completing the backline. In midfield, Eric Dier will sit deep as the anchorman in front of the back-four, giving the attackers in front of him the freedom.

The wing-backs are likely to be Kieran Trippier and Ashley Young. Meanwhile, the front quartet is the most settled unit, with Harry Kane, Jesse Lingard, Dele Alli and Raheem Sterling likely to start, with Kane and Sterling being the most advanced forward. Lingard and Alli will be given a free role and will look to create overloads in and around the opposition box 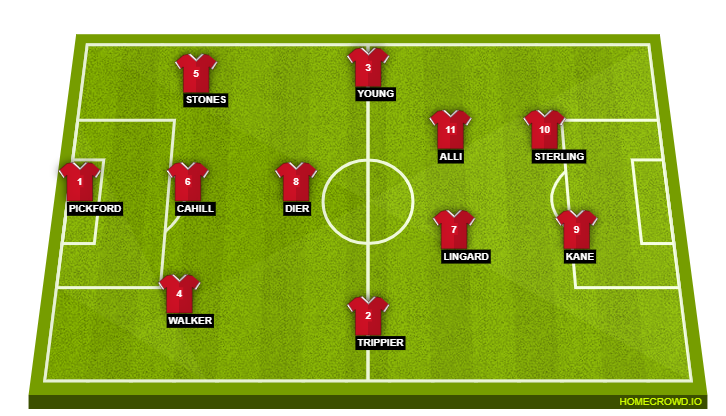 Recent international competitions have seen a template England side and setup take the field. But, there is something refreshingly different about Gareth Southgate & co. even though the results might not have been the proof of the pudding. A new-look, youthful side that does not fear even the biggest sides in the world.

The same is evident from the fact that they haven’t conceded from open play in 627 minutes of football against the likes of Brazil, Germany, Italy and the Netherlands. Tunisia and Panama could potentially prove to be hard to break down, but the Three Lions should have enough to come through their group.

A tough match may await in the Round of 16, but we predict this fearless side to make it through to at least the quarter-finals, with Harry Kane leading from the front, and the likes of Raheem Sterling and Dele Alli enjoying fine campaigns as well.