Nabil Maaloul has picked a preliminary 29-man squad for FIFA World Cup 2018. But, can Tunisia make a successful comeback to the big stage?

A side that has had its fair share of ups and downs in its long history, Tunisia has enjoyed several illustrious years while also seeing some forgettable lows. After missing out on the 2014 FIFA World Cup, the Africans have been on a resurgent run that ended with an unbeaten qualifying run and the return to the big stage.

At Russia 2018, the Eagles of Carthage will be appearing in the World Cup finals for the fifth time, their first since 2006. With six wins in their eight qualifying games, including a crucial victory over DR Congo, Tunisia came through unscathed in their qualifying campaign.

With just over a couple of weeks left till they make their grand return to the pinnacle of world football, The Hard Tackle picks apart the preliminary squad that Nabil Maaloul has picked and analyses whether his men have what it takes to make it a memorable comeback.

Drawn in Group G, alongside England, debutants Panama and one of the pre-tournament favourites Belgium, Tunisia have a difficult group to negotiate in the opening round of the tournament.

The Eagles of Carthage have a tough start to their World Cup campaign, with England and Belgium being their first two opponents. Nabil Maaloul’s men will then end their group stage assignment with a potential third place decider against Panama.

The Carthage Eagles are in Group G alongside Belgium, Panama and England. #Russia2018 #Africa pic.twitter.com/eYaU4Zxdgx

Nabil Maaloul has picked a preliminary 29-man squad, which will be trimmed down to 23 ahead of the June 4 deadline set by FIFA. Here are the players who have managed to make the cut:

There weren’t any major surprises on offer as Nabil Maaloul named his preliminary squad. But, there were a couple of unfortunate players who are being forced to miss the memorable flight to Russia due to injuries suffered at inopportune moments.

Youssef Masakni, who is arguably the most talented player in Tunisia, is not a part of Maaloul’s squad after sustaining a serious knee injury. The creative force for the Eagles of Carthage, his absence will hurt the African outfit dearly, and will put a lot of burden on the likes of Saif-Eddine Khaoui and Wahbi Khazri.

Khazri, in particular, seems to be a man on a mission after playing admirably for Rennes this season – 11 goals and 4 assists in 29 appearances. The 2016-17 season at Sunderland had been disastrous to say the least, but the player has put that disappointment behind him to regain his form well in time for the World Cup.

Another player who will be dearly missed by Tunisia is Aymen Abdennour, the Valencia defender who missed large parts of the season on-loan at Marseille as well as the last four qualifiers due to a hamstring injury. His experience and guile at the back will be hard to replace.

Tunisia had two different managers during their World Cup qualification campaign. They started under Henryk Kasperczak, who was managing the side for the second time in his storied career. But, the Pole was sacked after the Eagles of Carthage were eliminated in the quarter-finals of the 2017 Africa Cup of Nations.

Replacing Kasperczak was a coach who had also managed Tunisia previously, and was becoming a part of the national side for the fifth time, and second as head coach – Nabil Maaloul. In his latest stint with Tunisia, Maaloul has adopted a more dynamic approach, with a lot of focus on attacking.

Heading into the World Cup though, there are a few question marks, with the striker slot a big problem for the manager. Veteran striker Saber Khalifa does not have an international goal for nearly two years, while Ahmed Akaichi does not inspire a lot of confidence either.

As a result, we could see Maaloul deploy Wahbi Khazri in a sort of a false nine role that will also help him use his playmaking abilities, with Saif-Eddine Khaoui and Naim Sliti starting on the flanks. Midfield is more settled though, with Mohamed Amine Ben Amore being the anchor man, while Ferjani Sassi and Ghaylene Chaalali provide an energetic presence in the middle.

At the back, captain Aymen Mathlouthi is a certain starter, and will be a busy man against the likes of Belgium and England. Ali Maaloul will be another player under the spotlight, with his marauding runs down the left flank making the difference all too many times. 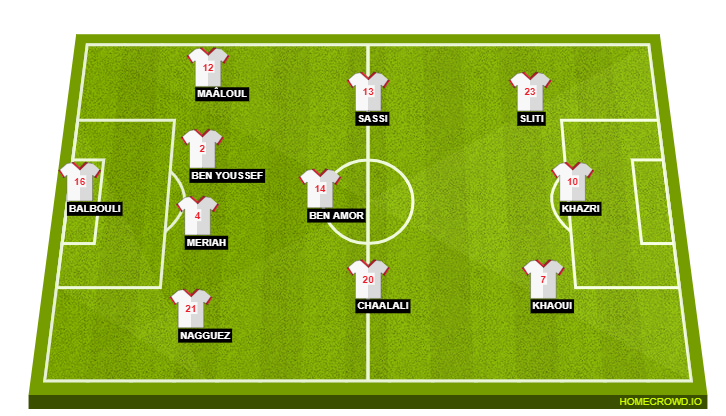 Tunisia surely couldn’t have asked for a worse draw ahead of their long-awaited return to the World Cup, with the presence of Belgium and England more or less killing off their slim chances of making the Last 16. But, stranger things have happened in the history of the competition, and if they manage to take a point off either side, anything could happen.

Conventional wisdom though, suggests that their best chance is to avoid the wooden spoon and beat Panama at the very least. Anything more than a third-placed finish would well be a bonus, but a 2-2 draw in a warm-up game against Portugal suggests that they certainly cannot be taken lightly by the bigger sides.