Pep Guardiola prepares for his first official game in charge of Manchester City as the Citizens face David Moyes’ Sunderland at the Etihad Stadium on Saturday.

There is no doubt that Manchester City, with a plethora of star talent and new signings, are favourites going into the match, but David Moyes is a veteran in the Premier League and could spring a surprise or two for the Spaniard.

Manchester City captain Vincent Kompany is unlikely to recover in time from a thigh injury, which leaves Pep Guardiola with the headache of choosing a centre-back to partner new signing John Stones. The Spaniard has Nicolas Otamendi and Eliaquim Mangala at his disposal, but neither has featured regularly thus far in pre-season.

Guardiola has a tendency of converting defensive midfielders to centre-backs — Javi Martinez and Javier Mascherano prime examples — and could play Fernando at the heart of his defence; he tried this against Arsenal in City’s final pre-season game, with the move proving successful in the first-half.

Elsewhere, Kevin De Bruyne is unlikely to feature in the match as he is lacking match fitness having been granted an extended break after Euro 2016. New signing Leroy Sane is unavailable for selection against the Black Cats. Bacary Sagna’s extended break due to his participation in Euro 2016 is most likely to guarantee a start for Pablo Zabaleta in Guardiola’s first game at the Etihad.

The Spaniard has deployed Raheem Sterling on the right wing during the last two pre-season matches, which has seen the former Liverpool forward displaying shades of his best football. The England international could be set for a start in place of Leroy Sane.

Iheanacho has had a brilliant pre-season and is most likely to feature at some point in the game. Elsewhere, Fernando might edge either Fernandinho or Otamendi for a start, but it is likely that Guardiola would choose a pure centre-back for his debut while Fernandinho’s skill set would combine well with Delph’s energy in midfield.

Pep Guardiola’s name has almost become synonymous with possession-based football. The Spaniard implemented the famous ‘tiki-taka’ playing style at Barcelona — a style that kept the focus on retaining the ball while slowly aiming to break down the defence. Guardiola modified it to an extent at Bayern Munich, adding some directness to the attack. It will be interesting to see what alterations the Spaniard makes in order to adapt to the English Premier League.

One thing the City supporters can expect to see is slick passing all over the field accompanied by high pressing. Guardiola’s pressing tactic is almost akin to his German counterpart Jurgen Klopp, which focuses on putting the pressure on opposition players with high pressing in advanced areas of the pitch. Defensively, along with the high pressing, the Spaniard generally likes a high line. 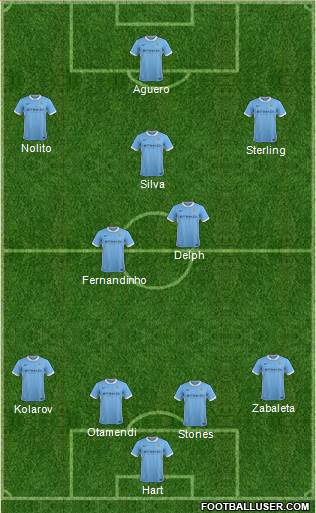 David Moyes has a selection headache ahead of the season opener against Man City, with fullback Billy Jones and midfielder Jan Kirchhoff likely to miss out due to injuries. Midfield general Lee Cattermole has picked up a knock and is set to miss the away match at the Etihad along with fellow midfielder Seb Larsson, who is facing up to six months on the sidelines having recently undergone surgery.

Star striker Jermaine Defoe has suffered a thigh injury, which could force Moyes to start Italian forward Fabio Borini. The Italian has been in good form in pre-season, scoring three goals for the Black Cats. The former Manchester United manager might go with the tried and tested pre-season pairing of Lamine Kone and Younes Kaboul at the back, with Bobby Khazri and Jeremain Lens almost guaranteed to start on the wing for Sunderland. All four of the new signings are available for selection but might find themselves restricted to the bench as Moyes aims to start his Sunderland career on a high note.

David Moyes is renowned for his compact defence, with the majority of his team’s attacks coming through the wings. The main focus is on delivering balls into the box for the strikers through sharp or floated crosses. The former Everton manager would have learned a great deal from his failures at Manchester United and Real Sociedad, which could come in handy at the Stadium of Light.

Moyes’ side is known to be defensively strong, with the focus more on counter-attacking than possession football. The Scot will look to crowd the midfield to contain City’s more creative players and is likely to entrust the job of shielding the defence to his former protege at Everton, Jack Rodwell. Moyes might deploy Januzaj as a number 10 instead of on the wings in an attempt to get the Belgian more involved into the game.

Moyes might spring a surprise by deploying McNair in the central midfield position, with Rodwell slotting in at right-back in place of O’Shea. Duncan Watmore is sure to play a part in the match and could start ahead of Januzaj. 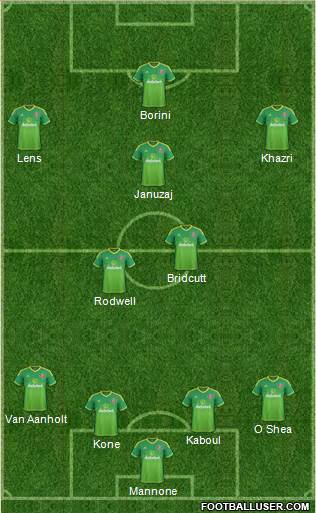 This is a match that will feature lots of goals as Manchester City have been vulnerable at the back during pre-season. Both clubs are yet to fully adapt to their new manager’s tactics, which could see a rather erratic game riddled with mistakes from both sides. Sunderland may be able to give City a tough fight, but Pep Guardiola’s men are likely to edge the Black Cats and snatch a narrow win to begin a new era on a positive note.