Bayern Munich will look to remain in the upper echelons of the Bundesliga when they welcome VfB Stuttgart to the Allianz Arena on Saturday.

The 2022/23 season is moving rapidly, and Matchday 6 begins in the Bundesliga this week. Defending champions Bayern Munich will aim to keep pace with the high-flying duo of SC Freiburg and Borussia Dortmund when they play hosts to VfB Stuttgart at the Allianz Arena on Saturday.

Bayern Munich seemed destined to cruise to another Bundesliga title after making a blistering start to the 2022/23 campaign with three successive wins. But successive draws against Borussia Monchengladbach and Union Berlin have pegged the reigning champions back, dropping them below SC Freiburg and Borussia Dortmund into third in the standings.

On the other hand, VfB Stuttgart might start getting branded as the draw specialists of the top flight. Four of Die Schwaben’s five Bundesliga games have ended in a stalemate, including the 2-2 result against Schalke last weekend. The run has left Pellegrino Matarazzo’s charges in the 12th spot on the table.

The corresponding fixture last season saw Stuttgart come from a goal down to hold Bayern Munich to a 2-2 draw in a match that saw Kingsley Coman get sent off in injury time. Ahead of the latest meeting between the two sides, The Hard Tackle takes a closer look at the encounter.

🗣️ He continues: "We will rotate and there will be several changes. Everyone is feeling good. Josh is also able to play. His eye was pretty swollen and colourful yesterday, but it's already looking better today and he can play." #FCBVfB pic.twitter.com/FKR5FZFB8J

Julian Nagelsmann has a fresh injury concern hampering his preparations ahead of the visit of VfB Stuttgart. On Saturday, the Bayern Munich manager will be bereft of the services of two first-team players.

Kingsley Coman is the latest player to pick up an injury after sustaining a hamstring strain in training, Nagelsmann has revealed in his pre-match press conference. The only other absentee for Bayern Munich against Stuttgart will be Bouna Sarr (knee).

Coman’s absence might compel Nagelsmann to bring Jamal Musiala back into the starting eleven. The German international will be one of the two wide attackers, the other being Leroy Sane, who should pick himself after an impressive performance against Inter Milan earlier this week in the UEFA Champions League.

Musiala and Sane will flank Thomas Muller, who will play behind Sadio Mane, whose output will be critical for Bayern against Stuttgart. Meanwhile, Leon Goretzka might fancy his chances of returning to the starting eleven this weekend.

While Marcel Sabitzer has admirably filled Goretzka’s void, the German international should reunite with Joshua Kimmich in the double pivot in the middle of the park. Meanwhile, the defensive unit might not see any changes, with Benjamin Pavard, Alphonso Davies, Matthijs de Ligt, and Lucas Hernandez set to cover Manuel Neuer between the sticks. 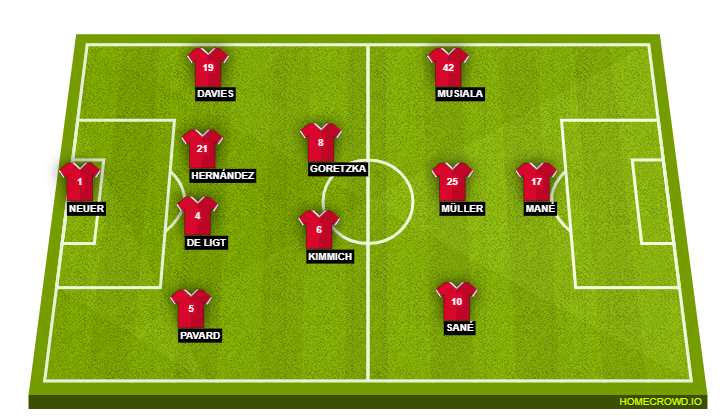 Like his counterpart in the Bayern Munich dugout, Pellegrino Matarazzo has a few pressing issues to deal with ahead of the trip to the Allianz Arena. The VfB Stuttgart manager will be without four first-team players on Saturday.

Josha Vagnoman is the latest absentee, with the 21-year-old defender serving a one-match ban after getting his marching orders against Schalke last weekend. Luca Pfeiffer is the other player suspended following his dismissal versus 1. FC Koln two weeks ago. Tanguy Coulibaly (toe) and Nikolas Nartey (thigh) are on the sidelines due to their respective injuries.

🗣️ Pellegrino #Matarazzo: "Serhou is making a good impression. I think that he should be ready to play 60 minutes, which means he’s an option for the starting XI.” #VfB | @Guirassy_19 | #FCBVFB pic.twitter.com/XnUFWFm3gs

Matarazzo prefers a formation with a back three, often rotating between variations of the 3-4-3 and the 3-5-2 depending on the opponent. And the Stuttgart manager should line his side up in a 3-4-1-2 system against Bayern Munich, with Florian Muller picking himself between the sticks.

Konstantinos Mavropanos has been a revelation for Stuttgart and should start alongside Hiroki Ito and Waldemar Anton in the central defensive unit. Meanwhile, Pascal Stenzel will replace the suspended Vagnoman as the right wing-back, with Borna Sosa starting on the opposite flank.

Matarazzo might choose a completely new strike partnership against Bayern Munich after giving summer signing Serhou Guirassy some words of encouragement during his pre-match presser. The 26-year-old should start alongside Silas in the final third on Saturday. 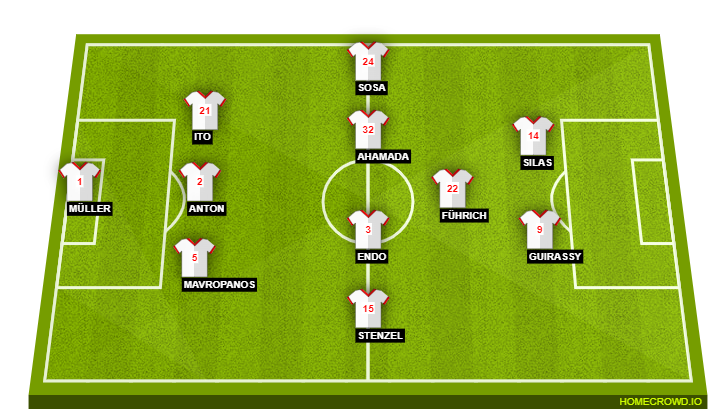 Robert Lewandowski has left a gaping hole in Bayern Munich’s offensive unit following his move to Barcelona. And every attacker now needs to shoulder an equal goalscoring burden this season, with Sadio Mane being the leading light for the Bundesliga champions. But one player who is revelling in the added responsibility is Jamal Musiala.

The German international has gradually progressed to become a pivotal player for Bayern Munich and has been among the goals this term. Musiala has been the most prolific player for the Bavarian giants, and his blossoming game bodes well for his team. Stuttgart will be the next hurdle for Musiala, and it will be interesting to see if he continues his run on Saturday.

No other team has beaten an opponent as often in the Bundesliga as Bayern Munich versus VfB Stuttgart (67). But Die Schwaben’s recent record against Bayern Munich is a cause for optimism heading into this weekend’s German top-flight clash at the Allianz Arena.

However, Bayern Munich will be desperate to get back to winning ways in the Bundesliga after two successive stalemates. And even though Stuttgart might be the draw specialists in the league right now, the visitors might have a tough time getting anything out of the game at the Allianz Arena, with Jamal Musiala and Sadio Mane likely to deliver the goods.