Netherlands will take on a buoyant Wales side at the Cardiff City Stadium on Wednesday in their latest UEFA Nations League encounter.

The fortnight-long international break continues this midweek, with national teams in Europe resuming their UEFA Nations League campaigns. And Wales will look to build on the successful culmination FIFA World Cup qualification campaign over the weekend when they play hosts to the Netherlands at the Cardiff City Stadium on Wednesday night.

The latest international break has been quite eventful for Wales, who started the month with a 2-1 defeat to Poland after squandering a one-goal lead. But the Dragons were clutch to bounce back with a 1-0 win in their FIFA World Cup qualifying play-off against Ukraine, sealing their place at Qatar 2022.

On the other hand, the Netherlands have been on a roll under the tutelage of Louis van Gaal, with the veteran manager turning the team’s form around superbly. The Oranje are yet to taste defeat in ten games under van Gaal, and they have started the month with a resounding 4-1 win over Belgium in Brussels.

The Netherlands had clinched a 3-2 win in an enthralling contest the last time they locked horns with Wales, with Arjen Robben scoring a match-winning brace. Ahead of the latest meeting between the two sides, The Hard Tackle takes a closer look at the encounter.

There were no casualties from the game against Ukraine for Wales, with Rob Page having the same squad at his disposal. But the caretaker manager could ring in the changes against the Netherlands on Wednesday, considering his players have been extremely busy in the international break thus far.

Danny Ward should replace Wayne Hennessey between the sticks, with Wales likely to line up in a 3-4-3 formation in front of the 28-year-old. The back-three should see Chris Mepham return to the starting eleven to sit at the base of the central defensive unit, with Chris Gunter and Ben Davies sitting alongside him.

Jonny Williams and Joe Morrell will have the task of keeping Netherlands’ creative midfielders quiet, with Frenkie de Jong and Steven Berghuis likely to be marked by the duo. Connor Roberts and Rhys Norrington-Davies will provide defensive support to the two midfielders, with the duo also holding the key during their forward forays.

Brennan Johnson had looked dangerous off the bench against Ukraine and should earn a start on the left side of Wales’s attack. Daniel James could thus move into a central role, with Kieffer Moore dropping to the bench. Page might rest Wales captain Gareth Bale, with Harry Wilson expected to start on the right-wing. 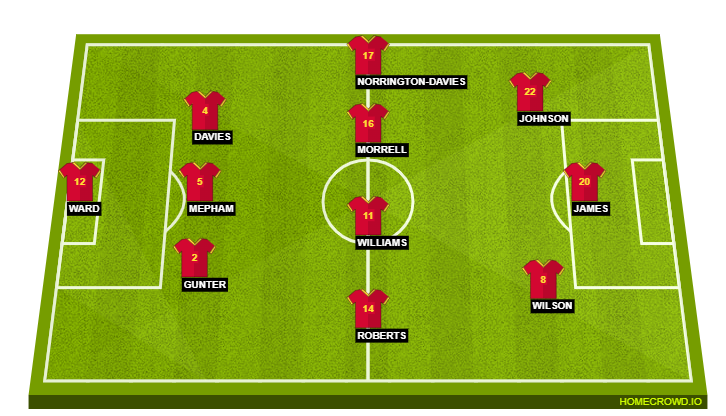 Unlike his counterpart in Wales’s dugout, Louis van Gaal has been dealt with a minor setback on the team news front ahead of the trip to Cardiff. Tim Krul suffered an injury in training and has pulled out of the squad, with the uncapped Kjell Scherpen replacing the veteran goalkeeper.

But Scherpen will unlikely get his debut against Wales, with Mark Flekken replacing Jasper Cillessen instead. Virgil van Dijk could also get some rest, with Stefan de Vrij expected to start in his place. Matthijs de Ligt should also return, coming into the team for Nathan Ake, with Jurrien Timber holding on to his spot.

Denzel Dumfries will continue as the right wing-back, but Tyrell Malacia could get an opportunity on the left flank. The midfield partnership should remain unchanged, with Frenkie de Jong and Davy Klaassen sitting in deeper positions and playing as the workhorses.

Steven Berghuis will continue to reprise the central role he has excelled in since Louis van Gaal started the experiment. The 30-year-old will play behind Memphis Depay and Cody Gakpo, who will look to stretch Wales’s backline with their ghosting runs. 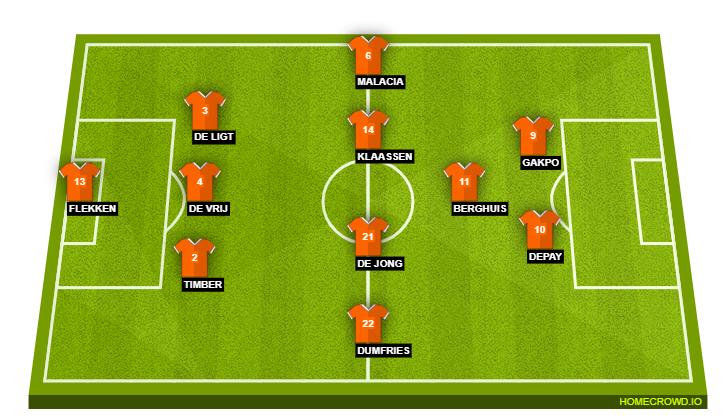 Frenkie de Jong continues to be a pivotal figure for the Netherlands, just like he is for Barcelona. But while the 25-year-old continues to go from strength to strength in the international arena, his future at the club level is highly uncertain amid the Catalan club’s financial struggles.

But de Jong will look to keep his head down and focus on the job at hand for his national side. The Barcelona midfielder is playmaking extraordinaire for the Netherlands, and another such showing will go a long way in helping the Oranje take a step towards clinching the top spot in Group 4 of UEFA Nations League A.

Matches between Wales and the Netherlands have usually gone only one way. Even when the Dragons have provided stiff competition to the Netherlands, the Oranje have come out with a win. The visitors have only trailed in one of their eight games against Wales, that being in a June 1996 World Cup qualifier before coming back to win that fixture.

The hosts should be in a glowing mood after clinching qualification to the 2022 FIFA World Cup. But the Netherlands might be too strong for Wales, with Louis van Gaal’s golden run set to continue on Wednesday. The Hard Tackle predicts a closely-contested affair, with the Netherlands coming out on top with the odd goal in three.