Chelsea will look to get back to winning ways when they welcome Wolverhampton Wanderers to Stamford Bridge on Saturday.

The 2021/22 Premier League season is nearing its climactic end, and there is still a lot at stake in the battles across the table. Chelsea will be desperate to evade getting dragged into the top-four race when they play hosts to Wolverhampton Wanderers at Stamford Bridge on Saturday afternoon.

Chelsea’s 2021/22 campaign has petered out horribly amid the destabilising effect of the ownership crisis. The Blues will soon be under new ownership, but Thomas Tuchel will be eager to see his men seal a top-four berth while keeping their focus on next week’s FA Cup final against Liverpool. However, that objective took a hit last weekend, as Everton handed Chelsea a shocking 1-0 loss at Goodison Park.

On the other hand, Wolverhampton Wanderers have seen their European hopes fade after a terrible run of one win in four games. Bruno Lage’s men are now looking over their shoulders, although a seventh-placed finish could still be on the cards for Wolves amid West Ham United’s dwindling form, which includes the ouster from the UEFA Europa League this week.

The reverse fixture ended in a drab 0-0 draw, which coincided with another sub-par run of form for Chelsea as their Premier League title hopes started to wash off. Ahead of the latest meeting between the two sides, The Hard Tackle takes a closer look at the encounter.

Thomas Tuchel has greeted a mixed bag of team news updates ahead of the visit of Wolverhampton Wanderers. On Saturday, the Chelsea manager will be bereft of the services of four first-team players due to various fitness issues.

Jorginho is the latest absentee due to a minor injury he sustained against Everton last weekend. The Chelsea vice-captain has joined Ben Chilwell (knee), N’Golo Kante (knock) and Callum Hudson-Odoi (Achilles) on the sidelines. But Andreas Christensen should be at Tuchel’s disposal after recovering from an illness.

However, Christensen may have to suffice with a spot on the bench, with Cesar Azpilicueta likely to keep his place on the right-hand side of the Chelsea back three. Azpilicueta will join Thiago Silva and Antonio Rudiger in the central defensive unit, with Edouard Mendy starting in goal.

Up ahead in midfield, Jorginho and Kante’s absence means Ruben Loftus-Cheek should retain his spot in the middle of the park, where he will line up alongside the returning Mateo Kovacic. The Croat’s fitness is also questionable, and it will not be surprising to see Mount drop into a midfield role in the second half if things are going Chelsea’s way.

Reece James and Marcos Alonso pick themselves as the two wing-backs, with the duo providing a threatening presence on the flanks. Christian Pulisic, Timo Werner and Hakim Ziyech have left a lot to be desired in the last few weeks, with Werner being slightly better than the other two.

Meanwhile, Romelu Lukaku is out of favour and should remain on the bench on Saturday. Kai Havertz will thus spearhead the Chelsea attack against Wolves, with Mason Mount playing off him as Chelsea’s creative supremo. Christian Pulisic could get the nod over Werner and Ziyech, getting a chance to impress ahead of a potentially busy summer amid links with Juventus. 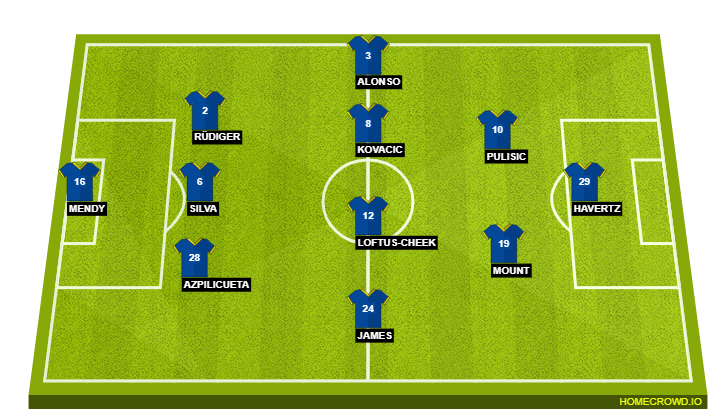 Like his counterpart in the Chelsea dugout, Bruno Lage has a new injury concern hampering his preparations ahead of the trip to Stamford Bridge. The Wolverhampton Wanderers manager will be without three first-team players on Saturday.

Nelson Semedo is the latest absentee for Wolves after sustaining a hamstring injury that has ended his season prematurely. Semedo has joined Daniel Podence and Max Kilman on the sidelines, with the duo unlikely to feature again this season either.

Bruno Lage will miss this weekend's trip to Chelsea after testing positive for Covid-19.

Willy Boly will continue to start on the right-hand side of Wolves’ back three in Kilman’s absence, with the 31-year-old joining Romain Saiss and captain Conor Coady in the central defensive unit. The trio will cover Jose Sa, with the Portuguese goalkeeper an automatic pick between the sticks against Chelsea.

Jonny Otto picks himself in Semedo’s absence, starting as the right wing-back for Wolves. Rayan Ait-Nouri is a certainty on the left flank, with the duo having more defensive work to do against Chelsea. Ruben Neves and Joao Moutinho will pair up in the middle of the park, with the change of system forcing Leander Dendoncker to the bench.

Raul Jimenez and Pedro Neto will benefit from Wolves reverting to the 3-4-3 formation. Jimenez will spearhead the attack against Chelsea, with Neto and Hwang hee-Chan starting as the wide-attacking duo. Fabio Silva will thus drop to the bench, with Francisco Trincao another potentially impact substitute. 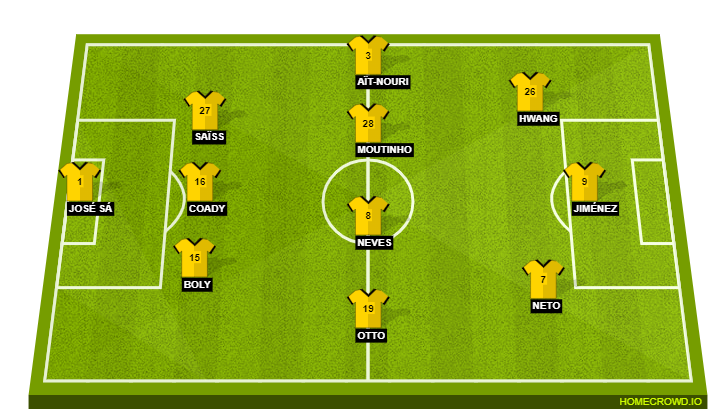 Ruben Loftus-Cheek has endured a rollercoaster ride this season, as he has been impressive when Thomas Tuchel has given him the opportunities to flourish but yet finds his Chelsea future up in the air. However, the English international is determined to fight for his place in the squad in the summer transfer window amid interest from several Premier League and Serie A clubs.

Loftus-Cheek will benefit from the absence of Jorginho and N’Golo Kante on Saturday, getting an extended run in the side as a result. That will give the 26-year-old the chance to stake his claim for a starting berth in next week’s FA Cup final against Liverpool, even if Jorginho and Kante return.

The game features two teams that have struggled to score goals consistently of late. Wolves have lost their last three Premier League games by an aggregate score of 5-0. They have not lost four consecutive league outings without scoring a single goal since March-April 1970 in the top flight.

Meanwhile, Chelsea (20/29) and Wolves (22/32) have conceded a league-high 69% of their Premier League goals this season in the second half of games. So it will hardly be surprising if the game gets dragged by the two sides until the dying embers before the deadlock is finally broken, if at all.

Chelsea could find a way to get past the Wolverhampton Wanderers defence, with Romelu Lukaku being the unlikely hero. Meanwhile, Wolves’ struggles in the final third will continue, helping Chelsea earn a clean sheet. The Hard Tackle predicts a 1-0 win for Thomas Tuchel’s charges.