Manchester United will be desperate to return to winning ways when they welcome Norwich City to Old Trafford on Saturday.

The games continue to come thick and fast across Europe, with around a month left for the curtains to fall on the 2021/22 season. Manchester United will be eager to keep their faint hopes of a top-four finish alive when they play hosts to Norwich City at Old Trafford on Saturday afternoon.

Manchester United’s 2021/22 campaign has been a colossal failure. What started as a promising season is culminating with the team spiralling horribly. Instead of challenging for several honours, the Red Devils have been in the doldrums and struggled for wins, which is reflected best in their recent run of just three wins in 12 games across all competitions. And the latest setback came in a 1-0 defeat to Everton last weekend.

On the other hand, Norwich City’s fate seems sealed with seven games left for the season to end. The Canaries are rooted to the bottom of the Premier League table, with 18th-placed Everton seven points clear while having a game in hand. Dean Smith’s men have shown signs of a turnaround, winning a relegation “six-pointer” against Burnley last weekend after holding Brighton & Hove Albion to a goalless draw.

The reverse fixture saw Manchester United eke a 1-0 win over Norwich City, with Cristiano Ronaldo scoring the match-winner from the penalty spot. Ahead of the latest meeting between the two sides, The Hard Tackle takes a closer look at the encounter.

🗣️ Ralf Rangnick: "Five players will still be missing for tomorrow and some of them probably also for the upcoming games. Fred, Scott [McTominay], Rafa Varane, Luke Shaw and Edinson Cavani – those are the five."#FFScout #FPL pic.twitter.com/DXNCgfuqvK

Ralf Rangnick has a new injury concern hampering his preparations ahead of the visit of Norwich City. On Saturday, the Manchester United interim boss will be bereft of the services of six first-team players, one of those being the suspended Mason Greenwood.

Fred and McTominay’s absence leaves Manchester United in a spot of bother, with Nemanja Matic the only natural holding midfielder at Rangnick’s disposal. The Serb is thus an automatic pick in the double-pivot, with Paul Pogba expected to start in a withdrawn role.

Bruno Fernandes will reprise his usual no. 10 role, with the Manchester United talisman having the license to roam freely around the pitch. The Portuguese international will play off compatriot Cristiano Ronaldo, who will spearhead the Manchester United attack against Norwich City. Jadon Sancho and Anthony Elanga should be the two wide attackers, with Marcus Rashford dropping to the bench.

David de Gea is a sure starter at the opposite end, with the Spaniard taking his place between the sticks. Victor Lindelof will continue as Harry Maguire’s partner at the heart of the Manchester United defence, with Alex Telles another player who picks himself. As for the last change, Diogo Dalot should replace Aaron Wan-Bissaka, who was dreadful against Everton last weekend. 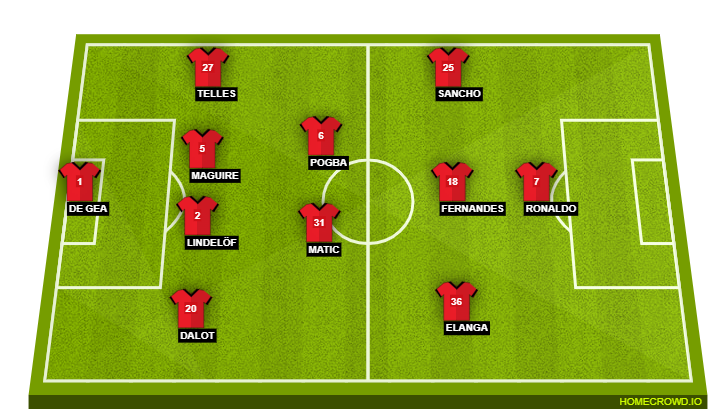 Unlike the man in the Manchester United dugout, Dean Smith has been handed a boost on the team news front ahead of the trip to Old Trafford. The Norwich City manager will be without five first-team players on Saturday.

The good news is that Billy Gilmour (COVID-19) and Przemyslaw Placheta (ankle) are available again after overcoming their respective issues. The duo’s return leaves Ozan Kabak (hamstring), Andrew Omobamidele (back), Adam Idah (knee), and Joshua Sargent (ankle) as the only player on the sidelines.

🗣 DS: “Płacheta is back from injury and training with us and Gilmour is back from his Covid issue.”#NCFC | #MUNNOR pic.twitter.com/GpdFqAvFEG

Meanwhile, Brandon Williams is ineligible to take on parent club Manchester United, with Dimitris Giannoulis an automatic pick in the left-back berth in his absence. Max Aarons, who has recently been linked with Manchester United, will start on the right flank, with Grant Hanley and Ben Gibson pairing up at the heart of the Norwich defence.

Up ahead in midfield, Mathias Normann and Kenny McLean will form the double-pivot. The duo will have the onus to keep things tight in the middle of the park, looking to keep Bruno Fernandes quiet, shutting off the supply line to Cristiano Ronaldo in extension.

Pierre Lees-Melou will play in an advanced midfield position, although he will often drop deep to support McLean and Normann. Kieran Dowell and Milot Rashica should be the two wide men, with the pair being direct in their approach. Finally, Teemu Pukki will spearhead the Norwich attack against Manchester United. 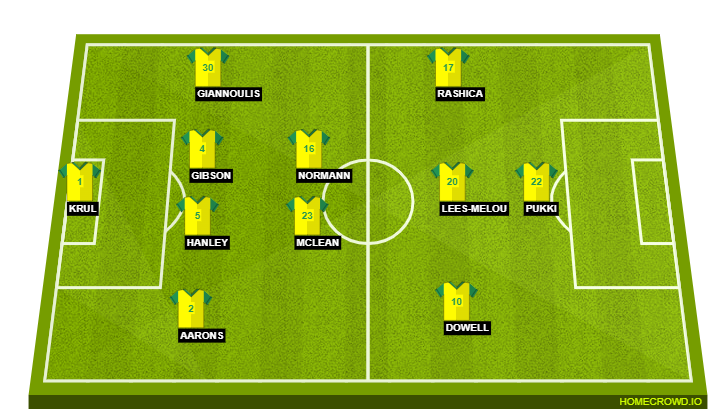 Pogba continues to be surrounded by a lot of noise, as is usually the case with the mercurial French midfielder. But there has been little substance in the 2018 FIFA World Cup winner’s performances lately. Pogba’s recent comments have hardly done him any favours, even though he is eager to end his horrible stint with Manchester United.

Pogba continues to be linked with some of the most high profile clubs in Europe, with Juventus, Real Madrid, and Paris Saint-Germain keen on signing him. But while he can bolster the squads of each of those teams, the 29-year-old needs to remain focused on the objective at hand at Manchester United, no matter the distractions.

So with the season finishing in a month, Ralf Rangnick will hope that Pogba gets his head in the right place, helping Manchester United culminate a forgettable campaign strongly. That starts with the match against Norwich City on Saturday.

Manchester United can’t buy a win right now even if the players tried to the best of their abilities. The dressing room is fractious, and the egos are getting in the way of the team’s objectives. And that is giving the Red Devils’ opponents to take points away from them week after week.

Norwich City will thus have a more than decent chance to topple Manchester United on Saturday. However, the Canaries do not have the attacking quality to score more than once, while their defensive frailties will enable Manchester United to breach Tim Krul’s goal at least once. In the end, the two teams should share the spoils, with the game ending in a 1-1 draw.