AC Milan will aim to consolidate their place atop the Serie A table when they play hosts to Empoli at San Siro on Saturday.

The action is coming at a breakneck pace across Europe, and the 2021/22 Serie A season will resume with Matchday 29 this weekend. Four matches will be on show on Saturday, with the proceedings culminating at San Siro, where AC Milan will take on Empoli.

Consistency seems to have become the norm for AC Milan in Serie A, even if that has not spilt over in European competitions. The Rossoneri will likely take the Scudetto battle down the wire, as they are currently two points ahead of local rivals Inter Milan at the top of the standings, having played a game more. And Milan grabbed the initiative with a crucial win over Napoli last weekend, leaving the Partenopei third.

On the other hand, a lonely mid-table finish beckons Empoli this season. While the Blues have lost 12 of the 28 games thus far in the ongoing campaign, a relegation scrap is unlikely, with 18th-placed Venezia ten points behind. But breaking into the top half seems improbable, with Sassuolo seven points ahead.

AC Milan clinched a hard-fought 4-2 win over Empoli in the reverse fixture, with Franck Kessie, Alessandro Florenzi, and Theo Hernandez on target. Ahead of the latest meeting between the two sides, The Hard Tackle takes a closer look at the encounter.

🗣️ "My greatest satisfaction? Making the fans happy"
The Boss ahead of tomorrow's matchup

Stefano Pioli has greeted a mixed bag of updates on the team news front ahead of the visit of Empoli. On Saturday, the AC Milan manager will be bereft of the services of only two first-team players due to suspension and injury.

The good news is that Alessio Romagnoli is back at Pioli’s disposal after serving a suspension. But another key defender in Theo Hernandez is unavailable due to a one-match ban, with the French international joining Tiemoue Bakayoko (muscle injury) on the sidelines.

Hernandez’s void in the left-back slot will likely be filled by Alessandro Florenzi, with Davide Calabria taking up the right-back berth. Romagnoli might not be back in the starting eleven straight away, with Pierre Kalulu doing a solid job in his absence. Kalulu should continue at the heart of the AC Milan defence alongside Fikayo Tomori, with Mike Maignan an automatic pick in goal.

Up ahead in midfield, the solid pairing of Ismael Bennacer and Franck Kessie will combine in the double-pivot. The duo will be tasked with shielding the AC Milan backline while pushing them forward with purpose. Brahim Diaz will reprise the No. 10 role, and the Spaniard will need to step up after some unconvincing performances this season.

Rafael Leao, Milan’s in-form player, will be the key man on the left flank, looking to be direct in his approach. Alexis Saelemaekers should start on the right-wing, with Olivier Giroud expected to spearhead the Milan attack against Empoli instead of Zlatan Ibrahimovic. 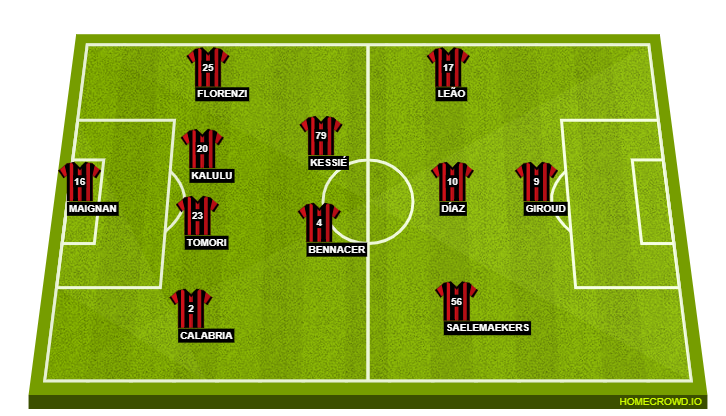 Unlike his counterpart in the AC Milan dugout, Aurelio Andreazzoli does not have any new roster issues hampering his preparations ahead of the trip to San Siro. The Empoli boss will be without two first-team players on Saturday.

Riccardo Marchizza (ACL) and Nicolas Haas (knee) are the absentees for Empoli, with the former out for the remainder of the season, while the latter will soon be in contention to feature.

Andreazzoli will line Empoli up in his trademark 4-3-2-1 formation, also called the Christmas tree. The system will feature three central midfielders who will largely remain compact to restrict Brahim Diaz’s output.

The two attacking players behind central striker Andrea Pinamonti will remain narrow, looking to exploit the half-spaces around the AC Milan centre-backs. Liam Henderson and Nedim Bajrami will have the task of carving out the space in the final third, leaving the full-backs to provide width on the flanks.

Kristjan Asllani will sit at the base of the midfield trifecta, looking to shield the Empoli defence along with Szymon Zurkowski and Filippo Bandinelli. Simone Romagnoli and Sebastiano Luperto will form the central defensive partnership against AC Milan, with Petar Stojanovic and Fabiano Parisi being the two full-backs. There is no looking past Guglielmo Vicario between the sticks. 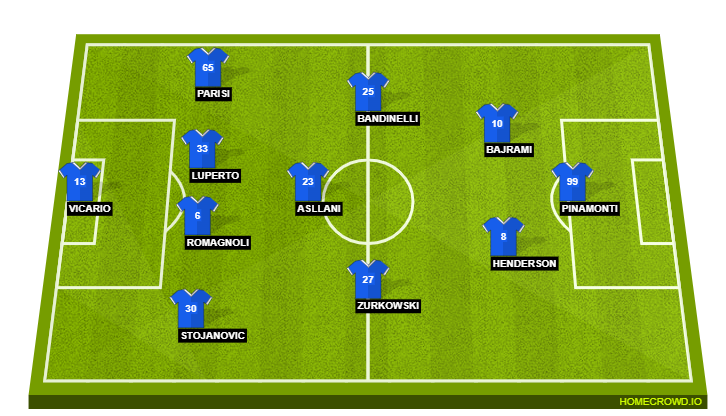 Rafael Leao has lately been the go-to player for Stefano Pioli, having become more consistent with every passing week this season. The Portuguese forward already had the ability to win matches on his own. But by making the difference week in week out, he has become a truly pivotal figure for AC Milan.

With Olivier Giroud and Zlatan Ibrahimovic battling some fitness issues, Leao has the onus on him to make a meaningful impact against Empoli. With the visitors expected to sit deep and absorb the pressure from AC Milan, the 22-year-old’s directness will come into play. And another impressive display could attract even more prospective suitors, with Barcelona recently joining the race to sign him.

AC Milan’s recent form has been largely promising, with the Rossoneri piling up one crucial win after another. On the other hand, visitors Empoli have been one of the worst performers in Serie A in the new year, amassing the joint-lowest points in Serie A in the last three months.

While Empoli could theoretically frustrate Milan for long periods, the hosts will likely release the pressure with a goal in the first half. And as the match progresses, the in-form Rafael Leao should make a lasting impact, inspiring the Rossoneri to a 2-0 win on Saturday.