Chelsea will look to consolidate their place inside the Premier League top four when they take on Burnley at Turf Moor on Saturday.

Premier League football resumes this weekend with Gameweek 28 of the 2021/22 season. The latest round of fixtures begins with the lunch-time kick-off between Leicester City and Leeds United before Burnley and Chelsea take the field at Turf Moor on Saturday afternoon.

On the other hand, 2022 continues to be a troubling year for Chelsea, even though they continue to eke out close wins. The Blues are set for new ownership to take charge, with Roman Abramovich taking the shocking decision to sell the club amid rising tensions in Ukraine. Amidst all this, Thomas Tuchel’s men most recently came from a goal down to beat Luton Town 3-2 in the FA Cup fifth round, bouncing back from their Carabao Cup final defeat to Liverpool.

Burnley and Chelsea played out a 1-1 draw in the reverse fixture, with Matej Vydra and Kai Havertz finding the back of the net. Ahead of the latest meeting between the two sides, The Hard Tackle takes a closer look at the encounter.

Sean Dyche has one new injury concern hampering his preparations ahead of the visit of Chelsea. On Saturday, the Burnley manager could be bereft of the services of as many as five first-team players, although he could soon have a fully-fit squad at his disposal.

Dyche is sweating over the fitness of Ben Mee, who is recovering from a knock to his knee. The Burnley boss described Mee’s situation as touch and go, but the veteran defender is likely to be available to take on Chelsea. The same cannot be said about Erik Pieters (knee), Dale Stephens (thigh), Matej Vydra (groin) and Johann Berg Gudmundsson (calf).

With Mee likely to be available, the Burnley captain will form the central defensive partnership with James Tarkowski. Connor Roberts and Charlie Taylor will be the two full-backs, with the duo largely staying pinned back to close down the half-spaces for Chelsea’s creative midfielders to work around.

Nick Pope will be stationed in the Burnley goal and will be in for a busy evening on Saturday. The Clarets will be set up in their usual 4-4-2 formation featuring twin blocks of four that will aim to be disciplined to rob Chelsea of open spaces to exploit.

Ashley Westwood and Josh Brownhill will look to hold the fort in the middle of the park, with Aaron Lennon and Dwight McNeil being the two wide midfielders. They will be direct in their approach, acting as supply line of chances for the two imposing strikers, Wout Weghorst and Maxwel Cornet. Weghorst will also be a big factor during set-pieces, along with Mee and Tarkowski. 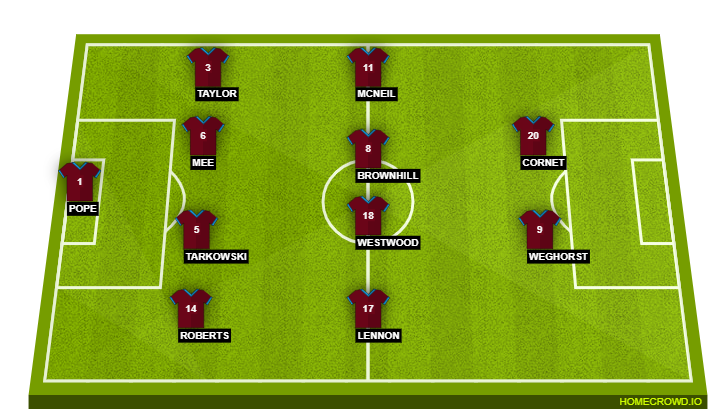 Unlike his counterpart in the Burnley dugout, Thomas Tuchel does not have many pressing roster issues to contend with ahead of the trip to Turf Moor. The Chelsea boss might only be without three first-team players on Saturday in the worst-case scenario.

The good news is that Thiago Silva (knock), Trevoh Chalobah (groin) and Hakim Ziyech (Achilles) are fit and available. Cesar Azpilicueta (knock) and Andreas Christensen (Achilles) face late fitness tests to determine their availability, but Tuchel will unlikely take a risk with them. Ben Chilwell is a long-term absentee due to his knee injury.

Thomas Tuchel is here to look ahead to #BurChe! 🎬 https://t.co/4Oh6okLihR

Azpilicueta’s potential absence is unlikely to hurt Chelsea as Reece James has regained fitness, much to Tuchel’s delight. James will line up as the right wing-back, adding a much-needed dimension to Chelsea’s creative output, with the English international carrying a lot of threat on the flank.

Marcos Alonso is a shoo-in on the left side, and the Spaniard will need to be at his best to trouble a stubborn Burnley defence. N’Golo Kante and Mateo Kovacic will likely get the nod in the middle of the park, and the duo will aim to push Chelsea forward with purpose when on the ball.

Silva and Chalobah’s availability means Tuchel will name his strongest defensive setup, with the fit-again duo joining Antonio Rudiger at the back. Edouard Mendy will also return to the starting eleven, replacing Kepa Arrizabalaga between the sticks.

At the opposite end, Timo Werner’s stunning performance against Luton Town might have earned him a starting berth again. The German international will play off Kai Havertz, who will replace Romelu Lukaku to spearhead the Chelsea attack. Hakim Ziyech and Mason Mount will contest for the final spot in the attacking unit, with Ziyech expected to start as Chelsea’s creative midfielder. 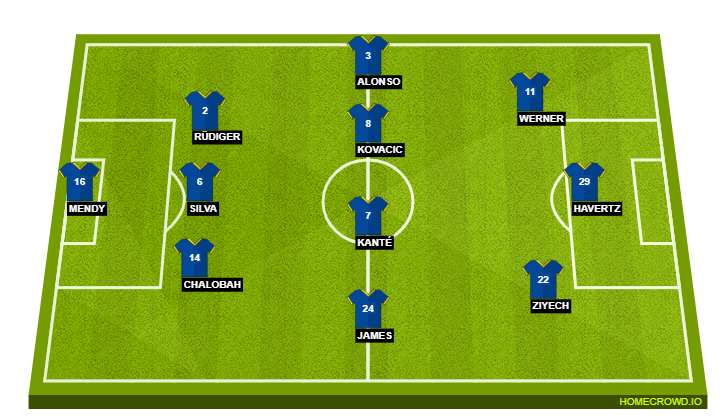 During a difficult start to 2022, one player who has been sorely missed by Chelsea is Reece James. The English international’s absence left the Blues without an additional creative outlet, rendering their offensive play frustratingly predictable, which is why they have struggled to win games comfortably.

James’ return also provides Chelsea with a defensive boost, with the 22-year-old’s burst of space coming in handy against quick wide-attackers. Most importantly, though, James will re-introduce another element in Chelsea’s attacking gameplay, making them more difficult to defend against for opponents, including a stubborn Burnley unit.

Reece James’ return does give Chelsea an instant creative boost. But the Blues will find Burnley a tough team to get past, especially considering the Clarets’ recent resolute form. The hosts are even more difficult to bypass at home, making Saturday’s outing a game of patience for Chelsea.

At the other end, Wout Weghorst’s irritating presence might trouble the Chelsea defenders to some extent, but Edouard Mendy will be largely comfortable between the sticks. And as the game wears on, Timo Werner could be the man to make the difference again. The Hard Tackle predicts a 1-0 win for Chelsea, who will end a troubling week for Roman Abramovich on a positive note.