Liverpool will aim to reach the FA Cup quarter-finals when they welcome Norwich City to Anfield for a fifth-round clash on Wednesday.

The FA Cup is back for a rare midweek run, with just 16 teams left in the competition. By the time the weekend arrives, the field will be narrowed down to eight teams. Two of the clubs vying for a place in the quarter-finals will take to Anfield on Wednesday night when Liverpool will play hosts to Norwich City.

Liverpool entered the FA Cup in the third round, beating Shrewsbury Town 4-1 in their maiden outing in the competition. The Reds then defeated Cardiff City 3-1 in the previous stage to set up the clash with Norwich City. Jurgen Klopp’s men are the most in-form team in England right now, having won their last ten games across all competitions, including the Carabao Cup final against Chelsea this past weekend.

On the other hand, Norwich City clinched back-to-back 1-0 wins over Charlton Athletic and Wolverhampton Wanderers to reach the FA Cup fifth round. But the Canaries have struggled other than that, winning only one of their last six games across all competitions while losing their previous three contests.

Liverpool and Norwich City have already locked horns thrice in the 2021/22 season, with the Reds winning all three fixtures (twice in the Premier League and once in the Carabao Cup). Ahead of the latest meeting between the two sides, The Hard Tackle takes a closer look at the encounter.

We’re LIVE with the boss as he previews our #EmiratesFACup tie with Norwich City 🎙#LIVNOR https://t.co/dJsaJvCzsw

Jurgen Klopp does not have any new fitness issues hampering his preparations ahead of the visit of Norwich City. On Wednesday, the Liverpool manager will be bereft of the services of two first-team players.

Thiago Alcantara is the latest player to be sidelined after sustaining a hamstring injury in the build-up to the Carabao Cup final against Chelsea this past weekend. The only other player likely to miss out is Roberto Firmino, who is recovering from a muscle injury.

Caoimhin Kelleher should line up between the sticks again for Liverpool after his heroics in the Carabao Cup final, which subsequently helped him garner praise from Jurgen Klopp. In front of the Irish shot-stopper, the Reds will set up in their usual 4-3-3 formation, with Klopp likely to ring in the changes.

Ibrahima Konate and Joe Gomez should pair up at the heart of the Liverpool defence, with Conor Bradley and Kostas Tsimikas starting as the two full-backs. Up ahead in midfield, James Milner will be handed a rare start, with the veteran midfielder sitting at the base.

Harvey Elliott and Curtis Jones will provide defensive support to Milner, although the duo will be primarily tasked with pushing Liverpool forward. Finally, Diogo Jota, Divock Origi, and Takumi Minamino will likely form the attacking unit, with Mohamed Salah and Sadio Mane in line for a rest. Luis Diaz will probably be an option off the bench for Liverpool. 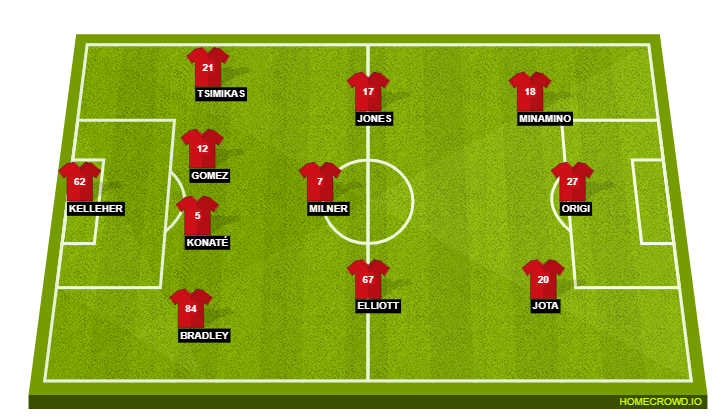 Unlike his counterpart in the Liverpool dugout, Dean Smith has a new roster issue to contend with ahead of the trip to Anfield. The Norwich City manager will likely be without six first-team players on Wednesday.

The only minor positive news is the return of Jakob Sorensen, who should be fit enough to shrug off a knee injury to make himself available. But former Liverpool defender Ozan Kabak (shoulder) is one of four players sidelined with a fitness issue, with Brandon Williams (knock), Andrew Omobamidele (back), Max Aarons (muscle injury), and Adam Idah (knee) also likely to be unavailable.

🗣 DS: “Brandon Williams and Max Aarons haven’t trained since the weekend as both got knocks.”#NCFC | #EmiratesFACup pic.twitter.com/uz4sBxhS5g

The big blow comes through Grant Hanley’s absence, with the Norwich City captain suspended. In Hanley’s stead, Christoph Zimmermann will join Ben Gibson at the heart of the Norwich defence against Liverpool, with Sam Byram and Dimitris Giannoulis being the two full-backs.

Up ahead in midfield, the onus will be on Billy Gilmour and Pierre Lees-Melou to keep things tight. The duo will line up alongside Kenny McLean in the midfield trifecta, with the latter looking to provide the forward thrust when afforded the opportunity.

Finally, the attacking trio will need to be clinical on Wednesday to put Liverpool under pressure. The onus will thus be on Teemu Pukki, Josh Sargent and Milot Rashica to be at their efficient best in and around the Liverpool box to somehow clinch a shock win in the FA Cup fifth round. 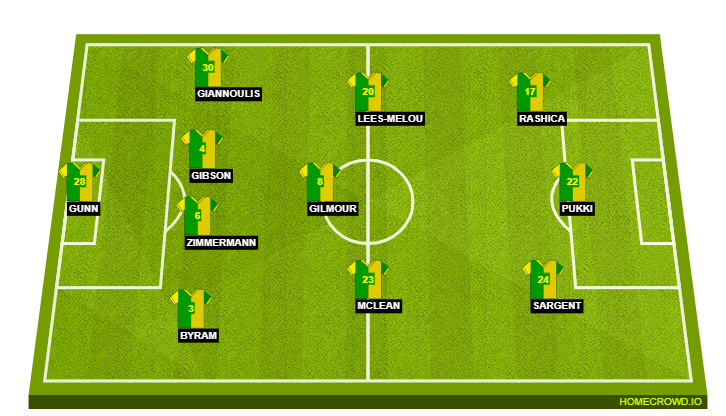 The competition for places is ramping up significantly with each passing transfer window, and a player who seemed nailed on not too long ago is now fighting for his spot in the side. Diogo Jota was on top of the world till a minor injury struck him, and Luis Diaz has taken advantage of his absence by putting in a couple of tremendous performances.

Diaz was again in delightful touch against Chelsea, leaving Diogo Jota with an uphill task to retain his spot as an attacking mainstay. While Norwich City won’t be as tricky a test as Chelsea, Jota will still need to rediscover his best form to ensure Diaz does not usurp him, making the FA Cup clash a key outing for him.

Liverpool will likely line up with a much-changed side, whereas Norwich City will start with their strongest eleven. Despite that, the difference in sheer quality between the two sides will quickly become palpable, with Liverpool expected to retain control of the proceedings for much of the game.

Norwich City will only threaten fleetingly, with Liverpool expected to cruise to a big victory. Diogo Jota and Takumi Minamino should be on target for the Reds in what will eventually be a 3-0 win to seal a safe passage through to the FA Cup quarter-finals for the first time since the 2014/15 season.