Manchester United will be desperate to return to winning ways when they welcome Brighton & Hove Albion to Old Trafford on Tuesday.

The games continue to come thick and fast across Europe, and in England, a postponed match-up will be held at Old Trafford. Manchester United will play hosts to Brighton & Hove Albion in this game, with the two teams locking horns on Tuesday night.

The 2021/22 season continues to be one to forget for Manchester United. The Red Devils have lost just one game since Ralf Rangnick took over as the interim manager, but a string of draws have pegged them back considerably. The latest setback came in a 1-1 draw with Southampton, as they went ahead through a Jadon Sancho goal before being held due to a strike from Che Adams.

Speaking of stalemates, Brighton & Hove Albion have played 12 draws in 23 outings thus far in the Premier League this season. But the Seagulls are currently on a seven-game unbeaten streak in the top-flight, with this run of results helping them remain in contention for European qualification.

Manchester United came from a goal down to beat Brighton 2-1 in the corresponding fixture last season, with Mason Greenwood scoring a late winner. Ahead of the latest meeting between the two sides, The Hard Tackle takes a closer look at the encounter.

Ralf Rangnick has been handed a major boost on the team news front ahead of the visit of Brighton & Hove Albion. On Tuesday, the Manchester United interim boss will be bereft of the services of only four first-team players.

The good news is that Fred is back at Rangnick’s disposal after testing negative for COVID-19. Fred’s return leaves Eric Bailly (ankle), Nemanja Matic (shin) and Edinson Cavani (hip) in the treatment room, while Mason Greenwood remains indefinitely suspended.

Fred should return to the starting eleven straight away, with Paul Pogba likely to make way for the Brazilian. Pogba has featured for Manchester United without a break since returning from a long-term hamstring injury and could do with a breather. So Fred will accompany Scott McTominay and Bruno Fernandes in the middle of the park.

Up ahead in attack, Anthony Elanga might replace Marcus Rashford, who was dreadful apart from the moment when he set Jadon Sancho up for his goal against Southampton. Elanga and Sancho will be the two wide men for Manchester United, with Cristiano Ronaldo leading the line against Brighton.

The only other change to the starting eleven will likely come at the back, with Alex Telles possibly replacing Luke Shaw. Telles and Diogo Dalot will be the two marauding full-backs, with Harry Maguire and Raphael Varane pairing up at the heart of the Manchester United defence. Finally, there is no looking past David de Gea in the Manchester United goal. 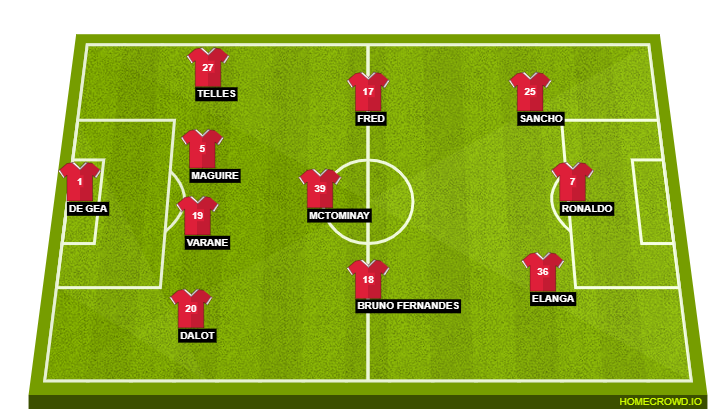 Like his counterpart in the Manchester United dugout, Graham Potter does not have any new roster issues hampering his preparations ahead of the trip to Old Trafford. On Tuesday, the Brighton & Hove Albion boss will be missing the services of only two first-team players.

Jeremy Sarmiento and Enock Mwepu are the only two absentees for Brighton, with the duo still recovering from their respective thigh injuries. Potter, who will be taking charge of his 100th Premier League game on Tuesday, will line his side up in a 3-5-2 formation, with Robert Sanchez an automatic pick between the sticks.

"We're really pleased with Jakub. You see the quality he has every day.

"Scoring is actually quite random! You need a bit of luck but the fact he's getting those chances is really encouraging." #BHAFC pic.twitter.com/e1pb18SVlA

Joel Veltman, Lewis Dunk and Adam Webster should form the central defensive partnership, with the trio remaining compact to rob Cristiano Ronaldo of space to exploit around the box. Tariq Lamptey and Marc Cucurella will likely be the two wing-backs, with the duo’s marauding runs holding the key in the creative side of things.

The two wing-backs will also provide width higher up the pitch while flanking the three midfielders – Adam Lallana, Yves Bissouma and Jakub Moder. The trio will have dynamic roles in the middle of the park as all three will need to do a lot of defending while also pushing forward with purpose when the opportunity presents itself.

Potter has three options at his disposal to form the strike partnership, although Neal Maupay seems certain to start. On Tuesday, the Frenchman should be partnered with Leandro Trossard, with former Manchester United striker Danny Welbeck likely to feature off the bench at Old Trafford. 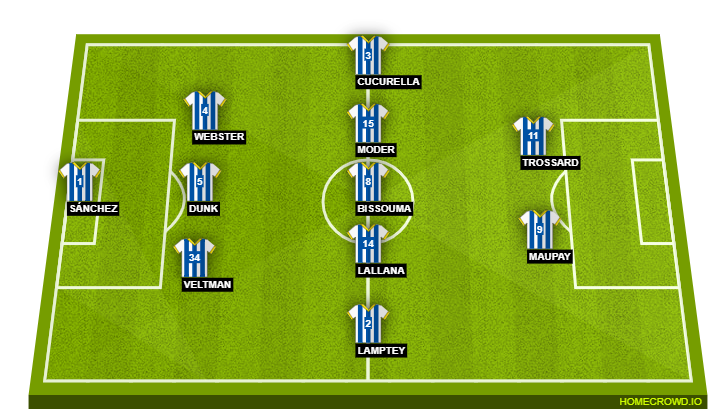 For a player who is often panned by fans and pundits alike, Fred has proven to be one of the most important players for Manchester United this season. The Brazilian midfielder has only ever been an underperformer when deployed outside his comfort zone as a holding midfielder.

But when used as a box-to-box midfielder, Fred tends to make a meaningful impact in games. The shift in formation to the 4-3-3 has worked well in his favour, which is why his absence has been felt dearly in the last two games. The Brazilian international will now be raring to come back and guide Manchester United to a much-needed win.

Manchester United and Brighton seem to be the two draw specialists in the Premier League, with the duo’s unbeaten runs being stretched by several stalemates. And Tuesday could be another such occasion to witness them drop two points each.

As is usually the case in their games, Manchester United should grab the lead, with Jadon Sancho once again being on target. But Danny Welbeck should come off the bench to break Manchester United’s hearts again as the minutes wear on late in the match. The Hard Tackle predicts a 1-1 draw between the Red Devils and the Seagulls on Tuesday.