Manchester City will hope to consolidate their place atop the Premier League table when they welcome Wolverhampton Wanderers at the Etihad on Saturday.

The games continue to come thick and fast across Europe, and Gameweek 16 of the 2021/22 Premier League season will kick off this weekend. The action on Saturday will get underway at the Etihad, with Manchester City playing hosts to Wolverhampton Wanderers in the lunchtime match.

Manchester City have been up against some stiff competition in the defence of their Premier League crown this season. The Citizens, Liverpool and Chelsea have been separated by the barest of margins thus far, with the slightest dropped points kicking off a merry-go-round among the top three. That is exactly what happened last weekend, as Manchester City capitalised on Chelsea loss to West Ham United to take the top spot on the table.

On the other hand, Wolverhampton Wanderers have made steady progress under the tutelage of Bruno Lage, establishing themselves as one of the most hardened teams in the Premier League. While goals have been hard to come by for Wolves, only Chelsea, Liverpool and Manchester City boast better defensive records. And it is their stubborn performances that have kept them in touch with the top-four hopefuls.

The corresponding fixture last season saw Manchester City earn a hard-fought 4-1 win over Wolves, with a late onslaught helping the Citizens stave off the threat of their visitors. Ahead of the latest meeting between the two sides, The Hard Tackle takes a closer look at the encounter.

PEP 💬 When you have an injury in your ankle and two months of holiday, you will recover incredibly well – but when you play every three days, you will have niggles. But he [Foden] is getting better. He will dictate and say how he feels after games.

Pep Guardiola has several new injury concerns hampering his preparations ahead of the visit of Wolverhampton Wanderers. On Saturday, the Manchester City manager could be bereft of the services of as many as six first-team players.

While the quartet will likely be available to take on Wolves, Guardiola will not risk them from the get-go, keeping them as backup options instead. So, the Manchester City manager’s team selection decisions are more or less expected, which is a surprise, considering his tendency to rotate his troops aggressively.

Raheem Sterling, Jack Grealish and Bernardo Silva will line up in the final third as the attacking trio. Sterling should spearhead the Manchester City attack after the experiment with Grealish as the central figure yielded mixed results. Grealish will instead line up on the left flank, with Silva taking up the right-wing berth.

In midfield, Kevin De Bruyne and Ilkay Gundogan will pull the strings for Manchester City, with Rodri sitting at the base of the three-man unit. At the back, with Laporte likely to be rested, Ruben Dias and John Stones pick themselves in the central defensive unit, with Kyle Walker and Joao Cancelo certain to start as the two full-backs. Finally, in goal, there is no looking past Ederson Moraes. 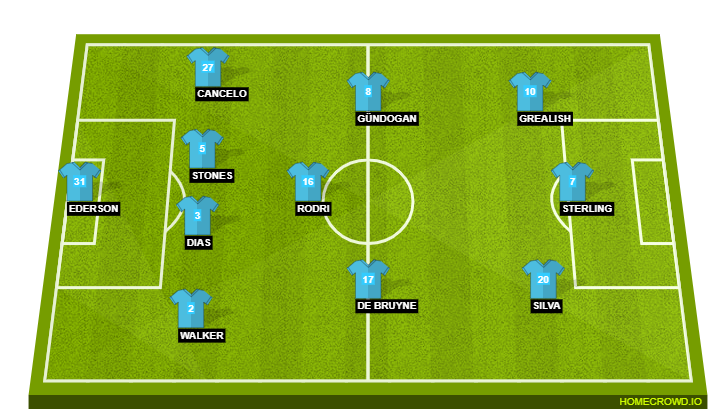 Like his counterpart in the Manchester City dugout, Bruno Lage also has a few pressing issues to deal with ahead of the trip to the Etihad. The Wolverhampton Wanderers manager could be making do without as many as four first-team players on Saturday.

However, Lage has also received some good news, with Conor Coady (ankle) and Rayan Ait-Nouri (knock) being passed fit after they sustained their issues last weekend against Liverpool. In addition, Willy Boly could be available after recovering from a thigh injury. However, he will likely be on the bench, with the Wolves boss expected to ease him back into action.

As for those likely to miss out, Jonny (knee), Yerson Mosquera (hamstring) and Pedro Neto (knee) remain on the sidelines, while Marcal (COVID-19) is only expected to return next week. Nonetheless, Lage has enough resources at his disposal to line up a strong side against Manchester City.

In goal, Jose Sa is an automatic pick, with Wolves set to line up in a 3-4-3 formation in front of him. The central defensive trifecta will once again be formed by Max Kilman, Conor Coady and Romain Saiss, with the trio looking to remain compact at the back to snuff out the space for Manchester City to work around.

Ait-Nouri, who is becoming a coveted figure in the transfer market, and Nelson Semedo will be the two wing-backs. The duo will drop deep to create a back five in the defensive phases while providing the width high up the pitch. They will flank Ruben Neves and Leander Dendoncker, who will form a stubborn central midfield unit.

Finally, the attacking unit should feature Raul Jimenez, Hwang Hee-chan and Adama Traore. Each player brings something different to the side, with Traore carrying a threat with his blistering runs, while Jimenez and Hwang will provide a goal threat and look to be fluid in their movements. 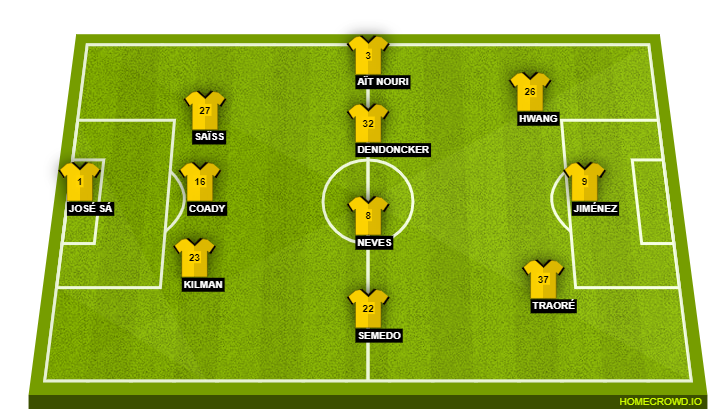 Things can change quickly in football, and no player embodies this better at Manchester City than Bernardo Silva. Back in the summer transfer window, the Portuguese international was in the doldrums at the Etihad, with Pep Guardiola revealing that he wanted to leave the club.

Fast forward to December, and Silva is the most in-form player in the Premier League and has become a talismanic figure for Manchester City. The 27-year-old can simply do no wrong right now, having scored six goals in his last eight appearances. Having taken on the goalscoring mantle from Ilkay Gundogan, Silva will again hold the key for Manchester City when Wolves pay them a visit on Saturday.

Wolverhampton Wanderers have garnered a reputation for being stubborn customers at the back under Bruno Lage. They almost eked out a goalless draw against Liverpool last weekend, only for Divock Origi to snatch two points late in the game. And they should also frustrate Manchester City on Saturday, just like every other opponent this season.

However, the Citizens are indomitable in the Premier League at the moment, as evidenced by the trouncing of Watford last weekend. While Wolves will leave Manchester City exasperated at times, the hosts should have more than enough quality to clinch a comfortable win. The Hard Tackle predicts a 2-0 victory for Pep Guardiola & co.