Chelsea will aim to progress to the UEFA Champions League Round of 16 as Group H winners when they face Zenit St Petersburg on Wednesday.

The UEFA Champions League group stage will culminate on Wednesday, with the final eight games of the opening phase of the competition being played on the day. In Group H, Chelsea will lock horns with Zenit St Petersburg at the Krestovsky Stadium, hoping to secure the top spot ahead of Juventus.

Zenit St Petersburg have unsurprisingly been the third-best team in Group H and are certain to finish third ahead of Malmo FF irrespective of the result on Wednesday due to a better head-to-head record. The Russian champions have fared decently in the past month, having not been beaten in their last five games in all competitions (W2 D3).

On the other hand, Chelsea booked safe passage through to the Champions League Round of 16 long ago, with the only formality being the title of Group H winners. The Blues are currently perched atop the standings after beating Juventus in their Matchday 5 clash last month. Still, they will need to match or better the Bianconeri’s result on Wednesday against Malmo to remain on top.

The Champions League holders do not enter the game on Wednesday in the best of forms, having been beaten 3-2 by West Ham United this past weekend. That result was their first defeat since a run of two losses to Manchester City and Juventus in September.

However, after beating Zenit 1-0 in the reverse fixture in the same month courtesy of a goal by Romelu Lukaku, Chelsea will fancy their chances of coming back from St Petersburg with all three points. Ahead of the latest meeting between the two sides, The Hard Tackle takes a closer look at the encounter.

Sergei Semak: "Chelsea are a top quality team and it’s hard to say in which areas they are strongest"

Sergei Semak does not have many pressing roster issues hampering his preparations ahead of the visit of Chelsea. On Wednesday, the Zenit St Petersburg manager will only be bereft of the services of two first-team players, with Dmitri Chistyakov suspended and Stanislav Kritsyuk out with a knee injury.

While Semak prefers a 4-2-3-1 formation in most games, the threat posed by the Chelsea attack could force him to use a more pragmatic 5-4-1 setup. Veteran goalkeeper Mikhail Kerzhakov will take his place between the sticks.

In front of Kerzhakov, Dejan Lovren will be responsible for marshalling the Zenit backline. The experienced Croat will be partnered by Yaroslav Rakitskyi and Douglas Santo at the heart of the defence, while Vyacheslav Karavaev and Danil Krugovoy will be the two full-backs.

Karavaev and Krugovoy will primarily sit back to contain the threat of the Chelsea attackers and aim to remain compact to deny the visitors space to exploit. However, when the opportunities arise, the two full-backs will bombard up the respective flanks and provide the width in the final third.

Up ahead in midfield, Wilmar Barrios and Daler Kuzyayev will have the onus on them to keep things tight in the middle of the park and keep a check on Mason Mount’s output. Out wide, Malcom and Claudinho will be the chief attacking threats for Zenit against Chelsea.

The Brazilian duo will provide a direct threat to the Chelsea defence with their willingness to run at their three centre-backs. This approach will also bring Sardar Azmoun into the fray, with the Iranian striker leading the line for Zenit versus Chelsea, leaving Artem Dzyuba on the bench as a backup option. 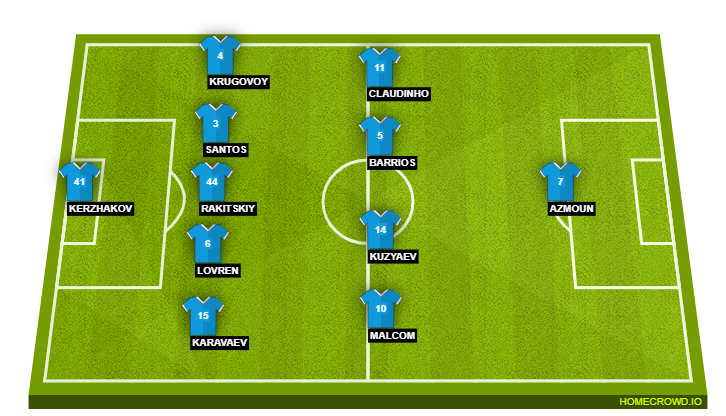 Unlike his counterpart in the Zenit St Petersburg dugout, Thomas Tuchel has plenty of concerns to deal with ahead of the trip to the Krestovsky Stadium. On Wednesday, the Chelsea boss will have to make do without six first-team players.

Jorginho is the latest player to be sidelined, with the Italian international recovering from a back injury. The Chelsea vice-captain has joined Trevoh Chalobah (hamstring), Ben Chilwell (knee) and N’Golo Kante (knee) on the sidelines. In addition, Mateo Kovacic is in self-isolation after testing positive for COVID-19.

The Croat had been due to resume full training this week and has been sidelined immediately. Apart from the quintet that is certain to miss out, Tuchel is also sweating over the fitness of Marcos Alonso (back) and Kai Havertz (ankle), although the duo trained on Monday.

However, Tuchel is unlikely to take a chance with either player, considering he has ample cover in his squad for both of them. In Alonso’s stead, Cesar Azpilicueta will start as the left wing-back, with Reece James retaining his spot on the right flank, although Callum Hudson-Odoi and Christian Pulisic are also options to reprise the left wing-back role.

Speaking of Hudson-Odoi, the Englishman should return to the starting eleven to provide a direct threat in the final third. Hudson-Odoi will join Mason Mount and Timo Werner in the Chelsea attack, with Pulisic, Hakim Ziyech and Romelu Lukaku the backup options. The major concern for Tuchel is filling Jorginho’s void.

Saul Niguez was sub-par in a recent outing and is unlikely to start. Instead, Ross Barkley could get a chance to impress, starting alongside Ruben Loftus-Cheek in the middle of the park. The two central midfielders will provide cover to Andreas Christensen, Thiago Silva and Antonio Rudiger, who, in turn, will seek to protect Edouard Mendy in the Chelsea goal better than they did against West Ham United. 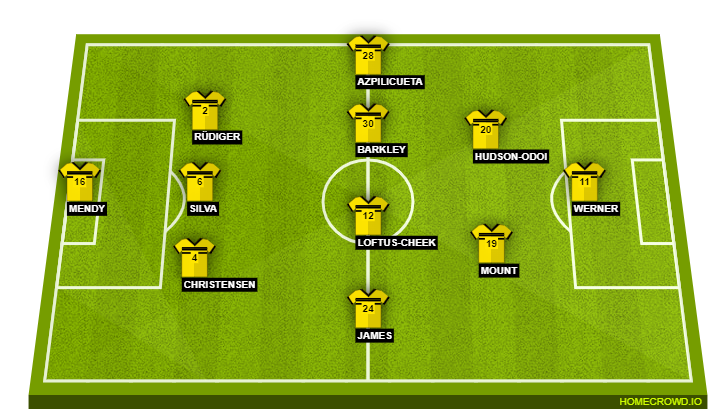 Chelsea’s recent downturn in form can solely be attributed to one factor – their vulnerabilities in midfield. The absence of N’Golo Kante and Mateo Kovacic has been felt dearly, leaving Jorginho exposed more often than not due to his lack of mobility. And with Jorginho now sidelined himself, the onus will be on Ruben Loftus-Cheek to be the leader in the middle of the park.

The Englishman is enjoying a tremendous resurgence this season and has impressed whenever he has reprised the holding midfield role. Likely to be deployed in such a spot against Zenit St Petersburg, it will be up to Loftus-Cheek to shore things up in the middle of the park. If he excels in his duties, Chelsea will be on their way to record a big win and clinch the top spot in Group H.

Zenit St Petersburg made Chelsea work hard for all three points in the reverse fixture, and Wednesday’s match should be no different. The Russian champions will even fancy beating the UEFA Champions League holders because of their soft underbelly in midfield.

However, Ruben Loftus-Cheek should rise to the occasion and ensure Zenit St Petersburg do not get on top of Chelsea. In the final third, Callum Hudson-Odoi should deliver the goods on his return to the side, with Chelsea grabbing a narrow 2-1 win to confirm their status as Group H winners irrespective of how Juventus fare against Malmo.