West Ham United will aim to confirm the top spot in Group H of the UEFA Europa League when they take on Rapid Wien at the Allianz Stadion on Thursday.

The penultimate round of fixtures in the group stage of the UEFA Europa League will be played on Thursday. West Ham United will be in action on the day, as they lock horns with Rapid Wien at the Allianz Stadion, hoping to secure the top spot in Group H.

Rapid Wien have endured a disappointing group stage campaign thus far in the UEFA Europa League, having won just one of their first four games. However, the Green-Whites are in contention to finish second in their group, meaning their European journey remains alive. Heading into this week’s contest, Rapid Wien beat SCR Altach 1-0.

On the other hand, West Ham United have been in fine touch this term, although they lost their most recent outing 1-0 to Wolves. As far as the Europa League is concerned, the Hammers are perched atop Group H and certain to feature in the competition’s knockout phase. However, a win here will confirm their status as group winners.

The reverse fixture, played at the London Stadium last month, saw West Ham eke out a 2-0 win over Rapid Wien, with Declan Rice and Said Benrahma on target. Ahead of the latest meeting between the two sides, The Hard Tackle takes a closer look at the encounter.

Rapid Wien have been affected by injuries to a myriad of players ahead of the visit of West Ham United. On Thursday at the Allianz Stadion, the hosts will be bereft of the services of as many as six first-team players.

With several defenders unavailable, the back four pretty much picks itself. Martin Moormann and Emanuel Aiwu will pair up at the heart of the Rapid Wien defense, while Filip Stojkovic and Maximilian Ullmann will be the two full-backs. In goal, Paul Gartler is a certainty in the absence of Strebinger.

Up ahead in midfield, the onus will be on Srdjan Grahovac and Robert Ljubicic to keep things tight in what will be a rather defensive-minded double pivot. Marco Grull will be the third midfielder for Rapid Wien, with the 23-year-old providing the creative impetus higher up the pitch.

Ercan Kara will lead the line for Rapid Wien against West Ham, with Grull playing off of him. Out wide, Taxiarchis Fountas and Christoph Knasmullner will provide the width higher up the pitch, with the duo carrying a threat with their directness. 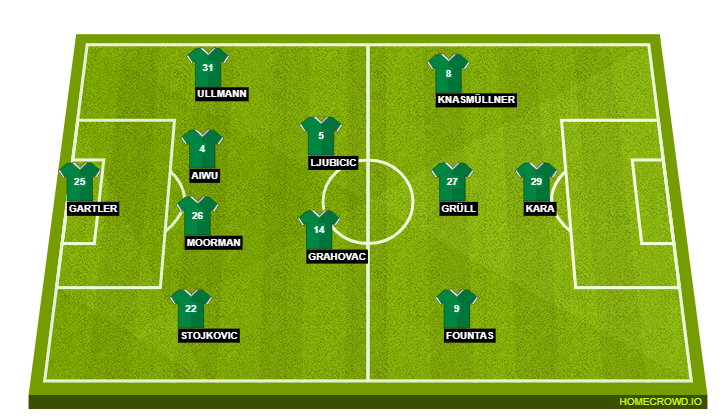 Unlike his counterpart in the Rapid Wien dugout, David Moyes barely has any fitness issues hampering his preparations ahead of the trip to the Allianz Stadion. On Thursday, the West Ham United manager will only have to do without one first-team player, with Angelo Ogbonna sidelined with a long-term knee injury.

Alphonse Areola will be stationed between the sticks for West Ham, who will line up in a 4-2-3-1 formation against Rapid Wien. At the heart of the Hammers’ defence, Kurt Zouma will have Craig Dawson for company, while Vladimir Coufal will hope to impress from the right-back slot. On the opposite flank, Aaron Cresswell is a certainty.

Up ahead in midfield, Declan Rice will continue to provide a solid base. The English international will also look to carry the ball into the final third, with captain Mark Noble sitting alongside him in the double pivot.

Manuel Lanzini will reprise the No. 10 role, looking to thread the openings higher up the pitch. Said Benrahma will move out onto the right-wing due to Lanzini’s selection, with Arthur Masuaku looking to make an impression with his forays down the left flank. Finally, Michail Antonio will spearhead the West Ham attack, with Jarrod Bowen being the option on the bench to replace him. 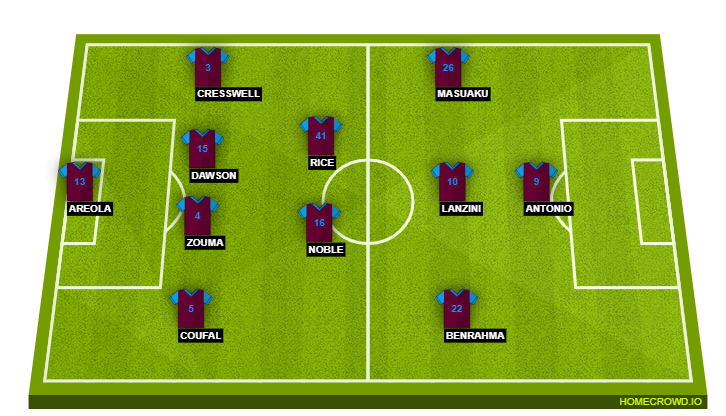 Michail Antonio has been by far the best player for West Ham United across competitions this season, with Declan Rice also being a key figure for them. However, if there is one player who has stood out in the UEFA Europa League, it is Said Benrahma.

The Algerian forward has scored three goals in only two starts in the competition, and the two goals last time out against Genk earned West Ham a crucial point that helped book their place in the Round of 32. Benrahma will need to be on the money once again, especially with Antonio being off the boil in the last couple of games.

West Ham United have been far and away the best team in Group H of the UEFA Europa League, and they should once again be dominant in a game in Europe. However, with Rapid Wien in dire need of a win, the hosts should take the game to the Hammers.

Such an outlook will likely open up the spaces at the back for West Ham to exploit and Said Benrahma, with his ghosting runs, will provide a major threat. Eventually, the visitors should prevail here with a clean sheet in tow, which is why The Hard Tackle predicts a 2-0 win for David Moyes & co.