AC Milan will be desperate to get their first win of the 2021/22 UEFA Champions League when they face FC Porto at San Siro on Wednesday.

Matchday 4 of the UEFA Champions League group stage will draw to a close on Wednesday, with eight matches set to be played on the day. One of the most intriguing fixtures will be played at San Siro, where AC Milan will play hosts to FC Porto in a Group B clash.

2021/22 has been a tale of different fortunes in different competitions for AC Milan. The Rossoneri are unbeaten in Serie A and are only behind table-toppers Napoli on goal difference. The polar opposite is the case in Europe, with Stefano Pioli & co. losing each of their first three games, leaving their hopes to qualify for the Round of 16 dangling by a thread.

On the other hand, FC Porto are in a much more promising situation, as they are level on points with second-placed Atletico Madrid, meaning a win on Wednesday will likely leave them with their fate in their own hands. Back home, the Dragoes have a record not too dissimilar to AC Milan, as they sit perched atop the Primeira Liga table and are unbeaten after the first ten matchdays.

The reverse fixture, played at Estadio do Dragao, saw Porto eke out a narrow 1-0 win over Milan, with Luis Diaz scoring the game’s only goal. Ahead of the latest meeting between the two sides, The Hard Tackle takes a closer look at the encounter.

Adding the finishing touches ahead of #MilanPorto 👌

Stefano Pioli has several pressing roster issues hampering his preparations ahead of the visit of FC Porto. On Wednesday, the AC Milan manager could be bereft of the services of as many as six first-team players due to various injuries.

The likes of Alessandro Plizzari (knee), Mike Maignan (wrist), Alessandro Florenzi (meniscus), Junior Messias (muscle injury), Samu Castillejo (hamstring) and Ante Rebic (ankle) will miss out against Porto. However, there is some good news, as Franck Kessie is back at Pioli’s disposal after serving his suspension in the reverse fixture last month.

Kessie should be stationed in the midfield double pivot, with Sandro Tonali expected to be his partner in the middle of the park ahead of Ismael Bennacer. In front of the two central midfielders, Brahim Diaz will reprise the no. 10 role, looking to pull the strings higher up the pitch.

Rafael Leao and Alexis Saelemaekers should be the two wide attackers, with the duo bringing more directness in the final third. As for the central striker, Olivier Giroud is likely to lead the line for AC Milan, with Zlatan Ibrahimovic being an option off the bench.

At the back, Alessio Romagnoli could get the nod to pair up with Fikayo Tomori at the heart of the AC Milan defence, with Davide Calabria and Theo Hernandez picking themselves as the two full-backs. Finally, in goal, Ciprian Tatarusanu will continue to deputise for Maignan. 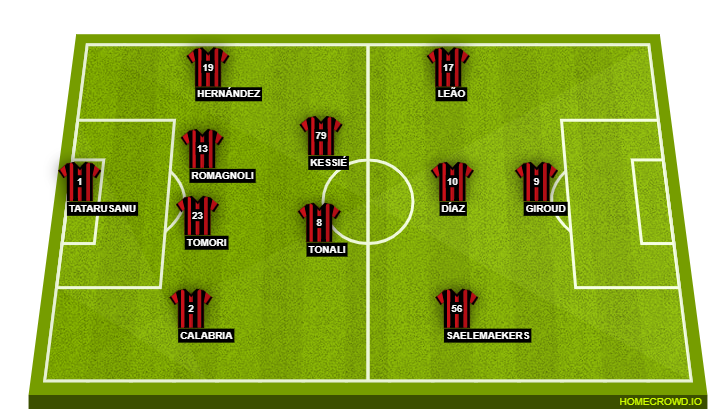 Unlike his counterpart in the AC Milan dugout, Sergio Conceicao barely has any injury concerns to cater to ahead of the trip to San Siro. On Wednesday, the FC Porto boss will only have to make do without one first-team player, with Wendell missing with a knee injury.

With a near full-strength squad at his disposal, Conceicao ought to name his strongest lineup against AC Milan. In goal, Agustin Marchesin is expected to take up his usual spot, with FC Porto set to line up in a 4-4-2 formation in front of him.

At the heart of the Porto defence, Pepe ought to have Chancel Mbemba for company while out wide, Jesus Corona and Zaidu Sanusi are expected to be the two full-backs. Up ahead in midfield, the onus will be on Marko Grujic and Sergio Oliveira to provide the control, while Otavio and Luis Diaz will be the wide men.

Diaz, in particular, will be the danger man for Porto, providing a major goal threat from the left-wing, just as he had in the reverse fixture last month. Finally, the strike partnership will likely be formed by Evanilson and Mehdi Taremi. 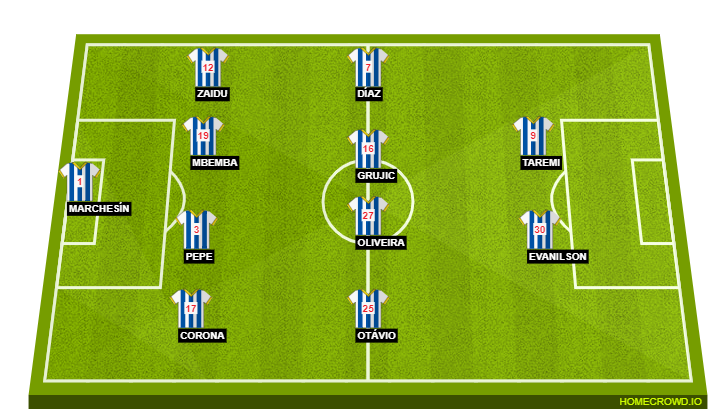 AC Milan have been uncharacteristically frugal in front of goal in the UEFA Champions League this term. And a major reason for their struggles is the lack of control that the midfield unit has had in the three games so far. That has largely been down to the absence of Franck Kessie in half of their campaign to date this term.

Now set to return from his suspension, Kessie’s output in the middle of the park will once again hold the key for Milan. If the Ivorian cannot make an impression, the Rossoneri can very well bid goodbye to their hopes of qualifying for the Round of 16.

This ought to be a close one between AC Milan and FC Porto. Stefano Pioli has admitted to the pitfalls of his side in the reverse fixture in the build-up to the game. The AC Milan manager is sure to make amends to ensure the Rossoneri finally get off the mark in the UEFA Champions League this term.

With Atletico Madrid taking on Liverpool later in the day, a win will do either side a world of good. And AC Milan are likely to come out as the victors in this one, narrowly eking out a 2-1 win over FC Porto to possibly throw the race for the second spot in Group B wide open.