Juventus hope to bounce back to winning ways when they welcome Sassuolo to the Allianz Stadium in a rare midweek Serie A clash.

Matchday 10 of the 2021/22 Serie A season is underway, and on Wednesday, as many as six games will be on show. The action on the day will kick off with three different games being played simultaneously, and one of these fixtures will see Juventus hosting Sassuolo at the Allianz Stadium.

Juventus have done well to bounce back from a slow start to their 2021/22 campaign. Massimiliano Allegri & co. had failed to win their first three games of the season but have since been on a nine-game unbeaten run. And although the Bianconeri have not been at their fluent best, the signs of improvement have been evident.

Sassuolo, on the other hand, have not quite been performing to potential in the early stages of the new season. The Neroverdi have won just three of their first nine games, losing four times, which has left them tottering at 13th on the Serie A table. Having said that, Alessio Dionisi & co. are on their best run of form currently, having lost just one of their last four games.

The corresponding fixture last season saw Juventus grab a hard-fought 3-1 win over Sassuolo, with Danilo, Aaron Ramsey and Cristiano Ronaldo being on target while Gregoire Defrel scored for the visitors. Ahead of the latest meeting between the two sides, The Hard Tackle takes a closer look at the encounter.

Massimiliano Allegri has a couple of fresh injury concerns hampering his preparations ahead of the visit of Sassuolo. On Wednesday, the Juventus manager will be bereft of the services of two first-team players, with Federico Bernardeschi (shoulder) and Moise Kean (muscle injury) both on the sidelines.

Allegri has, meanwhile, confirmed four of the players who are going to start against Sassuolo, with Mattia Perin replacing Wojciech Szczesny in goal. In front of Perin, Juventus will line up in a 4-3-3 formation.

Matthijs de Ligt is another confirmed starter, with the Dutchman partnering with Leonardo Bonucci at the heart of the Juventus defence. Out wide, there is no looking past Danilo and Mattia De Sciglio as the two full-backs.

Up ahead in midfield, the good news comes in the form of Adrien Rabiot’s availability after recovering from COVID-19. However, the French international is unlikely to make the starting lineup, with Rodrigo Bentancur, Arthur and Manuel Locatelli expected to form the three-man unit in the middle of the park.

Finally, the attacking unit will be adorned by Federico Chiesa and Paulo Dybala, both of whom have already been confirmed as starters by Allegri. The duo will be deployed out wide by the Juventus manager while Alvaro Morata will lead the line for Juventus against Sassuolo. 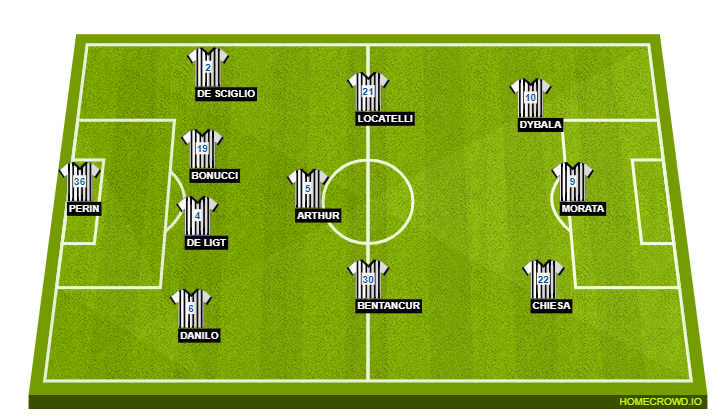 Like his counterpart in the Juventus dugout, Alessio Dionisi has a few key players out on the sidelines ahead of the trip to the Allianz Stadium. On Wednesday, the Sassuolo manager will have to make do without four first-team players.

Jeremie Boga continues to remain unavailable due to his ongoing recovery from an illness, while the likes of Filip Djuricic (hamstring), Pedro Obiang (heart problems) and Nicolas Schiappacasse (knee) are out on the sidelines as well.

Veteran goalkeeper Andrea Consigli will be deployed between the sticks, and in front of him, Sassuolo will line up in a 4-2-3-1 formation. The defensive line shielding Consigli will likely consist of Mert Muldur, Vlad Chiriches, Gian Marco Ferrari and Rogerio.

Up ahead in midfield, the onus will be on Maxime Lopez and Davide Frattesi to keep things tight and frustrate Juventus on their forays deep into their half. As for the attacking unit, the key man for Sassuolo will be Domenico Berardi, who will line up on the right flank.

On the left-wing, Hamed Traore will provide the explosiveness in the final third, while Giacomo Raspadori and Gianluca Scamacca will be required to provide the finishing touches to the chances created for them over the course of the game. 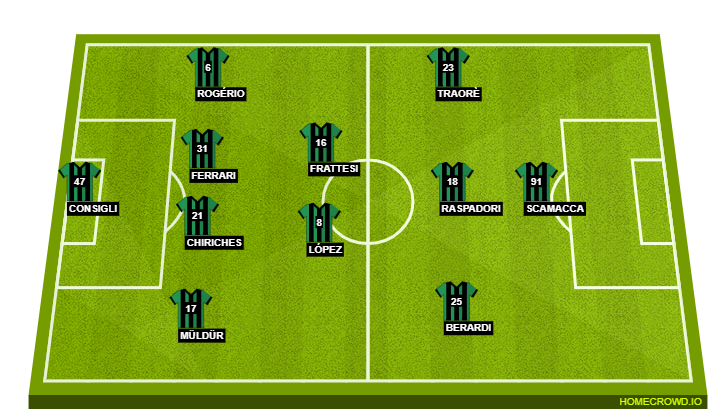 Paulo Dybala seems to be stepping up well since the departure of Cristiano Ronaldo, but if there is one player who continues to go from strength to strength at Juventus, it is Federico Chiesa. The Italian international took no time to become a key player under Andrea Pirlo last term. And in the early stages of the new season, he has continued his upward trajectory.

Against Sassuolo, Chiesa will once again hold the key for Juventus, as in the final third, the onus will be on him to carve out the openings. At the same time, the 24-year-old will also provide a major goal threat, along with Dybala. A key player in a tricky game for Juventus.

In the last few weeks, Juventus have been showing signs of regaining the fighting spirit that made them a tough team to beat in their first stint under Massimiliano Allegri. Such a spirit should keep the hosts in good stead when Sassuolo pay them a visit, especially with their visitors exhibiting some positive signs of their own.

Having said that, the Juventus defence should prove to be frugal enough to keep Domenico Berardi and his partners at bay for the most part. As far as their attacking output is concerned, the Bianconeri should come good on Wednesday, with Federico Chiesa and Paulo Dybala making the difference and earning them all three points in a 2-0 win.