The Premier League action this weekend ends with a blockbuster affair as Manchester United welcome Liverpool to Old Trafford on Sunday.

The curtains will fall on Gameweek 9 of the 2021/22 Premier League season on Sunday, with three matches on show on the day. And the action on the day will draw to a close with a mouthwatering affair, as Manchester United play hosts to bitter rivals Liverpool at Old Trafford.

Manchester United have seen the optimism borne out of a decent opening month of the season as well as a strong performance in the transfer market in the summer dissipate quickly. The Red Devils have failed to win each of their last four domestic games, with the only respite coming in the form of twin wins in the UEFA Champions League.

The latest of these was a 3-2 victory against Atalanta, as they came from two goals down to seal a second half comeback win to ease some of the pressure on Ole Gunnar Solskjaer. Liverpool, like Manchester United, were in action in the Champions League as well, and also grabbed a win by a similar scoreline.

In the Reds’ case, they were given a run for their money by La Liga champions Atletico Madrid, as they battled hard to clinch a 3-2 win at the Wanda Metropolitano. Liverpool are, in fact, the only unbeaten team in the Premier League at the moment across all competitions, but sit second on the table behind Chelsea heading into Gameweek 9.

The corresponding fixture last season was a pulsating affair, as Liverpool came from a goal down to beat Manchester United 4-2, with Mohamed Salah, Roberto Firmino and Diogo Jota on target while Bruno Fernandes and Marcus Rashford scored for the hosts. Ahead of the latest meeting between the two sides, The Hard Tackle takes a closer look at the encounter.

Full of praise for our Brazilian midfielder 👏

Ole Gunnar Solskjaer has a couple of fresh injury concerns hampering his preparations ahead of the visit of Liverpool. On Sunday, the Manchester United manager could be bereft of the services of as many as five first-team players.

Having said that, only one player is certain to miss out for Manchester United, with Raphael Varane still recuperating from a groin injury. However, Solskjaer is sweating over the fitness of Bruno Fernandes (knock) and Marcus Rashford (dead leg), after the duo sustained their issues earlier this week against Atalanta.

In addition, Fred is also recovering from a knock while Anthony Martial could be short of match fitness despite resuming training this week. The big question marks, though, will surround Bruno Fernandes and Rashford, although the duo are likely to be fit enough to be involved, which will be crucial considering their impact against Atalanta.

However, Rashford should be preserved as an impact substitute, with Paul Pogba starting on the left side of the Manchester United attack while Bruno Fernandes will reprise his usual no. 10 role. On the right flank, Mason Greenwood is a certainty and will carry a threat with his directness, along with Rashford. And leading the line for Manchester United against Liverpool will be Cristiano Ronaldo.

Fred, like Bruno Fernandes and Rashford, should be fit enough to play against Liverpool and should start in midfield, with Scott McTominay expected to be his partner in the double pivot. Defence will hold the key for Manchester United, with Aaron Wan-Bissaka, Victor Lindelof, Harry Maguire and Luke Shaw picking themselves again, and as will David de Gea in goal. 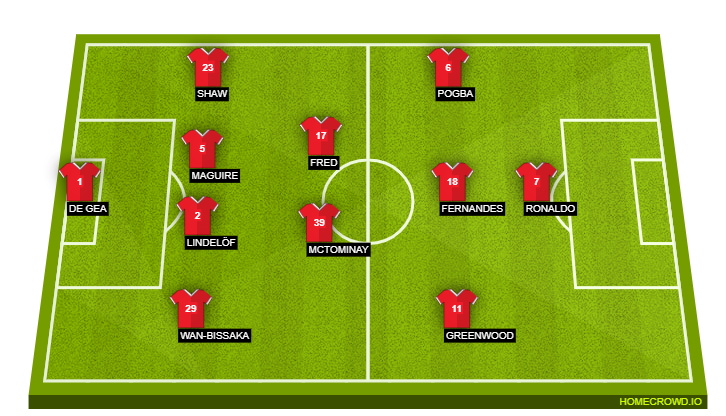 Unlike his counterpart in the Manchester United dugout, Jurgen Klopp has been handed a boost on the team news front ahead of the trip to Old Trafford. On Sunday, the Liverpool manager will only have to make do without two first-team players.

Harvey Elliott remains a long-term absentee due to an ankle injury, with the only other player missing out being Thiago Alcantara. The Spanish international has taken big steps towards making his return from a calf injury, but the Manchester United game has come too soon for him. However, that is not something that can be said about Curtis Jones.

The English under-21 international has resumed full training after completely recovering from a groin injury and will be available to take on Manchester United. However, Jones is likely to be on the bench on Sunday with James Milner getting the nod due to his big-match pedigree. The veteran midfielder did show signs of fatigue against Atletico Madrid but should still be a part of the starting lineup.

However, the same cannot be said of Naby Keita, who will make way for Fabinho. The Brazilian international will be in-charge of stifling Bruno Fernandes while also setting a quick tempo to the game. Captain Jordan Henderson will be the third man in the middle of the park for Liverpool, looking to put in the hard yards on and off the ball.

As for the attacking unit, Diogo Jota will have to suffice with a place on the bench again, as there is no looking past Mohamed Salah, Sadio Mane and Roberto Firmino at the moment. The defenders struggled against Atletico Madrid, but will hope to ensure a quieter outing for Alisson Becker this time around. 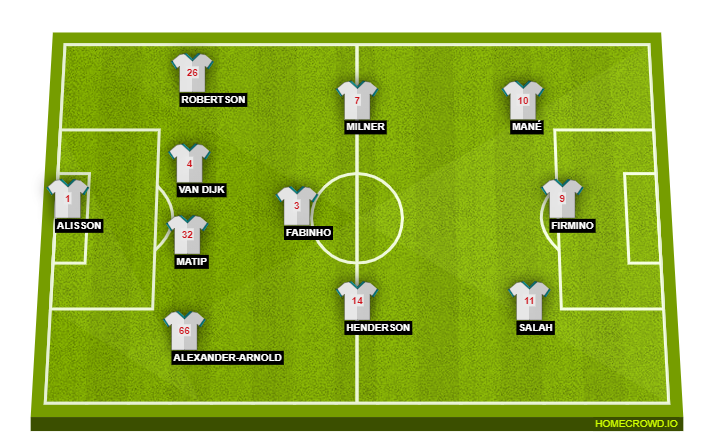 Who else but Salah? There is hardly any player playing at the level of the Liverpool talisman at the moment, let alone better. And at a time when there is a lot of noise and speculation surrounding his future at the Merseyside club, the Egyptian wizard is letting his game do the talking for him, though he has confessed that he would love to stay put at Anfield.

Back to matters on the pitch, and Salah will once again hold the key for Liverpool with his mazy runs and silken touches. With Harry Maguire and Luke Shaw not really looking all that sharp, Salah could have fun on Sunday at Manchester United’s expense, continuing his brilliant run of form.

Seldom do games between Manchester United and Liverpool deliver a goal-fest and this should not be any different. The hosts will desperate to end their winless run in the Premier League and could shut up shop, looking to pounce on the counter, which could play into their hands initially.

However, Mohamed Salah is in irresistible form at the moment, maneuvering space out of nowhere at times. In addition, Manchester United’s home form does not inspire much confidence, having taken just eight points from their last seven league games at Old Trafford.

On the other hand, Liverpool are unbeaten in 18 Premier League games, the longest current streak of any team in England’s top four divisions, and that run should continue on Sunday, with a Salah-inspired 2-1 win over Manchester United, in a result that could add some pressure on Ole Gunnar Solskjaer. A crucial result for Liverpool following Chelsea’s big win over Norwich City on Saturday.