A place in the UEFA Nations League final will be up for grabs when Belgium take on France at the Allianz Stadium on Thursday.

The second edition of the UEFA Nations League is reaching its climactic end, with the final classification of the top four teams set to be confirmed over the course of the week. Italy will lock horns with Spain in the first semi-final on Wednesday while on Thursday, Belgium will face France in a rematch of the FIFA World Cup 2018 semi-final.

Belgium’s golden generation is slowly reaching the end of the line and there is a sneaking feeling that a trophy might elude them all by the time they all call it a day in international football. Indeed, the Red Devils have flattered to deceive at both the 2018 World Cup and UEFA Euro 2020 despite being one of the favourites to win the two tournaments.

However, the Nations League represents the chance for Belgium to break their duck, having largely coasted through their group, which also consisted of hard-hitters like England and Denmark. France, on the other hand, were up against Croatia, Sweden and defending champions Portugal and largely came through unscathed, dropping points in just one of their six games, that being a 0-0 draw with A Selecao.

Les Bleus, though, have not had a 2021 to remember so far, with things unravelling in the national setup following their ouster from UEFA Euro 2020 at the hands of Switzerland. France have indeed struggled to get a win under their belt, with the success against Finland being their first outright win in six games.

The match-up on Thursday will be the first clash featuring Belgium and France since Didier Deschamps & co. won the FIFA World Cup 2018 semi-final. Ahead of the latest meeting between the two sides, The Hard Tackle takes a closer look at the UEFA Nations League encounter.

📝 Here are the Devils for the Final 4️⃣. 🇧🇪 #DEVILTIME pic.twitter.com/1gXcD9ribn

Roberto Martinez has made quite a few changes to the last squad he picked last month. However, the Belgium head coach has not omitted any major name from the latest group he has selected, with fringe players like Christian Benteke, Dennis Praet while Dries Mertens has not been picked by the Belgium boss.

As ever, Belgium will line up in their usual 3-4-2-1 formation, with Thibaut Courtois taking his place in goal. In front of him, the three-man central defensive unit ought to be occupied by Toby Alderweireld, Dedryck Boyata and Jan Vertonghem occupying their respective positions.

In the middle of the park, the onus will be on Axel Witsel and Youri Tielemans to not just disrupt the forward moves for France while also initiating Belgium’s moves. Out wide, Timothy Castagne and Yannick Carrasco will be the two wing-backs, with the duo in-charge of providing width higher up the pitch.

Considering the magnitude of the fixture, Martinez is likely to take a risk with Eden Hazard, who will be a key figure for Belgium along with attacking partners Kevin De Bruyne and Romelu Lukaku, with the latter, in particular, posing a great deal of threat to the France goal. 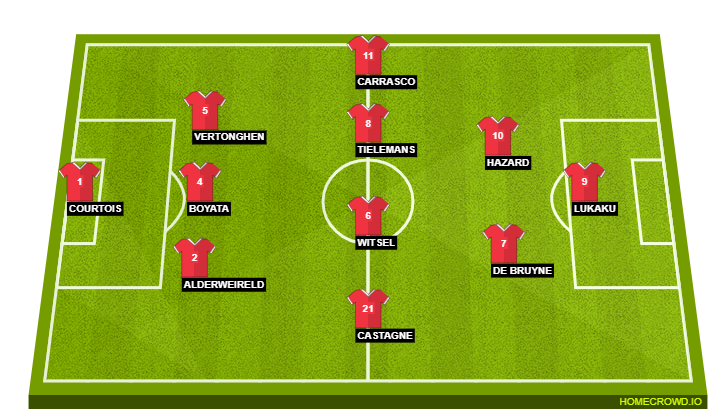 Like his counterpart in the Belgium dugout, Didier Deschamps has made a few alterations to the squad he had picked for the first international break of the season. This time around, the likes of Clement Lenglet, Thomas Lemar and Olivier Giroud all missed the cut.

In addition, the France head coach is also having to make do without N’Golo Kante and Kingsley Coman, both of who are unavailable due to illness or fitness issues. In their stead, a number of inexperienced players are a part of the final group, although Deschamps has stressed that the nine most inexperienced players will not start against Belgium.

Here's our 2⃣3⃣-man squad for the upcoming #NationsLeague Final Four!

Hugo Lloris will take his customary place in goal for France, who could line up in a 4-2-3-1 formation despite the success of the 3-4-1-2 last time out. Raphael Varane and Presnel Kimpembe will form the central defensive partnership while Benjamin Pavard and Lucas Hernandez will be the two full-backs.

Up ahead in midfield, Paul Pogba will be stationed in the double pivot instead of taking up a role on the left wing as he does for Manchester United. Giving him company in the middle of the park will be Adrien Rabiot.

The shift in formation will also mean that Kylian Mbappe will be moved out wide onto the right wing after being used centrally last time out. Antoin Griezmann will reprise his usual no. 10 role while Karim Benzema will lead the line for France against Belgium. The final spot in the side will go to Anthony Martial, who is coming off a memorable performance on the weekend against Everton. 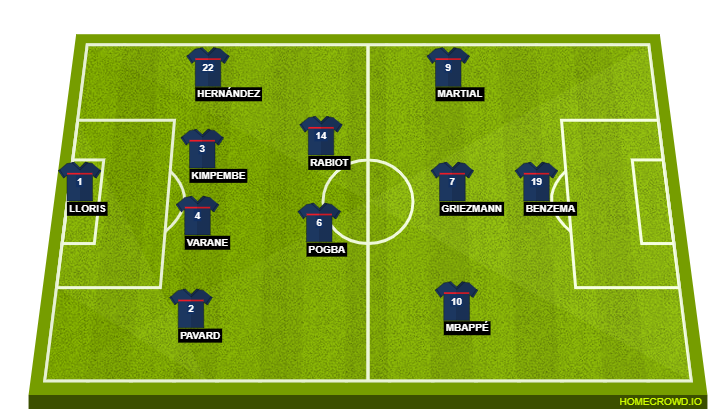 If there is one player who is levels above just about everyone else in Europe at the moment, it is Karim Benzema. The Real Madrid talisman has been directly involved in 16 goals, scoring nine times while assisting seven other strikes. With no attacker involved nearly as many times, it goes without saying that Benzema now needs to translate those exploits onto the international level.

France have been guilty of being quite profligate in recent times, and they have been lacking that ruthlessness in the final third. In order to overcome that, there might not be any better player for them than Benzema, who just cannot stop scoring or assisting goals at the moment. Will he deliver the goods for France as well?

France had been victorious the last time they faced Belgium, but a lot seems to have changed since 2018. No longer are Les Bleus an imperious team that can swat away any and every opposition. And while Belgium do tend to falter at crucial junctures of the big tournaments, they do appear to be carrying better form as a unit.

With that in mind, it appears as if the Red Devils could see the scales tipping in their favour as the game progresses, with France perhaps being unable to get anything out of this one. The Hard Tackle, therefore, predicts a 2-0 win for Roberto Martinez & co. to book a place in the UEFA Nations League final.