West Ham United will hope to extend their winning run going into the international break when they face Brentford at the London Stadium on Sunday.

The second international break is nearly upon us, with just one day of club football remaining before the players head off to their national sides. In the Premier League, four games will be on show, and West Ham United will be aiming to make it four wins in a row when they play hosts to Brentford at the London Stadium on Sunday.

West Ham United have show in the early stages of the 2021/22 season that their performances last term were not a flash in the pan. The Hammers are once again among the better performers in the Premier League, losing just one of their six games so far while also adjusting to the gruelling run that is borne out of participation in the UEFA Europa League.

Brentford, like West Ham, have been beaten only on one occasion in the Premier League, making an impression with their tenacity all across the pitch. This was best evident last weekend, when they twice came from a goal down to hold Liverpool to a 3-3 draw. As a result, the Bees are flying high at the moment, camping themselves in the top half of the table with nine points so far.

West Ham were 4-0 winners the last time they locked horns with Brentford, way back in 1993. Ahead of the latest meeting between the two sides, The Hard Tackle takes a closer look at the maiden Premier League encounter between them.

📋 TEAM NEWS@RyanFredericks_: "I'm not sure if he'll be available for Sunday."@Coufi5: "He has a chance for Sunday. They’re both not bad, so we’re not thinking that they’re too far away."#WHUBRE

David Moyes has one major injury concern hampering his preparations ahead of the visit of Brentford. On Saturday, the West Ham United manager could be bereft of the services of as many as two first-team players.

The major issue pertains to Vladimir Coufal, with Moyes sweating over the fitness of the Czech full-back. Judging by Moyes’ comments in his pre-match press conference, it looks like Coufal could be in line to make a start, shrugging off the minor calf injury. Ryan Fredericks, though, might see the game coming too soon for him to overcome his groin complaint.

However, Coufal’s potential availability means Fredericks is unlikely to be missed much, with the 29-year-old set to start as the right-back. On the left flank, there is no looking past Aaron Cresswell while Kurt Zouma and Angelo Ogbonna ought to pair up at the heart of the West Ham defence. In goal, the in-form Lukasz Fabianski is an automatic pick.

Up ahead in midfield, Declan Rice will aim to continue right from where he left off against Rapid Wien, having looked in imperious touch on Thursday in the UEFA Europa League tie. The English international will have partner-in-crime Tomas Soucek in company in the double pivot, with the duo looking to provide a solid base in the middle of the park while also recycling possession smartly.

As for the attacking unit, new boy Nikola Vlasic could miss out, with Said Benrahma set to reprise the no. 10 role. The former Brentford playmaker will look to construct a fluid partnership with Pablo Fornals and Jarrod Bowen once again while Michail Antonio will lead the line for West Ham on Sunday. 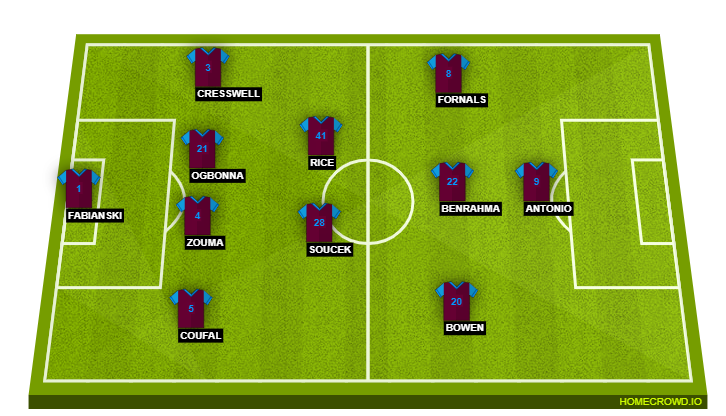 Like his counterpart in the West Ham United dugout, Thomas Frank had been sweating over the fitness of a key player ahead of the short trip to the London Stadium. The Brentford boss, though, will only have to make do without a couple of long-term absentees.

The good news is that Ethan Pinnock ought to be fit enough to start after being taken off in the first half shortly after scoring in the 3-3 draw with Liverpool. The 28-year-old will be a part of the three-man central defensive unit alongside Pontus Jansson and Kristoffer Ajer, with David Raya stationed in goal once again.

Therefore, the only two players missing out for Brentford are Mads Sorensen (knee) and Joshua Dasilva (hip). Coming back to the team selection and Sergi Canos and Rico Henry will once again be the two wing-backs, who will provide a marauding presence from time to time but also look to rob the West Ham wide men off space.

The three central midfielders, likely to be Christian Norgaard, Frank Onyeka and Vitaly Janelt, will personify the tenacity and industry that have become second nature as characteristics for Brentford under Thomas Frank. The trio will aim to contain Said Benrahma while also stifling the ghosting runs of Pablo Fornals.

Finally, the strike partnership will once again be formed by Bryan Mbeumo and Ivan Toney. Frank heaped praise on Mbeumo during his pre-match press conference, and the 22-year-old French attacker will hold the key for the visitors, as he will need to stretch the West Ham defence in the critical forward bursts. 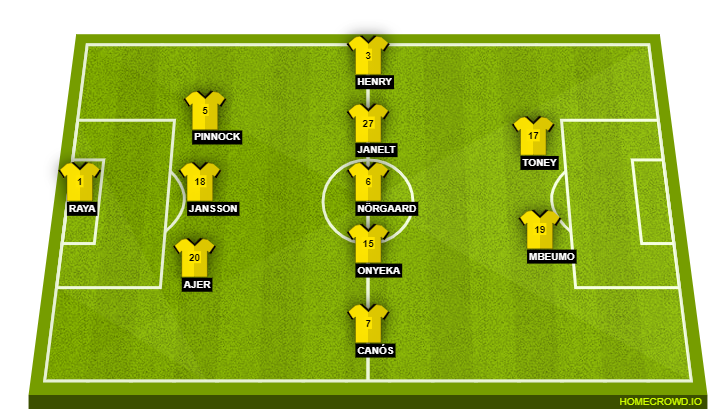 The spotlight will, as always, be firmly on Michail Antonio and Said Benrahma, as well as Brentford frontman Ivan Toney. However, the game is likely to be another scrappy affair involving the Bees, which essentially puts the onus on the defenders to come up trumps in the clutch moments. This is where Kurt Zouma comes into the picture.

The French defender is proving to be a fine addition to the West Ham United defensive setup, and has helped in tightening the screws early in his stint so far. With Toney and Bryan Mbeumo experts at stretching the opposition defence, it will be up to Zouma to ensure the backline remains organised. One of the trickier outings for the former Chelsea defender

This is another one of those games involving Brentford that will leave the onlookers on the edge of their seats. To begin with, the match ought to be an end-to-end affair, with the two goalkeepers being kept fairly busy. The deadlock could well be broken as half-time approaches, with Brentford grabbing a shock lead, possibly through Bryan Mbeumo.

However, West Ham should make another one of their newly trademarked comebacks post the interval, with Michail Antonio and Said Benrahma inspiring the come-from-behind win. The Hard Tackle, therefore, predicts a 2-1 win for David Moyes & co. in a result that could help the Hammers climb up the table.