Leeds United and West Ham United will both be hoping to build on their respective midweek cup wins when they face off at Elland Road on Saturday.

The games are coming thick and fast across Europe and in the Premier League, we are already up to Gameweek 6 of the 2021/22 season. One of the more eye-catching fixtures of the weekend will be played at Elland Road, where Leeds United will be hoping to kick-start their campaign when they play hosts to West Ham United on Saturday afternoon.

Leeds United were quite the maverick team in the 2020/21 season, showcasing attacking brilliance while also being vulnerable at the back. The same characteristics have resurfaced this term, though their front-men have not been as prolific. All of that has effectively meant that the Whites are still in search of their first win of their Premier League campaign, and sit 17th in the standings.

West Ham United, on the other hand, have continued pretty much from where they left off last season, showing that 2020/21 was no fluke by any means. The Hammers have lost just one game so far this season, which was their 2-1 defeat to Manchester United last weekend. The Londoners, though, got a measure of revenge on the Red Devils, beating them 1-0 in the EFL Cup this week.

The corresponding fixture last season saw West Ham United come from a goal down to beat Leeds United 2-1, with Tomas Soucek and Angelo Ogbonna on target, while Mateusz Klich scored for the hosts. Ahead of the latest meeting between the two sides, The Hard Tackle takes a closer look at the encounter.

🎙️ "Llorente, Koch and Bamford won't participate. The rest I can't tell you if they will be available or not." pic.twitter.com/Qt8xn6iQHd

Marcelo Bielsa has a raft of roster issues hampering his preparations ahead of the visit of West Ham United. On Saturday, the Leeds United manager could be bereft of the services of as many as seven first-team players.

The likes of Diego Llorente (knock), Robin Koch (pelvis) and Patrick Bamford (ankle) are certainly unavailable, as is Pascal Struijk, as he serves the last of his three-match ban. Meanwhile, Bielsa is also sweating over the fitness of Luke Ayling (knee) and Raphinha (hip), although the duo should be fit enough to start.

The only other fitness concern is that of Jack Harrison, whose self-isolation period has ended. However, Bielsa’s comments during his pre-match press conference suggest the winger is unlikely to start, if feature at all. In Harrison’s continued absence, Daniel James is a certainty on the left flank, with Raphinha starting on the right wing.

Bamford’s absence would prompt Bielsa to field Rodrigo Moreno as the central striker, with Tyler Roberts being one of the two central attacking midfielders along with Mateusz Klich. The duo will have the responsibility of pressing high up the pitch while also looking to link up smartly with the other three attackers.

Kalvin Phillips will be stationed at the base of the midfield, although he could be an option to start at the heart of the Leeds defence if Ayling is not fit enough to start. Speaking of central defence, Liam Cooper picks himself, with Junior Firpo and Stuart Dallas being the two wide men. In goal, there is no looking past Illan Meslier. 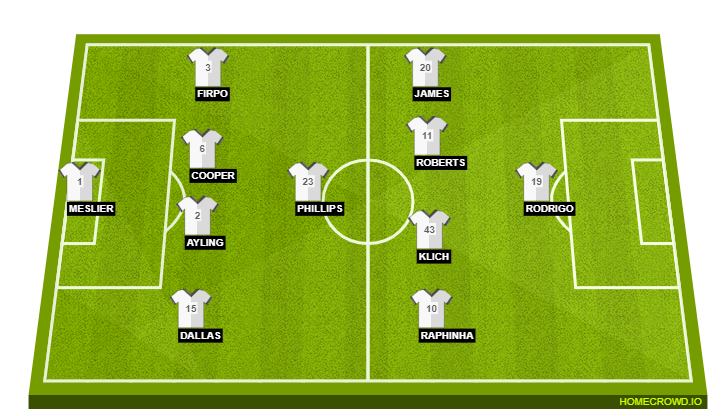 Unlike his counterpart in the Leeds United dugout, David Moyes barely has any injury woes to deal with ahead of the trip to Elland Road. On Saturday, the West Ham United manager will only have to make do without one first-team player, with Ryan Fredericks recovering from a groin injury.

The absence of Fredericks, though, does not hurt one bit, with Vladimir Coufal the first-choice right-back. On the opposite flank, Aaron Cresswell picks himself while Kurt Zouma and Angelo Ogbonna will pair up at the heart of the West Ham defence.

Zouma was brilliant against Manchester United last weekend, and as was Lukasz Fabianski in goal. And the duo will once again hold the key for West Ham against a tricky Leeds attack. Up ahead in midfield, Declan Rice and Tomas Soucek will hope to stifle Leeds during their build-up play while also initiating attacking moves of their own.

Finally, in the attacking department, the good news comes in the form of Michail Antonio’s availability after the star striker missed out due to a suspension last weekend against Manchester United.

Antonio will lead the line for West Ham against Leeds, with creative support coming from Jarrod Bowen, Said Benrahma and Pablo Fornals, all three of whom will also look to take on the Leeds defence inside the box. Nikola Vlasic will be an option off the bench for the visitors. 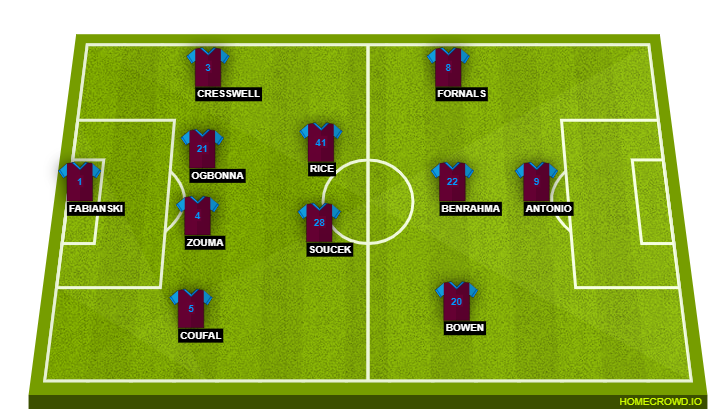 In a game that boasts a number of brilliant players, quite a few players become contenders for such a section. However, we are going ahead with Rodrigo Moreno, who will be playing his most crucial game to date since joining Leeds United, as it offers him the chance to play in his preferred central striker berth.

With Patrick Bamford unavailable, the onus will also be on Rodrigo to produce the goods in the final third with solid link-up play and hold-up play, in addition to offering his goal threat. Will the Spaniard come to the fore against West Ham, or will the Leeds supporters dearly miss Bamford?

With several key players potentially being unavailable, there is a chance that Marcelo Bielsa will set his team up to absorb pressure before initiating deadly counter-attacking moves. However, with their first win still being elusive, one can expect Bielsa to set his team up to attack once again.

This could play into West Ham’s hands, although they could well concede a cheap goal through Raphinha or Daniel James. However, Michail Antonio should be back in his elements on Saturday, paving the way for a 3-1 win for David Moyes & co.