A place in the Carabao Cup fourth round will be up for grabs when Norwich City welcome Liverpool to Carrow Road on Tuesday.

The games are starting to come thick and fast for clubs across Europe and this midweek, the top teams from England will be participating in the Carabao Cup for the first time this season. Liverpool are one such club, as they take on Norwich City at Carrow Road in a third-round tie.

Norwich City reached the third round of the 2021/22 Carabao Cup after beating Bournemouth 6-0 in the previous stage. Other than the success in the cup competition, though, it has been all doom and gloom for the Canaries, who are rock-bottom in the Premier League after suffering five defeats in as many outings so far.

Liverpool, on the other hand, have been the polar opposites of their hosts on Tuesday. The Reds, in fact, kicked off their 2021/22 campaign with a straightforward 3-0 defeat of Norwich, and have since failed to win just one of their five subsequent games. Four of those fixtures have come in the Premier League, with Jurgen Klopp & co. essentially joint-top in the division thanks to an identical record to Chelsea.

As iterated earlier, Norwich and Liverpool have locked horns once already this season, with the Reds cruising to a 3-0 win last month. Ahead of the latest meeting between the two sides, The Hard Tackle takes a closer look at the encounter.

🗣 DF: Zimmermann will miss this game due to his ankle problem. Placheta is still on the way to recovery from long-term COVID symptoms.

Cantwell will miss the game due to personal reasons. pic.twitter.com/hiO0NxpakQ

Daniel Farke has nearly half a dozen players being potentially unavailable due to fitness issues and other problems. On Tuesday, the Norwich City manager will have to make do without Todd Cantwell, Przemyslaw Placheta, Christoph Zimmermann and Sam Byram.

However, there is some good news on offer as well, with Bali Mumba and Jakob Sorensen now being fit enough to be involved against Liverpool. In fact, Mumba is likely to be a part of the starting lineup, taking up the right-back slot, with Dimitrios Giannoulis starting on the left flank.

At the heart of the Norwich defence, Ben Gibson is likely to pair up with former Liverpool defender Ozan Kabak. Up ahead in midfield, the onus will be on Billy Gilmour to keep things tight in the middle of the park, with the Scot receiving defensive support from Pierre Lees Melou and Lukas Rupp.

Finally, in attack, Milot Rashica might start on the right-wing in the absence of Cantwell, but Josh Sargent will get the chance to lead the line for Norwich against Liverpool. The final spot in the starting lineup will likely go to Christos Tzolis, with Teemu Pukki being a backup attacking option. 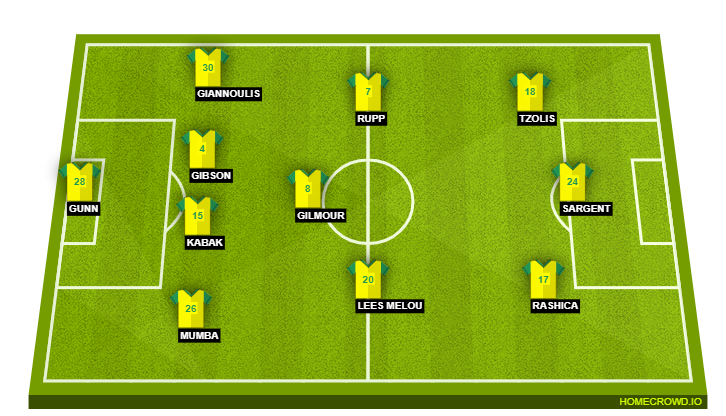 Like his counterpart in the Norwich City dugout, Jurgen Klopp has a number of roster issues hampering his preparations ahead of the trip to Carrow Road. On Tuesday, the Liverpool boss will have to make do without as many as five first-team players.

The latest absentee for the Reds is Thiago Alcantara, who is unavailable after sustaining a calf injury last time against Crystal Palace. Harvey Elliott remains a long-term absentee while Trent Alexander-Arnold once again misses out due to the illness that sidelined him on the weekend.

Roberto Firmino and Neco Williams are inching closer to their respective returns from a hamstring and ankle injury, respectively, but the game against Norwich has come too soon for the pair. In the absence of Williams and Alexander-Arnold, Joe Gomez will likely start as the right-back for Liverpool, with James Milner moving into a midfield role.

At the heart of the Liverpool defence, Nathaniel Phillips ought to pair up with Joel Matip, with Andrew Robertson coming in for Kostas Tsimikas on the left flank. Meanwhile, in goal, Caoimhin Kelleher gets a chance to impress in what is a rare start for him.

Up ahead in midfield, Milner should sit at the base of the three-man unit, with defensive support coming from Curtis Jones and Alex Oxlade-Chamberlain, who will also look to provide the forward thrust from the middle. Finally, in attack, there is a chance that Kaide Gordon gets his full debut, with Divock Origi and Takumi Minamino getting a rare start in the final third. 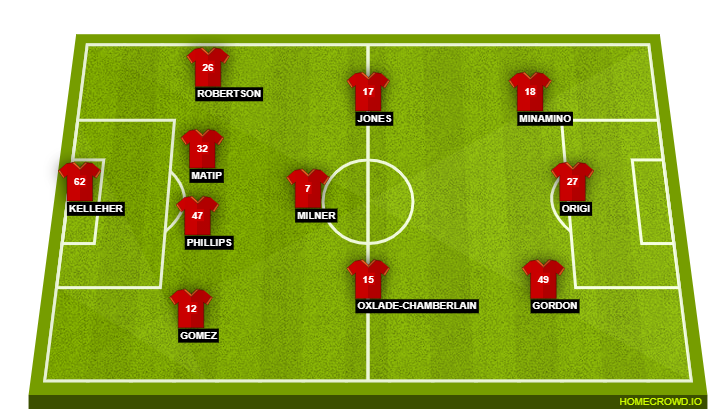 Things have gone horribly pear-shaped for Origi ever since his stunning 2018/19 campaign. While he did still feature from time to time in Liverpool’s memorable Premier League winning season, the Belgian forward has slowly become a peripheral figure in the past year or so.

The arrival and the subsequent exploits of Diogo Jota have hardly helped matters for Origi, whose blow-hot-blow-cold displays have done little to aid his cause either. The game on Tuesday, though, offers him a rare chance to impress and it will be up to him to vindicate some of his remaining supporters by giving Jurgen Klopp some food for thought.

This is a rare game against one of the powerhouses of the Premier League wherein Norwich City might have a slim chance of producing a shock result. After all, Jurgen Klopp will field a largely second-string side, as he always does in a cup fixture, meaning the defence would be there for the taking, as AC Milan found out last week.

Having said that, Norwich’s own frailties at the back are well-documented, with Liverpool likely to have more than enough firepower to score as many as three times. In the end, the likes of Divock Origi, James Milner and Alex Oxlade-Chamberlain could well be on target for Liverpool, who ought to grab a 3-1 win to reach the Carabao Cup fourth round.