Aston Villa will be aiming to hand Everton their first loss of the 2021/22 season when the two sides meet at Villa Park on Saturday.

Gameweek 5 of the 2021/22 Premier League season continues on Saturday, with the proceedings on the day coming to a close in Birmingham. It is here where Everton will be hoping to continue their unbeaten start to the campaign, when they take on Aston Villa at Villa Park.

Aston Villa had a lot of expectations built around them at the onset of the 2021/22 season, having brought in several top class players, who, on paper, seemed to be elevating the levels of the squad despite the departure of Jack Grealish. However, that has not proven to be the case, with the Villans losing two of their four league games so far, including a 3-0 defeat to Chelsea last weekend.

Everton, on the other hand, have been nothing short of impressive under the tutelage of Rafael Benitez so far. Five games into the season, the Toffees have failed to win just one game so far, which was a 2-2 draw with Leeds United. Last time out, Everton came from a goal down to beat Burnley 3-1 to climb into the top four.

The corresponding fixture last season was a drab affair which ended in a goalless draw between Aston Villa and Everton. Ahead of the latest meeting between the two sides, The Hard Tackle takes a closer look at the encounter.

Smith on Emi Martínez and Emi Buendía: “We are expecting them to join us tomorrow morning and I will assess it then and decide whether they will be involved or not.

Dean Smith has a number of pressing fitness issues hampering his preparations ahead of the visit of Everton. On Saturday, the Aston Villa manager could be bereft of the services of five first-team players.

The good news comes in the form of Emiliano Martinez’s return following the end of his quarantine period. However, the likes of Carney Chukwuemeka (groin), Jaden Philogene-Bidace (ankle), Keinan Davis (knee) and Trezeguet (knee) remain on the sidelines, with Emiliano Buendia unlikely to be fit enough to start.

As iterated, Martinez will take his place in goal on Saturday, with Aston Villa lining up in a 4-3-3 formation against Everton. Keeping that in mind, Ezri Konsa and Tyrone Mings will form the central defensive partnership, with Matty Cash and Matt Targett being the two full-backs.

Up ahead in midfield, the onus will be on Douglas Luiz to keep a check on the in-form Demarai Gray, with John McGinn and Jacob Ramsey being the workhorses in the middle of the park. Finally, in attack, Leon Bailey and Bertrand Traore ought to be the two wide men, with Danny Ings leading the line for Aston Villa against Everton. 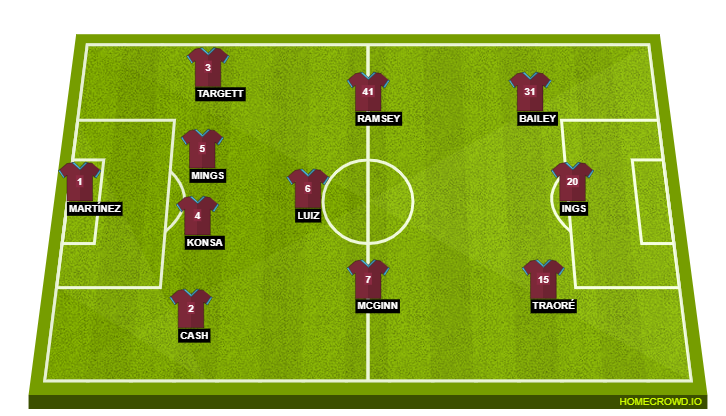 Unlike his counterpart in the Aston Villa dugout, Rafael Benitez has just one major absentee to deal with ahead of the trip to Villa Park. On Saturday, the Everton manager will have to make do without three first-team players.

Dominic Calvert-Lewin is the aforementioned major absentee for Everton, with the English striker likely to miss a couple of weeks of action. Apart from Calvert-Lewin, Fabian Delph remains on the sidelines due to a shoulder injury, while James Rodriguez is unlikely to feature amid the uncertainty surrounding him.

Jordan Pickford is the automatic pick between the sticks for Everton, who will line up in a 4-3-2-1 formation against Aston Villa. The central defensive positions are proving to be the major iffy choice for Benitez, who will likely give the nod to Michael Keane and Yerry Mina at the heart of the Everton defence. Seamus Coleman and Lucas Digne will be the two full-backs.

The absence of Calvert-Lewin has prompted a slight tweak in system and the three central midfielders – Allan, Abdoulaye Doucoure and Andre Gomes – will have the onus on them to keep things tight in the middle of the park. Doucoure, though, will also embark on ghosting runs into the Aston Villa box, making him a potential goal threat.

Richarlison will lead the line for Everton against Aston Villa in the absence of Calvert-Lewin, with Andros Townsend and Demarai Gray playing off of him. The two attackers will take up central positions, meaning Coleman and Digne will have the responsibility of providing width in the final third. 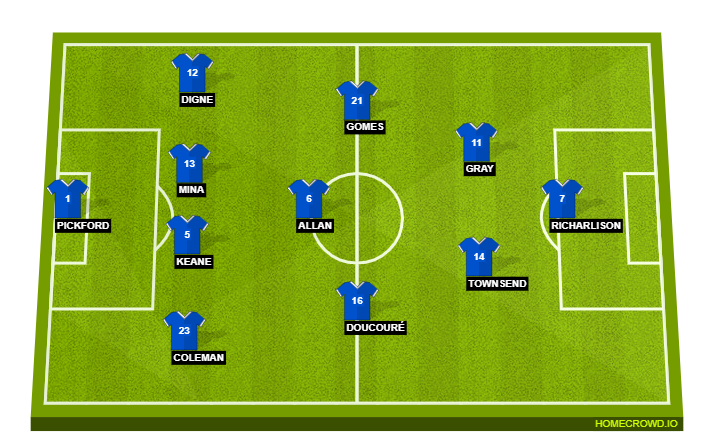 It has been touted to be a game-changing signing for Aston Villa. Following his exploits over the last few years at Southampton, Danny Ings arrived at Villa Park with a lot of expectations around him. However, the English international is yet to hit the ground running at the club.

Things do not get any easier against an Everton side that will be set up to frustrate Ings even more. Having said that, the Toffees have appeared to be rather vulnerable at the back, meaning the 29-year-old will fancy his chances on Saturday. However, it remains to be seen if Ings can finally show just why Aston Villa paid the big bucks to land him.

This is one of those games that can be too close to call. Aston Villa have not really managed to make as big a mark as was expected of them following their spending spree in the summer. Everton, on the other hand, have proven to be quite resilient under Rafael Benitez and will hope to continue their fine run of form.

The absence of Dominic Calvert-Lewin certainly hurts Everton, but with Demarai Gray being in as fine a form as he is in, the Toffees appear to be the slight favourites. With that in mind, The Hard Tackle predicts an odd goal win for Everton, wherein Aston Villa will make it incredibly difficult for them to grab all three points.