Liverpool will be eager to begin their UEFA Champions League campaign on a strong note when they welcome AC Milan to Anfield on Wednesday.

The curtains will fall on Matchday 1 of the group stage of the 2021/22 UEFA Champions League on Wednesday, with teams from Groups A-D taking the field. And Liverpool will start their campaign in Europe on the day as well, as they play hosts to AC Milan at Anfield.

Liverpool have been drawn in a tricky group in the UEFA Champions League, comprising of Milan, Atletico Madrid and FC Porto. Porto and Atletico Madrid will be taking on each other on the same day, with Liverpool’s campaign kicking off versus the Rossoneri, in what is already a must-win game for the Reds.

Jurgen Klopp’s men have been in fine touch early in the 2021/22 season, having won three of their four games so far. The latest of these wins came this past weekend against Leeds United, as they cruised to a 3-0 victory, with both Mohamed Salah and Sadio Mane on target.

AC Milan, on the other hand, have looked as good, if not better than Liverpool, having won each of their first three Serie A games so far. The Rossoneri began their 2021/22 campaign with a 1-0 win over Sampdoria before beating Cagliari 4-1. However, it is the 2-0 win over Lazio that has laid down the market in the league, although UEFA Champions League could well be a different ball game.

Liverpool and AC Milan have played out two famous UEFA Champions League fixtures and those are the only two instances when they have ever clashed, with both sides taking a win apiece. Ahead of the latest meeting between the two sides, The Hard Tackle takes a closer look at the encounter.

🗣️ We’re live with the boss and @AlissonBecker for our first #UCL press conference of the season! 🤩 https://t.co/B1zrnUuRwK

Jurgen Klopp has a fresh injury hampering his preparations ahead of the visit of AC Milan. On Wednesday, the Liverpool manager will likely be bereft of the services of four first-team players, with Harvey Elliott the latest on the sidelines.

The teenage prodigy sustained a big ankle injury against Leeds United this past weekend and is out for the foreseeable future. Another key player missing for Liverpool is Roberto Firmino, who is recovering from a hamstring injury, while Neco Williams (foot) and Takumi Minamino (thigh) are both major doubts.

Klopp is unlikely to make many big chances to the starting lineup against Milan considering how tricky an opponents the visitors are. Alisson Becker will, therefore, keep his place in goal, with the Reds likely to line up in their customary 4-3-3 formation.

At the heart of the Liverpool defence, the formidable partnership of Joel Matip and Virgil van Dijk ought to continue, with the marauding duo of Trent Alexander-Arnold and Andrew Robertson being the two full-backs, who will have a lot riding on them in the final third.

The first and only change to the side will come in midfield, with Jordan Henderson replacing the injured Elliott. Thiago Alcantara and Fabinho will be the two other midfielders, with the latter keeping things tight in the middle of the park while Thiago will be in-charge of distributing the ball efficiently.

Finally, in the attacking unit, there is no looking past Mohamed Salah, Sadio Mane and Diogo Jota retaining their spots upfront, especially in the absence of Firmino. The trio will once again form a fluid attacking partnership, which ought to create at least one goal. 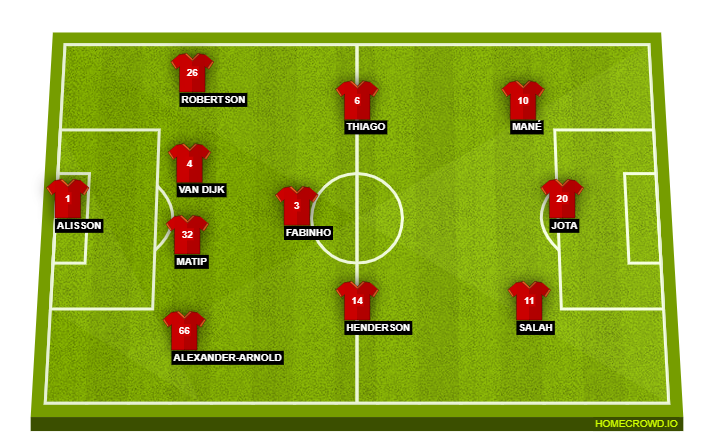 Like his counterpart in the Liverpool dugout, Stefano Pioli has a key player missing owing to an injury. On Wednesday, the AC Milan manager will have to make do without three first-team players.

The major absentee for AC Milan is Zlatan Ibrahimovic, who is unavailable due to an Achilles injury. Apart from Ibrahimovic, Tiemoue Bakayoko (ankle) and Rade Krunich (muscle injury) are on the sidelines as well and only likely to return to action sometime next month.

📋 The squad for our @ChampionsLeague debut

Like Jurgen Klopp, Pioli has his preferred formation which he rarely sways away from. So, Mike Maignan will take his place between the sticks against Liverpool, with AC Milan lining up in their usual 4-2-3-1 formation in front of him.

Alessio Romagnoli impressed last time out against Lazio and might have done enough to keep hold of his spot at the heart of Milan’s defence, with Fikayo Tomori likely to be his partner. Out wide, Davide Calabria and Theo Hernandez pick themselves, with the two full-backs providing a major outlet on the flanks.

Up ahead in midfield, Franck Kessie remains a key player despite his troublesome contract situation. The Ivorian will likely have Sandro Tonali has partner in the double pivot, with the duo providing a tenacious presence in the middle of the park for Milan.

The choice of the central striker will be an interesting one, with Olivier Giroud vying with Ante Rebic to lead the line for Milan against Liverpool. Rebic could get the nod upfront, with Giroud being a game-changing option off the bench. As for the support cast in attack, Brahim Diaz will play off of Rebic, with Rafael Leao and Alessandro Florenzi being the two wide men. 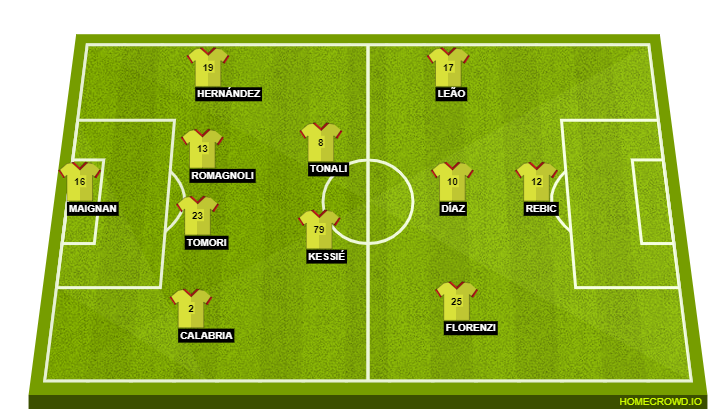 After a difficult first season with Liverpool, Thiago Alcantara appears to be getting back to his very best. In fact, the Spanish international produced one of his best performances yet for the Reds last time out against Leeds United, having dominated the midfield battle with elan.

With Liverpool looking for an added dimension in their gameplay to become a force to be reckoned with, Thiago’s performances will hold the key this season. And against AC Milan, Jurgen Klopp will need Thiago at his very best if Liverpool are to bypass a solid midfield unit of Franck Kessie and Sandro Tonali. A big game beckons Thiago.

This is one of those games that might not necessarily deliver a lot in terms of exciting action higher up the pitch. Liverpool ought to dominate the proceedings for the most part, but might not be able to create too many clear-cut scoring opportunities thanks to a stubborn resistance from AC Milan.

On the opposite end, Virgil van Dijk & co. ought to be fairly comfortable, as the absence of Zlatan Ibrahimovic is likely to make the Rossoneri’s attack blunter. The game, though, should give us a definitive result, with Liverpool likely to score one decisive goal through the brilliant Mohamed Salah. The Hard Tackle predicts a 1-0 win for Liverpool.