West Ham United will hope to extend their unbeaten start to the 2021/22 season when they take on Southampton at St. Mary’s on Saturday.

Club football resumes this weekend following a near two-week long layoff. With it, several clubs are set to begin their grind, as the gruelling European schedule will kick off in the coming week. One team falling this category are West Ham United, who will face Southampton at St. Mary’s on Saturday afternoon before starting their UEFA Europa League campaign on Thursday.

Southampton have shown a lot of resolve after a tough start to the season that saw them go down 3-1 to Everton in their opening fixture. Since then, the Saints have managed to play out a couple of draws, first holding Manchester United to a 1-1 draw before twice coming from a goal down to play a 2-2 stalemate with Newcastle United.

West Ham United, on the other hand, have been the form team in the Premier League in the first three gameweeks, even though they did drop points last time out against Crystal Palace. The Hammers have been rampant at times, as illustrated in their big wins over Newcastle United and Leicester City. An unbeaten start to the season has helped them climb up to second on the table.

The corresponding fixture last season ended in a drab goalless draw, with both sides managing just three shots on target each. Ahead of the latest meeting between the two sides, The Hard Tackle takes a closer look at the encounter.

Ralph Hasenhuttl has a number of roster issues hampering his preparations ahead of the visit of West Ham United. On Saturday, the Southampton manager will be bereft of the services of as many as four first-team players.

Shane Long is currently recovering from COVID-19 and is not available to take on West Ham. In addition, the likes of Stuart Armstrong (calf), Theo Walcott (knock) and William Smallbone (knee) are all on the sidelines and miss out on Saturday.

Alex McCarthy will once again take his place in goal for Southampton, who will line up in the usual 4-2-2-2 formation that Hasenhuttl has preferred for the longest time. The onus will be on the players in the spine to make the difference if the Saints are to take anything from the game.

While McCarthy will likely be a busy man in goal, Jack Stephens and Mohammed Salisu will have a tough task keeping Michail Antonio quiet at the heart of the Southampton defence. Meanwhile, James Ward-Prowse and Oriol Romeu will need to keep things tight in the middle of the park while keeping a check on the ghosting runs of Tomas Soucek.

At the back, Salisu and Stephens will be flanked by Kyle Walker-Peters and the impressive Valentino Livramento, who is proving to be a shrewd addition from Chelsea. As for the attacking unit, the strike partnership of Che Adams and Adam Armstrong is likely to be supplemented by Mohamed Elyonoussi and Moussa Djenepo, who will be two fiery wide men for Southampton. 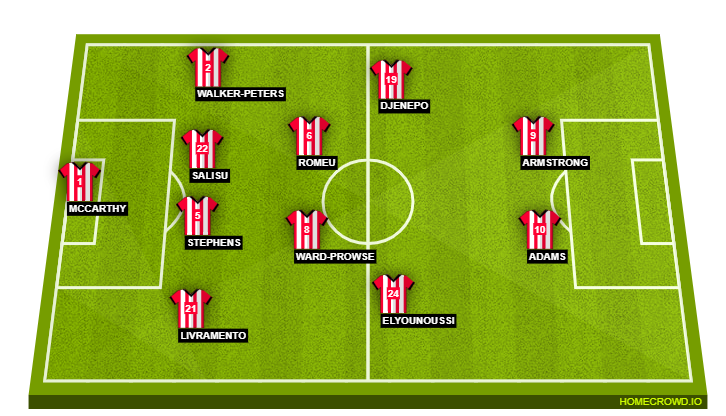 Unlike his counterpart in the Southampton dugout, David Moyes has a full strength squad at his disposal. And the West Ham manager will also be able to call upon three new additions to his squad in the form of Kurt Zouma, Alex Kral and Nikola Vlasic.

In fact, Zouma is likely to be thrown into the deep end straightaway, with the Frenchman, who has arrived from Chelsea, lining up at the heart of the West Ham defence alongside Angelo Ogbonna. Out wide, Vladimir Coufal and Aaron Cresswell will retain their places as the two full-backs, with the duo holding the key on both ends of the pitch.

In goal, Lukasz Fabianski ought to keep hold of his spot, although there have been suggestions that he could start getting phased out this season. Up ahead in midfield, Tomas Soucek and Declan Rice will continue in their formidable partnership in the double pivot, with the former also posing a threat higher up the pitch every now and then.

Finally, attack is the USP for West Ham, and Michail Antonio, who has been named the Premier League Player of the Month for August, will aim to continue his fine run of form. The 30-year-old will be supported by Jarrod Bowen, Pablo Fornals and Said Benrahma, with Vlasic, a deadline day addition for West Ham, being an option off the bench. 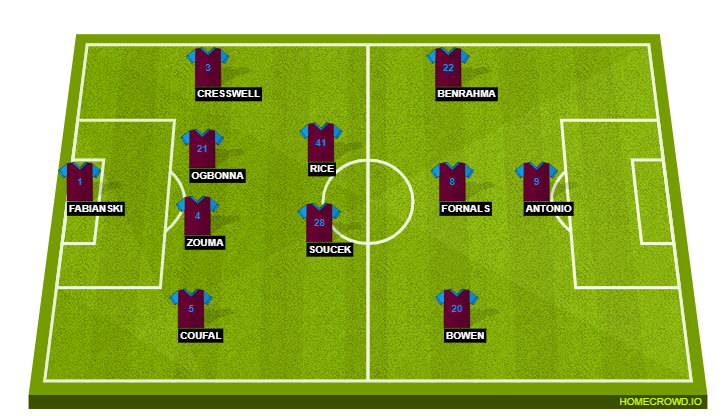 He might not be a part of the starting lineup for West Ham United straightaway, but Vlasic is a player that the Hammers’ faithfuls will keep a keen eye on this Saturday. After all, the Croat has come in as an alternative to Jesse Lingard, following West Ham’s failure to swoop him away from Manchester United.

The 23-year-old has come a long way since struggling to make an impact for Everton and has grown leaps and bounds at CSKA Moscow. Now also a regular for Croatia, Vlasic arrives at West Ham as a genuine asset, potentially, and it will be interesting to see if he can make an impression off the bench on debut.

This is a game that could end up being a tactical battle. Southampton are expected to begin behind the ball, looking to frustrate West Ham United by snuffing out the space in the attacking areas. And in their bid to hit their visitors on the counter, the Saints could even grab a shock lead, possibly through Adam Armstrong.

Kurt Zouma’s arrival, though, should help West Ham shore things up, meaning the Hammers might not be troubled too much even if they concede once. On the opposite end, wave after wave of attacks should do the trick before West Ham eventually run away with the game.

In the end, the game should end in a 3-1 win for the visitors, with Michail Antonio and Zouma being on target and Nikola Vlasic making an impact off the bench. A result that helps West Ham maximise their points ahead of their UEFA Europa League bow this season on Thursday.