Tottenham Hotspur will be eager to continue their perfect start to the season when they take on Crystal Palace at Selhurst Park on Saturday.

The first international break of the season is behind us and that means that frantic action is set to begin in club football. In the Premier League, Gameweek 4 of the 2021/22 campaign begins with a London derby, as Crystal Palace play hosts to Tottenham Hotspur in Saturday’s lunch-time kick-off.

Crystal Palace have been slow off the blocks under the tutelage of Patrick Vieira and are still looking for their first win in what is set to be a transitional season following the end of Roy Hodgson’s tenure. So far, the Eagles have played out a couple of draws after being beaten 3-0 by Chelsea in their season opener.

Tottenham Hotspur, like Crystal Palace, are in a season of transition following the appointment of Nuno Espirito Santo as their new manager. However, unlike their hosts, Spurs have been on a sort of a roll early in the season, having won each of their first three games by a scoreline of 1-0. So while they might not have been menacing in the final third, they have shown a lot of resolve so far.

The corresponding fixture last season saw Crystal Palace come from a goal down to hold Tottenham to a 1-1 draw, as Jeffrey Schlupp scored a late equaliser after Harry Kane had handed Spurs the lead in the first half. Ahead of the latest meeting between the two sides, The Hard Tackle takes a closer look at the encounter.

The international break came at the perfect time for Crystal Palace, and Patrick Vieira now nearly has his entire squad at his disposal. In fact, ahead of the visit of Tottenham, the Eagles’ boss is only bereft of the services of two first-team players, with Eberechi Eze and Nathan Ferguson out with long-term achilles injuries.

The good news comes in the form of Michael Olise’s return to fitness, and the prodigious midfielder is in line for his Crystal Palace debut. In addition, Luka Milivojevic is available again, with the Crystal Palace captain likely to take his place in the three-man midfield unit alongside Conor Gallagher and James McArthur.

Vieira also has two new players at his disposal after signing Odsonne Edouard and Will Hughes, with the duo likely to be introduced off the bench on Saturday. So, that means Christian Benteke will lead the line for Crystal Palace against Tottenham ahead of Edouard, with Wilfried Zaha and Jordan Ayew being the danger men out wide.

At the back, the onus will be on Joachim Andersen and Marc Guehi to remain solid at the heart of the Crystal Palace defence. Guehi has recently justified his decision to join the Eagles and will look to vindicate himself with his performances. Meanwhile, Joel Ward and Tyrick Mitchell will be the two full-backs, who could be pinned back a lot, with Vicente Guaita set to take his place in goal. 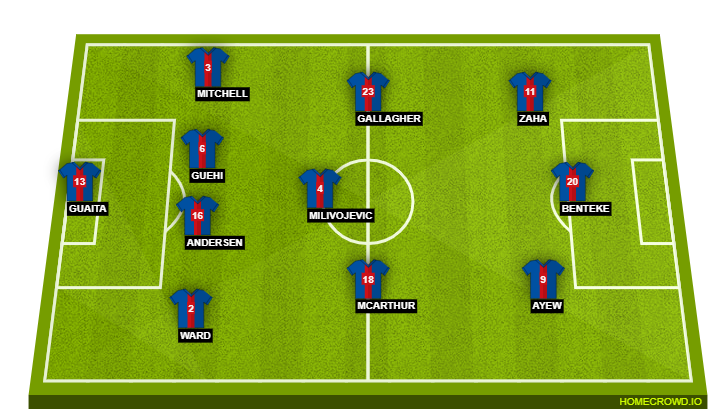 Unlike his counterpart in the Crystal Palace dugout, Nuno Espirito Santo has been hampered by a fair few fitness issues heading into his side’s fixture this weekend. On Saturday, the Tottenham Hotspur manager might have to make do without as many as six first-team players, with three absentees being confirmed.

Cristian Romero and Giovani Lo Celso have landed in hot soup after their decision to go represent Argentina during the international break and are currently self isolating, and so is Davinson Sanchez. Meanwhile, the likes of Son Heung-min (calf), Steven Bergwijn (ankle) and Oliver Skipp (groin) are all struggling with their respective injuries and are major doubts.

The potential absence of Son, in particular, could be a big blow, as he has been by far Spurs’ best player so far. If the South Korean attacker is unable to prove his fitness in time, Bryan Gil could be in line to make his first Premier League start for Tottenham, taking his place on the right wing. On the opposite flank, Lucas Moura is a certainty while Harry Kane will spearhead the attack.

Kane is a pivotal figure for Tottenham, and more so if Son is unavailable. As for the midfield unit, the potential absence of Skipp could hand Harry Winks a chance to prove himself. The Englishman will start alongside Pierre-Emile Hojbjerg and Dele Alli, who has been impressive early in the season.

Nuno should hand Emerson his Tottenham debut following his deadline day move from Barcelona, with Japhet Tanganga moving into the central defensive partnership alongside Eric Dier owing to the absence of Davinson Sanchez. Sergio Reguilon picks himself on the left flank while Hugo Lloris is an automatic pick between the sticks. 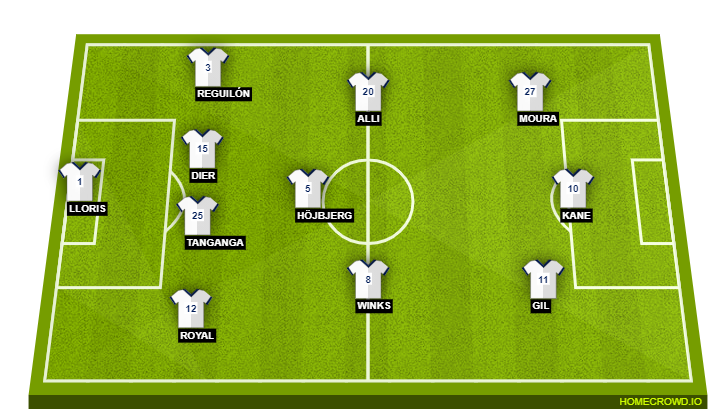 Harry Kane dominated the headlines this summer, as he led England with aplomb all the way to the UEFA Euro 2020 final before being constantly linked with Manchester City for much of the summer transfer window. However, after reaffirming his commitment to Tottenham, Kane now has the onus on him to get his head sorted and deliver the goods for his club.

If Son Heung-min ends up being unable to make the starting lineup, Kane will have even more responsibility in the final third. And with Tottenham not quite showing the required cohesion as of now, the experienced striker will have a lot riding on him with his all round abilities. A big game in the early stages of the season.

This is another Tottenham game that is unlikely to deliver a lot of goals. Crystal Palace are not as solid as they have been in recent seasons, but have shown some much-needed resilience in the last couple of games. Spurs, on the other hand, have not been too threatening in the final third, and that should be the case at Selhurst Park as well.

Tottenham have scored exactly once in each of their last five Premier League games at Selhurst Park, and that record is likely to extend on Saturday. Crystal Palace, though, might be unable to breach a stubborn Spurs backline, meaning it will be another 1-0 win to consolidate their place atop the table for Nuno Espirito Santo & co.