France will be eager to get back to winning ways and consolidate their place atop Group D of the FIFA World Cup 2022 Qualifiers when they face Ukraine.

The international break reaches its midway stage this weekend, as teams compete in the second of their three fixtures. As is the case across the world, FIFA World Cup 2022 Qualifiers will continue in Europe as well, and in Group D, leaders France will travel to Kiev to take on Ukraine at the Olympic Stadium on Saturday.

France, the reigning world champions, are in a bit of a daze after everything that transpired at UEFA Euro 2020, which ended on a whimper while throwing open a whole can of worms. That has had its own trickle-down effect, as Les Bleus played out a 1-1 draw with Bosnia and Herzegovina earlier in the week.

Ukraine, on the other hand, are in a state of transition following the departure of Andriy Shevchenko at the end of Euro 2020. Shevchenko has since been replaced by Oleksandr Petrakov, who is only on interim charge. The 64-year-old’s temporary stint did not get off to the best of starts, as the Blue and Yellow were held to a 2-2 draw by Kazakhstan in their Matchday 4 tie.

The reverse fixture in the FIFA World Cup 2022 Qualifiers, played at Stade de France back in March, ended in a 1-1 draw, with Serhiy Sydorchuk earning Ukraine a point after Antoine Griezmann had handed France the lead. Ahead of the latest meeting between the two sides, The Hard Tackle takes a closer look at the encounter.

Oleksandr Zinchenko misses out for Ukraine due to suspension. (Photo by Marco Bertorello/AFP/Getty Images)

Oleksandr Petrakov has a number of roster issues hampering his preparations ahead of the visit of France. On Saturday, the Ukraine interim boss will be forced into making a few forced chances, especially with experienced midfielder Oleksandr Zinchenko suspended.

In addition, the likes of Heorhiy Buschan, Andriy Lunin and Antoliy Trubin are all unavailable to take on France, meaning Andriy Pyatov will take his place in goal for Ukraine. In front of Pyatov, Ukraine will line up in a 3-4-2-1 formation against France, with the three attackers forming the first line of press.

As for the three-man central defensive partnership, Mykola Matviyenko, Vitaliy Mykolenko and Illya Zabaryni will be the three centre-backs, who will be aiming to keep Karim Benzema quiet. As for the two wing-backs, Oleksandr Karavayev and Eduard Sobol will be in charge of providing the width in the final third while also dropping deep to form a back five during the defensive phases.

Up ahead in midfield, the absence of Zinchenko paves the way for Mykola Shaparenko to start in the double pivot alongside Serhiy Sydorchuk, with the duo largely having the responsibility of cutting the output of the dangerous Antoine Griezmann.

Finally, in attack, Roman Yaremchuk is a certainty to lead the line for Ukraine against France. The 25-year-old will receive creative support from Ruslan Malinovskyi and Andriy Yarmolenko, with the latter also providing a goal threat. 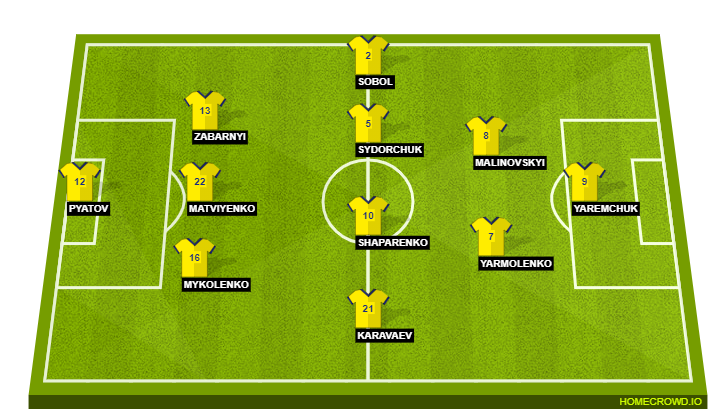 Like his counterpart in the Ukraine dugout, Didier Deschamps will have to make do without one player due to suspension. That player is Jules Kounde, who misses out for the visitors after being sent off for a dangerous challenge on Sead Kolasinac last time out.

In Kounde’s absence, Leo Dubois is almost a certainty to come in and take up the right-back slot. On the opposite flank, Lucas Digne ought to keep hold of his spot, even though he was not quite at his best last time out against Bosnia and Herzegovina, meaning Theo Hernandez misses out again.

At the heart of France’s defence, Raphael Varane ought to pair up with Presnel Kimpembe once again, with Hugo Lloris an automatic pick between the sticks. Up ahead in midfield, Adrien Rabiot is likely to be included as Paul Pogba’s partner in the double pivot, with Thomas Lemar providing additional defensive support.

Lemar, though, will primarily feature from the left wing, especially during the attacking phases. On the right flank, Kingsley Coman is expected to start, with Kylian Mbappe struggling with a calf issue for some time now. Antoine Griezmann and Karim Benzema will take up the other two spots, with the duo holding the key for France against Ukraine. 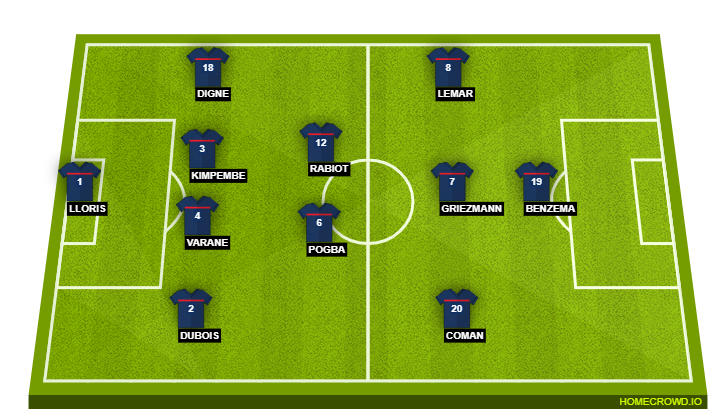 Will Griezmann deliver the goods for France? (Photo by Franck Fife/AFP via Getty Images)

Karim Benzema continues to settle down as a France player since making his big return ahead of UEFA Euro 2020. Kylian Mbappe has been growing in stature for half a decade now. However, no player holds as much importance for France as Antoine Griezmann does.

The 30-year-old might be involved in a murky fiasco at club level, what with joining and then leaving Barcelona within a span of two years. However, for France, Griezmann is nothing short of a colossus. And against Ukraine, Griezmann’s output will hold the key if France are to grab all three points, with the hosts being rather stubborn when they want to be.

Ukraine, especially at home, are quite a tricky proposition for France, who are hardly in a solid run of form at the moment. However, with the hosts being in a state of transition, there has to be a feeling that they are there for the taking, even for a team like France, that has had turbulent times.

Ukraine do not appear to be solid at all at the back, and that is something that Antoine Griezmann and Karim Benzema will likely capitalise on. The former could even score more than once, with France being backed to clinch all three points after eking out of one-goal win, thereby stretching their lead atop Group D of the FIFA World Cup 2022 Qualifiers even further.