Italy will be aiming to extend their perfect start to the FIFA World Cup 2022 qualification campaign when they face Bulgaria on Thursday.

The 2021/22 season has kicked off in frantic fashion while the summer transfer window has now slammed shut. With all the flurry of activity, it is now time for club football to take a back seat, with international football returning for the first time in nearly two months with the FIFA World Cup 2022 Qualifiers.

The European leg begins on Wednesday and on Thursday, newly-crowned European champions Italy will resume their campaign at home, as they play hosts to Bulgaria at the Artemio Franchi Stadium, aiming to continue their fine run of form.

Italy are quite easily the form team in Europe, having gone from strength to strength under the tutelage of Roberto Mancini. The current Italy head coach took charge of a side that was at its lowest ebb after failing to qualify for the 2018 World Cup. However, three years later, the Azzurri are European champions, becoming the team to beat in the competition.

Bulgaria, on the other hand, are the polar opposites of their hosts, having failed to win a single game in 2021 so far. In fact, the Lions last won a game back in November last year, beating Gibraltar 3-0 in a friendly. As for the 2022 World Cup qualifiers, Bulgaria have drawn one game while losing the other two so far.

Italy were 2-0 victors the last time they locked horns with Bulgaria, with Andrea Belotti and Manuel Locatelli on target in a FIFA World Cup 2022 Qualifiers outing. Ahead of the latest meeting between the two sides, The Hard Tackle takes a closer look at the encounter.

Andrea Belotti misses out for Italy with an injury. (Photo by Claudio Villa/Getty Images)

Roberto Mancini has picked pretty much the same squad that went all the way in UEFA Euro 2020, with the only major absentees being Leonardo Spinazzola and Andrea Belotti, who has pulled out from the squad due to an injury he has struggled with in the initial stages of the season.

In Belotti’s absence, it is almost guaranteed that Ciro Immobile will lead the line for Italy, with Lorenzo Insigne and Federico Chiesa likely to provide support from wide areas. The two wide men will be direct in their approach while also cutting in to allow enough marauding space for the full-backs.

Speaking of the full-backs, Giovanni Di Lorenzo ought to get the nod over Davide Calabria in the right-back slot while on the opposite end, Emerson Palmieri is the automatic pick in the absence of Spinazzola. At the heart of Italy’s defence, the ageless due of Leonardo Bonucci and Giorgio Chiellini will coninue their fine partnership.

Up ahead in midfield, the in-form Jorginho, who just cannot stop winning at the moment, will sit at the base of the three-man unit, with defensive support coming from Marco Verratti and Nicolo Barella. The duo will also look to push Italy forward, with Barella in particular being the creative force for Italy. 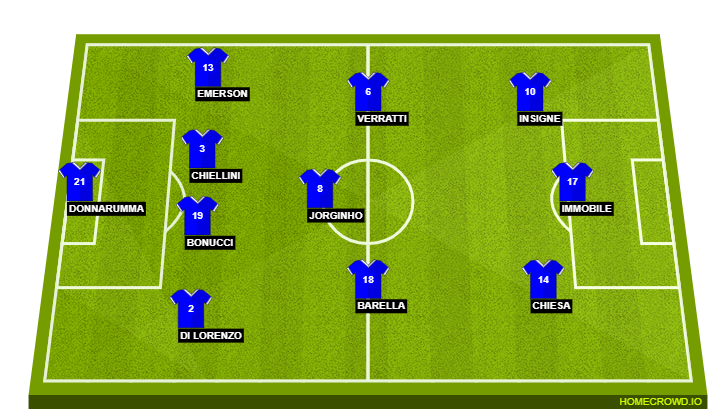 Yasen Petrov has made some alterations to the squad he had picked the last time Bulgaria were in action, back in June. The only major addition to the squad is that of Kaloyan Krastev, with as many as ten ten players being excluded this time around.

Petrov largely favours a 3-5-2 formation and he should utilise the same system against Italy as well, with Nikolay Mihaylov taking his place between the sticks. Ahead of him, Petko Hristov, Valentin Antov and Vasil Bozhikov will be installed as the three central defenders for Bulgaria.

Todor Nedelev and Birsent Karagaren are likely to be deployed as the two wing-backs, with the duo having a lot more defensive responsibility on them while also providing the width in the final third when the opportunities present themselves.

In the middle of the park, captain Georgi Kostadinov will look to keep things tight, while keeping a lid on Nicolo Barella. Kristiyan Malinov and Ivaylo Chochev will sit alongside him in midfield, looking to be disciplined off the ball and efficient on it. Finally, Kiril Despodov and Spas Delev will form the strike partnership for Bulgaria against Italy. 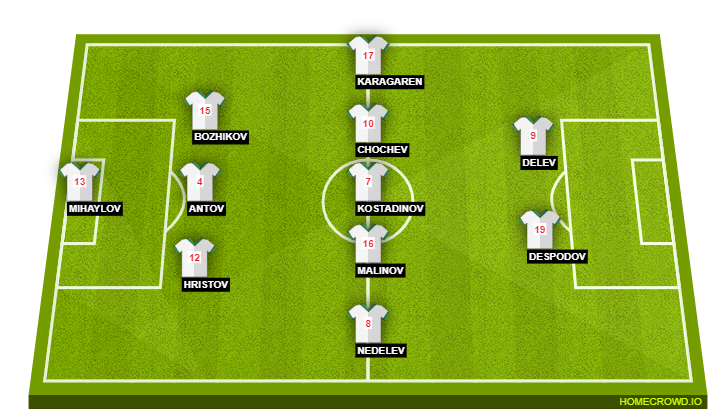 Will Immobile deliver the goods? (Photo by Claudio Villa/Getty Images)

With Andrea Belotti no longer a part of the squad, Ciro Immobile will have a lot more riding on him in the first international break of the season. As Italy look to make quick work of their qualification group for the FIFA World Cup 2022 Qualifiers, it is imperative that the attack is on the money.

To that end, Immobile will be the go-to player for Mancini, with the Italy centre-forward having the bulk of the goalscoring responsibility on him. Will the veteran striker stand up and deliver once again or will he be contained well by Bulgaria? That will be a key question for Immobile this week.

There are no two ways about it. Bulgaria are simply no match for Italy, who are riding a wave of confidence at the moment. Their turnaround under Roberto Mancini continues to be nothing short of remarkable and there simply is no stopping the Azzurri at the moment.

With the visitors being quite frugal in the final third, the hosts’ defence might well have the night off on Thursday. On the opposite end, the likes of Ciro Immobile, Lorenzo Insigne and Federico Chiesa ought to be in their elements and with that in mind, The Hard Tackle predicts a 2-0 win for Italy here.