England will be aiming to continue their perfect start to the FIFA World Cup 2022 Qualifiers when they take on Hungary at the Puskas Arena on Thursday.

The international break is here, with club football taking a fortnight-long break and the FIFA World Cup 2022 Qualifiers resuming across the world. In Europe, Matchday 4 of the qualification process has begun, and on Thursday, England will be in action in one of the more eye-catching fixtures as they lock horns with Hungary at the Puskas Arena.

Hungary were one of the more admirable national teams of the summer, having gone toe to toe with some of the most fearsome sides on the planet and holding their own for the most part. The Magyarok were indeed drawn in the group of death at UEFA Euro 2020, where they played out draws with France and Germany in two top-notch performances.

Drawn in Group I of the European leg of the FIFA World Cup 2022 Qualifiers, Marco Rossi & co. have a tricky group to get through, with England and Poland among the bigwigs they will battle. Speaking of, the Three Lions are coming off a memorable summer themselves, having reached the final of Euro 2020.

Gareth Southgate & co. might have failed to cross the final hurdle at Wembley, but there is a feeling that some major progress is being made under the tutelage of the current England boss. As far as the FIFA World Cup 2022 Qualifiers are concerned, England and Hungary are the only unbeaten teams, with the Three Lions ahead by two points after winning each of their first three games.

England were 2-1 victors the last time they clashed with Hungary, coming from a goal down after the Magyarok had taken the lead through a Phil Jagielka own goal, courtesy a brace by Steven Gerrard. Ahead of the latest meeting between the two sides, The Hard Tackle takes a closer look at the encounter.

Marco Rossi has made some minor alterations to the squad that he took to UEFA Euro 2020, with a couple of players missing out. David Siger and Filip Helander are not a part of the latest Hungary squad, with two uncapped players in Mak Tamas and Daniel Salloi being called up in their stead.

In addition, Loic Nego (COVID-19) and Gergo Lovrencsics (ankle) have been forced to withdraw from the squad due to their respective issues, giving Rossi some problems in defence. Finally, Adam Nagy will not be taking on England due to suspension, meaning there will be one forced change in midfield.

That vacant spot ought to be taken up by the returning Dominik Szoboszlai, who missed the bus to UEFA Euro 2020 due to an injury. Szoboszlai’s return is crucial, as he will provide Hungary that creative edge they need to trouble an otherwise solid England defence.

The 20-year-old will have Andras Schafer and Laszlo Kleinheisler for company in the middle of the park, with the latter taking on Nagy’s holding midfield responsibility. Behind the three midfielders, the three-man central defensive unit comprising of Endre Botka, Attila Szalai and Willi Orban, with Peter Gulacsi taking his spot in goal.

As for the two wing-backs, Bendeguz Bolla and Attila Fiola will have the task of providing the width in the final third, with the duo also having the onus on them to fall back and create a back five during the defensive phases, robbing England of space in those areas. Finally, Roland Sallai and captain Adam Szalai will form the strike partnership for Hungary against England. 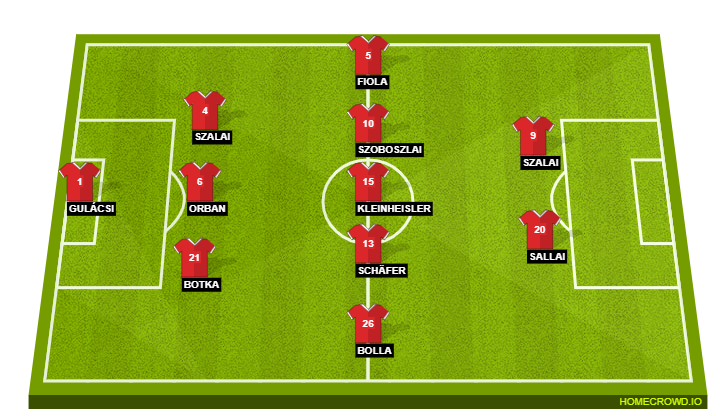 Unlike his counterpart in the Hungary dugout, Gareth Southgate has made a raft of changes to the squad that he picked for UEFA Euro 2020. In fact, as many as seven players are missing from that unit, owing to injuries or illness.

Dominic Calvert-Lewin has pulled out from the squad after sustaining an injury earlier in the week while the likes of Aaron Ramsdale, Dean Henderson, Ben Chilwell, Ben White, Phil Foden and Marcus Rashford have all missed out due to various reasons.

Finally, Jadon Sancho is struggling with a knock that he picked up in training, with the Manchester United winger likely to miss out against Hungary. In his stead, Bukayo Saka is likely to get the nod on the right wing slot, with Southgate’s go-to man Raheem Sterling taking his customary place on the left flank.

Mason Mount will be the creative force for England, reprising the no. 10 role while playing off of Harry Kane, who is always a force to be reckoned with in qualifying fixtures. In midfield, Declan Rice and Kalvin Phillips ought to retain their spots in the double pivot, meaning Jordan Henderson misses out.

Finally, at the back, Southgate has a major dilemma – as usual – in the right-back spot, with Kyle Walker expected to pip the likes of Kieran Trippier, Trent Alexander-Arnold and Reece James to that berth. The rest of the defensive lineup picks itself, with John Stones, Harry Maguire and Luke Shaw automatic starters. And in goal, there is no looking past Jordan Pickford. 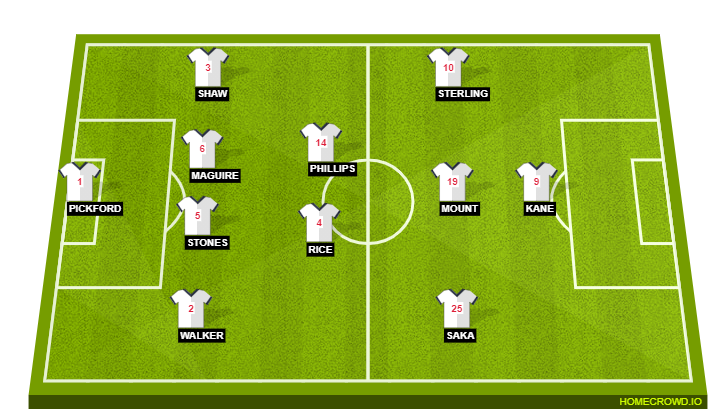 Will Harry Kane put the distractions behind and deliver the goods for Gareth Southgate? (Photo by Clive Rose/Getty Images)

After a taxing summer riddled with a memorable UEFA Euro 2020 campaign and a forgettable transfer saga involving Manchester City, Harry Kane has gone through a roller-coaster of emotions. The England captain has said that he has no regrets over the events that transpired in the summer,  but now is the time to get his head back in the game.

What better way to do so than in an environment where he thrives the most? After all, very few players manage to be as consistent as Kane in a Qualifiers setting, where he almost scores goals for fun. And in what will be perhaps the most tricky of Group I fixtures, Kane will need to be on the money for England. A big game beckons.

This is a game that is unlikely to have a lot of goals in it. While Hungary are once again expected to put up a spirited performance, England’s defence is as frugal as any in the world, with the Three Lions conceding just once in three Group I fixtures so far.

On the opposite end, Hungary have a rather vulnerable backline, although they are likely to put up a stubborn front on Thursday. In the end, though, Harry Kane should come to the fore, scoring a second half goal that ought to be enough to get England all three points and extend their advantage on top of the standings.