West Ham United will be eager to continue their brilliant start to the season when they welcome Crystal Palace to the London Stadium on Saturday.

The dreaded international break is nearly upon us, but before then, there is some serious business to be conducted, with Gameweek 3 of the 2021/22 Premier League season set to get underway. The “Goal Rush” portion of Saturday’s action will feature some intriguing games, including a London Derby, as West Ham United play hosts to Crystal Palace at the London Stadium.

West Ham United have been nothing short of fabulous at the start of the 2021/22 season. While they have not been perfect by any stretch, the Hammers have been nigh on unstoppable in the final third, meaning their defensive frailties have not been a major factor. So far, David Moyes & co. have won two games in as many matchdays, heading into this weekend perched atop the Premier League table.

Crystal Palace, on the other hand, are in a period of transition following the appointment of Patrick Vieira as Roy Hodgson’s successor at Selhurst Park. The Eagles are yet to grab their first win under the Frenchman, having opened their season with a big defeat to Chelsea before playing out a 0-0 draw with Brentford, leaving them 14th in the standings.

The corresponding fixture last season saw West Ham come from a goal down to hold Crystal Palace to a 1-1 draw, with Sebastien Haller and Christian Benteke on target for the respective sides. Ahead of the latest meeting between the two sides, The Hard Tackle takes a closer look at the encounter.

David Moyes does not have any fresh injury concerns hampering his preparations ahead of the visit of Crystal Palace. On Saturday, the West Ham United manager will only be bereft of the services of two first-team players, although he is on the verge of having a fully fit squad at his disposal.

The good news comes in the form of Arthur Masuaku’s impending return, although the game versus Crystal Palace has come too soon for him. The only other absentee is Winston Reid, who does not seem to be a part of Moyes’s plans.

Masuaku’s absence does not hurt West Ham much either, with Aaron Cresswell going strong on the left-back slot. On the opposite flank, Vladimir Coufal continues to go from strength to strength and the two full-backs will have a big role to play with their forays down the wings.

At the heart of the West Ham defence, Craig Dawson and Angelo Ogbonna will continue their partnership, especially with Kurt Zouma’s impending move yet to be completed. In goal, there is no looking past Lukasz Fabianski, who continues to keep Alphonse Areola out of the side.

Up ahead in midfield, the indomitable partnership of Declan Rice and Tomas Soucek are automatic picks in the double pivot. Both of the midfielders will provide a solid base in the middle of the park, with Soucek also being a factor in the final third, especially in set-piece situations.

As for the attacking setup, Michail Antonio, who currently leads the Premier League goalscoring charts, will continue leading the line for West Ham, with creative support coming from Jarrod Bowen, Said Benrahma and Pablo Fornals. The three players in the support cast will post a goal threat as well, with Benrahma, in particular, being in fine touch. 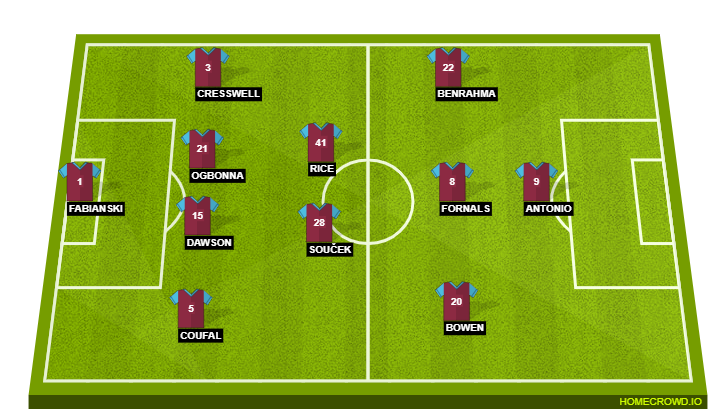 Unlike his counterpart in the West Ham United dugout, Patrick Vieira has a number of roster issues to contend with ahead of the trip to the London Stadium. On Saturday, the Crystal Palace manager will have to make do without as many as four first-team players.

Luka Milivojevic remains unavailable due to personal reasons, although he has resumed training and is slated to make his return post the international break. The other absentees for Crystal Palace are Nathan Ferguson (Achilles), Michael Olise (back) and Eberechi Eze (Achilles), although Olise is inching closer to his return.

With no changes on the team news front, Vieira should retain the players he has chosen to keep faith in his early days. Conor Gallagher was impressive in his Premier League debut for Crystal Palace last weekend against Brentford, and the young midfielder will have the creative onus on him versus West Ham.

Gallagher will provide company to Cheikhou Kouyate and James McArthur in the middle of the park, with the duo having more of a defensive outlook on the pitch. And like in West Ham’s case, Crystal Palace will be without an impending arrival, with Will Hughes yet to formally complete his move from Watford.

At the back, new boys Joachim Andersen and Marc Guehi will continue to form the central defensive partnership, with Joel Ward and Tyrick Mitchell being the two full-backs. Vicente Guaita picks himself between the sticks, with the Spaniard set to have a busy afternoon against West Ham.

Finally, in attack, Wilfried Zaha will continue being the key man for Crystal Palace, with the Eagles’ talisman being in desperate need to be back among the goals. Zaha will have Christian Benteke and Jordan Ayew for company, with the two forwards also in need of improving their output in the final third. 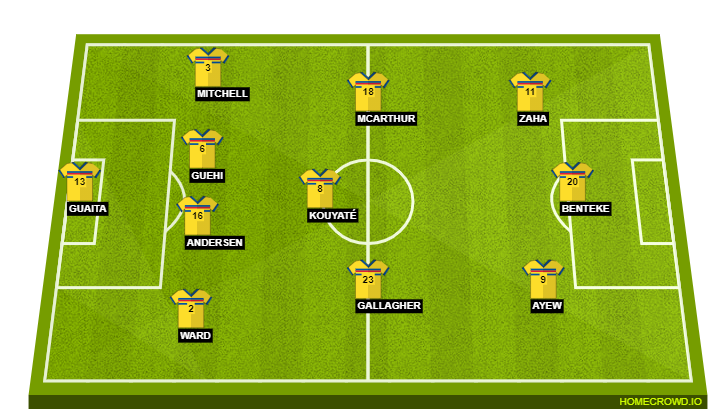 Michail Antonio will once again be under the spotlight, as he always does when West Ham United take to the pitch. However, if the Hammers are to continue their fine run of form, the one player who needs to continue at the levels he has projected of late is Said Benrahma.

Antonio’s record-breaking performance against Leicester City took some of the spotlight away from the Algerian playmaker. However, there is no denying the fact that Benrahma is finally starting to justify why a lot of money was spent on him. David Moyes now needs him to continue his fine run of form and he will once again hold the key against what would be a stubborn Crystal Palace side.

This might not be as straightforward as the scoreline suggests. West Ham United will likely have to slog it out before they finally explode in this game, and it will be a game of perseverance more than anything else. Not to forget, Crystal Palace hold a solid recent record against West Ham, although they do not seem to be prolific in any sense of the word.

With that being said, West Ham’s vulnerabilities will certainly keep Crystal Palace in the game, although the hosts should keep their first clean sheet in this game. On the opposite end, Michail Antonio ought to bring up a half century of Premier League goals for West Ham, with Said Benrahma making his mark as well, en route to a 3-0 win.