Leicester City will be desperate to get back to winning ways when they travel to Carrow Road to take on Norwich City on Saturday.

The first international break of the 2021/22 season is nearly here, and clubs across various leagues will be eager to go into the fortnight-long break with momentum on their side. One of the key games of the weekend will be played at Carrow Road, where Norwich City will play hosts to Leicester City on Saturday.

Norwich City have made a horrendous start to the 2021/22 season, with their return to the Premier League starting off on the worst possible note. The Canaries are yet to score a goal so far this term while having been beaten handsomely by Liverpool and Manchester City, leaving them rock-bottom after the first couple of gameweeks.

Leicester City, on the other hand, have endured a topsy-turvy ride in the early days of the season. The Foxes started off with a professional 1-0 win win over Wolverhampton Wanderers before being handed a 4-1 loss by a rampant West Ham United, in a game that also saw them going down to ten men. The defeat has left them down at 12th in the standings, although it is still early days.

Norwich City eked out a shock 1-0 win the last time they hosted Leicester City at Carrow Road, with Jamal Lewis scoring the only goal of the game. Ahead of the latest meeting between the two sides, The Hard Tackle takes a closer look at the encounter.

🗣 DF: "Tzolis has had calf problems since the last game. We'll assess it in the next 24 hours to see if he's available.

"Minor question mark behind Sargent, who is struggling with some glute problems, but I'm carefully optimistic he will be available." pic.twitter.com/rIIhs2ivwh

Daniel Farke has a plethora of injury concerns hampering his preparations ahead of the visit of Leicester City. On Saturday, the Norwich City manager will certainly be bereft of the services of as many as three first-team players, with four others being major doubts.

Those are certain to miss out against Leicester are Sam Byram (hamstring), Bali Mumba (knee) and Przemyslaw Placheta (match fitness). In addition, Farke is sweating over the fitness of the likes of Onel Hernandez, Christos Tzolis and Josh Sargent.

With Sargent not fit enough to start, Teemu Pukki will lead the line for Norwich against Leicester, with Todd Cantwell and Milot Rashica being the two wide men. The wingers will need to pull their socks up in order to put a vulnerable Leicester defence under pressure while Pukki is in desperate need of some inspiration.

In midfield, the onus will be on Billy Gilmour to keep a check on the output of James Maddison, while Kenny McLean and Lukas Rupp will provide him defensive support. The duo will be the workhorses in the middle of the park, with their battle against Wilfred Ndidi and Youri Tielemans being a key duel in the game.

At the back, Grant Hanley and Ben Gibson will have the unenviable task of keeping Jamie Vardy and Kelechi Iheanacho quiet, while Max Aarons and Brandon Williams, freshly signed on loan from Manchester United, being the two wide men. Finally, Tim Krul will be the man in goal for Norwich. 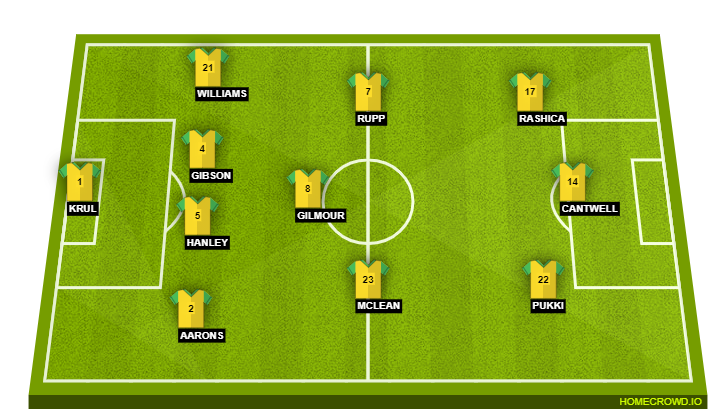 Like his counterpart in the Norwich City dugout, Brendan Rodgers is being bogged down by numerous roster issues ahead of the trip to Carrow Road. On Saturday, the Leicester City manager will have to make do without as many as six first-team players at the very least.

The only player who has been classed as a doubt is Ryan Bertrand, although the veteran full-back is unlikely to start ahead of Luke Thomas at left-back. Meanwhile, the likes of Jannik Vestergaard (knee), Jonny Evans (ankle), James Justin (knee), Wesley Fofana (leg) and Nampalys Mendy (groin) are on the sidelines.

Ayoze Perez is the final absentee, as he serves the first of his three-match ban for his dismissal against West Ham United earlier this week. Perez’s absence means Kelechi Iheanacho will finally get a chance to impress from the get-go, forming the strike partnership for Leicester alongside Jamie Vardy, with Patson Daka being an option off the bench.

The shift in formation would mean James Maddison will start on the right flank on paper, although the English international will drift inwards and take up more central positions, thereby creating the space for Ricardo Pereira to bomb forward. Harvey Barnes will be the other wide man, starting on the left wing, from where he will look to provide Thomas with overlapping opportunities.

In the middle of the park, Wilfred Ndidi and Youri Tielemans hold the key for Leicester, with the former providing a solid base in midfield while the latter looks to pave the way for smooth transitions as well as some top notch work-rate off the ball.

Defence has been the weak point for Leicester in the absence of Fofana and Evans, and Caglar Soyuncu is in desperate need to step up after a horrendous showing against West Ham. The Turk will have Daniel Amartey for company at the heart of the defence, with Kasper Schmeichel taking his place between the sticks. 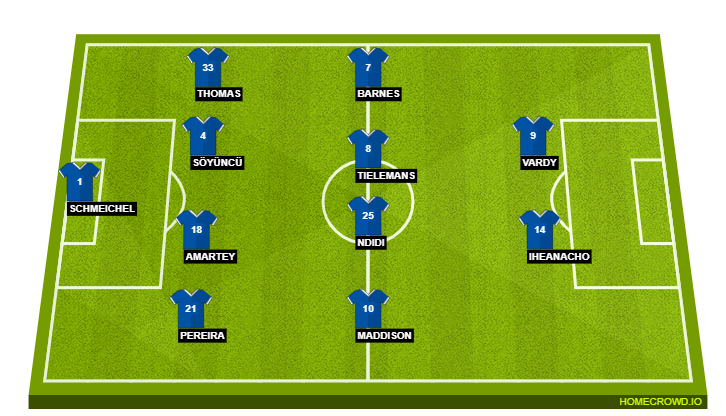 After being arguably the best player in the run-in for Leicester City, Kelechi Iheanacho has once again been relegated to the bench. This has to be a frustrating situation for a player who would have thought he was growing in stature at the King Power Stadium.

However, the suspension that Ayoze Perez is set to face has come as a silver lining for the Nigerian striker, who now has the opportunity to show Brendan Rodgers what he missed with some poor team selection. Having said that, with Patson Daka breathing down his neck, the onus will be on Iheanacho to hit the ground running. A big game for the former Manchester City prodigy.

This is a match between two teams that have flattered to deceive so far in the early days of the 2021/22 season. Norwich City just cannot manage to trouble their opponents while being as porous as ever at the back. Leicester City have their own defensive problems while being slow starters as far as their attacking output is concerned.

However, Leicester will certainly fancy themselves against a Norwich City side that has lost 12 successive Premier League games while conceding bundles of goals. The Canaries, though, will be buoyed following their brilliant showing against Bournemouth in the Carabao Cup. Having said that, it will not be enough to topple Leicester, who should eke out a narrow 2-1 win on Saturday.