A place in the UEFA Euro 2020 final will be up for grabs when England take on Denmark in the second semi-final at Wembley on Wednesday.

Just two more matches remain for the UEFA Euro 2020 champions to be crowned. The winner of the first semi-final between Italy and Spain will be awaiting the team that goes on to prevail in the penultimate fixture of the competition, wherein England will take on Denmark at Wembley on Wednesday night.

England have built their UEFA Euro 2020 campaign on the back of being the most solid unit in the competition. The Three Lions are yet to concede a goal in five matches so far and have gradually improved in the final third as well. Having not scored more than once in any of their three Group D fixtures, England first netted two past Germany before cruising to a 4-0 win over Ukraine last time out.

Denmark have been THE surprise package of UEFA Euro 2020. The Red and White made the worst possible start to the campaign, with their opener marred by Christian Eriksen’s health scare and a 1-0 defeat to Finland. A loss to Belgium meant Kasper Hjulmand & co. had it all to do. However, a 4-1 win over Russia sealed a place in the Round of 16, and subsequent victories against Wales and Czech Republic have set up the semi-final date with England.

Denmark were 1-0 victors the last time they faced England, with Christian Eriksen scoring the only goal in the UEFA Nations League tie at Wembley. Ahead of the latest meeting between the two sides, The Hard Tackle takes a closer look at the encounter.

Gareth Southgate does not have any fresh roster issue hampering his preparations ahead of the visit of Denmark for the UEFA Euro 2020 semi-finals. On Wednesday, the England head coach will have a full-strength squad at his disposal, with Bukayo Saka being passed fit to take on Denmark.

Saka, though, is unlikely to make it to the starting lineup following the impressive performance by Jadon Sancho. The newly-signed Manchester United winger will likely be retained on the right flank, with Raheem Sterling a certainty on the left-wing, having been phenomenal for England at UEFA Euro 2020.

After missing out vs Ukraine, Bukayo Saka is 🔙 for Denmark

🗣 Gareth Southgate: “He will go back into full training with the group on Monday and he should be fine.” 🏴󠁧󠁢󠁥󠁮󠁧󠁿 pic.twitter.com/RuTZ7oCP0e

Reprising the no. 10 role will be Mason Mount, with Harry Kane leading the line for England. Sancho, along with Mount, will be tasked with finding the line-breaking passes while Sterling will take up pockets of spaces created by Kane’s movement, with the England captain having the license to roam freely in the final third.

As for the midfield unit, Jordan Henderson has made a case for inclusion in the starting lineup after coming off the bench to score the fourth goal in the 4-0 win over Ukraine while also being lauded by Kane. However, Southgate is unlikely to tinker with the tried and tested formula, meaning Declan Rice and Kalvin Phillips will retain their spots in the double pivot.

Finally, at the back, there is no reason to chop and change, meaning the solid central defensive partnership of John Stones and Harry Maguire will once again be flanked by Kyle Walker and the in-form Luke Shaw. The two full-backs will also have a lot riding on them with their deliveries in the final third. In goal, there is no looking past Jordan Pickford. 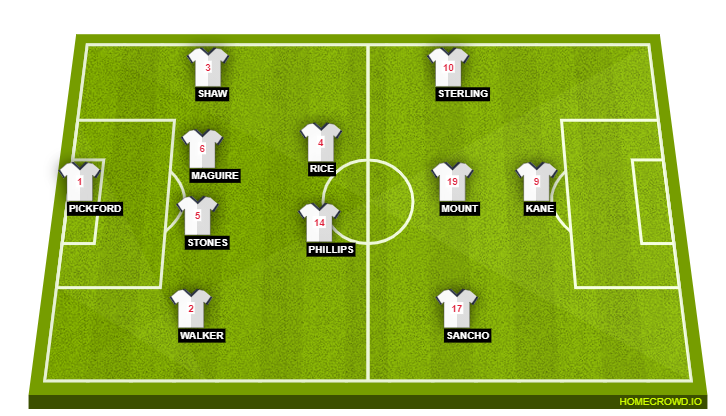 Like his counterpart in the England dugout, Kasper Hjulmand has a fully-fit squad to choose from apart from the obvious absence of Christian Eriksen. On Wednesday, the Denmark head coach is likely to name an unchanged eleven bar a late fitness-related update, considering just how well the entire unit has been performing.

With that in mind, Kasper Schmeichel is the automatic pick between the sticks for Denmark, who will be set up in a 3-4-3 formation against England. The three-man central defensive unit will feature Andreas Christensen, Simon Kjaer and Jannik Vestergaard.  Kjaer will play the sweeper role, with Christensen and Vestergaard remaining compact in the defensive phases.

While in possession, the duo will spread out to create more passing options, with the wing-backs charging upfield to add to the bodies in the final third. Jens Stryger Larsen, who will also be on set-piece duty, and Joakim Maehle will carry a lot of threat in the final third, with the pair also tasked with dropping deep to create a back five when off possession.

Pierre-Emile Hojbjerg and Thomas Delaney will hold the fort in the middle of the park, where they will not only aim to keep a lid on Jadon Sancho and Mason Mount but also battle with their counterparts. At the same time, Delaney will also look to catch England unaware with his ghosting runs, while Hojbjerg will aim to unleash his defence-splitting passes.

Finally, the three-man attacking unit will be formed by Martin Braithwaite, Kasper Dolberg and Mikkel Damsgaard. The trio will form a fluid attacking partnership, although Dolberg will still largely take up central areas while also being a target man for the deliveries from the flanks. 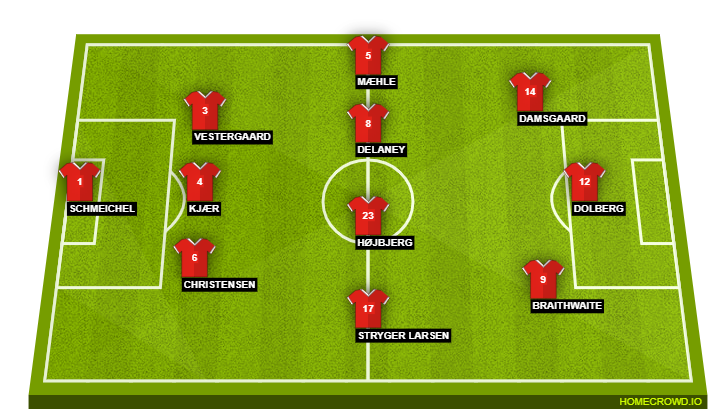 Will Kane rise to the occasion again? (Photo by Alex Morton/Getty Images)

It took some time for Harry Kane to get going, but he is finally up and running at UEFA Euro 2020. A complete dud during the group stage, the England captain has come into his own and now finally seems to be enjoying his football, as was best evident against Ukraine.

Denmark, though, will pose a far greater test and getting the better of a disciplined defensive unit will take some doing. Therefore, Kane will need to be at his menacing best to extend his scoring run and turn it into a hot streak, thereby possibly paving the way for England to reach their first final of a UEFA European Championship.

This segment of ours this time around is a straight head-to-head battle between the two captains. Kane has started leading from the front ever since the knockout stage of UEFA Euro 2020 began, but Simon Kjaer has been an inspiring leader for Denmark right from the very first game.

On Wednesday, Kjaer will have to produce the goods once again at the back in order to shut out Harry Kane, which will then force Gareth Southgate to take some desperate measures. It will also render England’s attack to be more one dimensional and so, Kjaer’s performance will go a long way in determining the outcome of the game.

As iterated previously, each of the seven meetings between England and Denmark at Wembley have ended with the same scoreline – a 1-0 win for either side. This time around, though, a different scoreline is likely, with chances of the game going to extra time also being high.

With both the teams being as solid as they are, chances are likely to come few and far between. As the minutes tick by, though, the openings could start getting engineered more frequently, and it is at this time when England’s quality could shine best. Expect Harry Kane to graft his way to the top of the scoring charts, inspiring England to a 2-1 win over Denmark and seal a place in the final.