Spain will hope to finally kick-start their UEFA Euro 2020 campaign and reach the Round of 16 when they face Slovakia in their last Group E tie on Wednesday.

Just one day remains for the group stage of UEFA Euro 2020 to culminate, with Matchday 3 ties involving Group E and Group F being played on Wednesday. First up on the day will be one of the powerhouses of European football, as Spain play hosts to Slovakia at Estadio de la Cartuja, hoping to clinch a place in the knockout phase of the competition.

Slovakia have endured a mixed bag of a campaign at UEFA Euro 2020, winning their opening game by narrowly eking out a 2-1 result against Poland. In Matchday 2, the Falcons were beaten 1-0 by Sweden, which has put them in a spot of bother ahead of their final Group E clash, although that is the only reverse for Stefan Tarkovic’s men in 2021.

Spain, on the other hand, have faced just one defeat since Luis Enrique returned to the helm of the national side. Having said that, La Roja have hardly set the stage alight with their performances, winning just six times in 15 games. And at UEFA Euro 2020, Spain have been one of the more disappointing teams, playing out a draw in each of their two games so far.

Spain were 2-0 victors the last time they locked horns with Slovakia, with Jordi Alba and Andres Iniesta finding the back of the net in the UEFA Euro 2016 qualifying fixture. Ahead of the latest meeting between the two sides, The Hard Tackle takes a closer look at the encounter.

Ondrej Duda will be the man leading the line for Slovakia versus Spain. (Photo by Ian Walton/Getty Images)

Stefan Tarkovic does not have any fresh injury concerns hampering his preparations ahead of his side’s final Group E game at UEFA Euro 2020. Against Spain on Wednesday, the Slovakia head coach will have a full-strength squad at his disposal and should name his strongest side in the game.

Martin Dubravka will take his place in goal for Slovakia, who will line up in a 4-2-3-1 formation against Spain. Lubomir Satka and Milan Skriniar are expected to form the central defensive partnership, with Peter Pekarik and Tomas Hubocan being the two full-backs, who will have a lot riding on them in the game in both phases of the game.

Up ahead in midfield, Juraj Kucka and Patrik Hrosovsky will take their respective places in the double pivot, with the duo aiming to keep things tight in the middle of the park. The key midfielder for Slovakia will be captain Marek Hamsik, who will drive the Falcons forward against Spain.

As for the attack, Ondrej Duda ought to lead the line for Slovakia in Seville, with Lukas Haraslin and Robert Mak being the two wide men for the visitors. Duda’s movement will hold the key for the visitors against Spain, bringing the rest of the attacking players into the game. 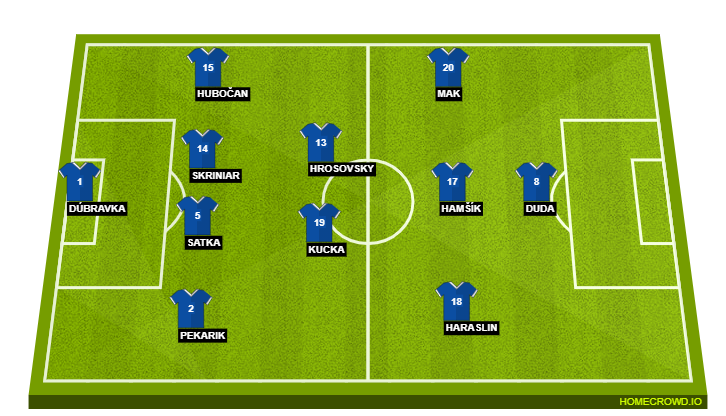 Like his counterpart in the Slovakia dugout, Luis Enrique has a fully fit squad to choose from ahead of his side’s Matchday 3 Group E encounter at Estadio de la Cartuja. The Spain boss should, in fact, make some key changes to the starting lineup this midweek to spark a shift in fortunes.

However, there is unlikely to be any change in goal and defence, with Unai Simon taking his place between the sticks for Spain, who will be set up in a 4-3-3 formation. As for the defensive unit, Pau Torres and Aymeric Laporte will once again pair up at the heart of the four-man backline, with Jordi Alba and Marcos Llorente being the two full-backs.

Up ahead in midfield, at least one change is expected, with captain Sergio Busquets returning to the starting lineup for the first time since recovering from COVID-19. Thiago Alcantara could also be recalled, replacing Koke in the middle of the park to provide better creative impetus along with Pedri, who ought to keep hold of his spot.

Finally, in attack, Gerard Moreno could be relegated to the bench despite his fine form for Villarreal in 2020/21. Alvaro Morata is one of the go-to players for Enrique and will spearhead Spain’s attack, with Ferran Torres and Adama Traore providing the cutting edge from the wings. 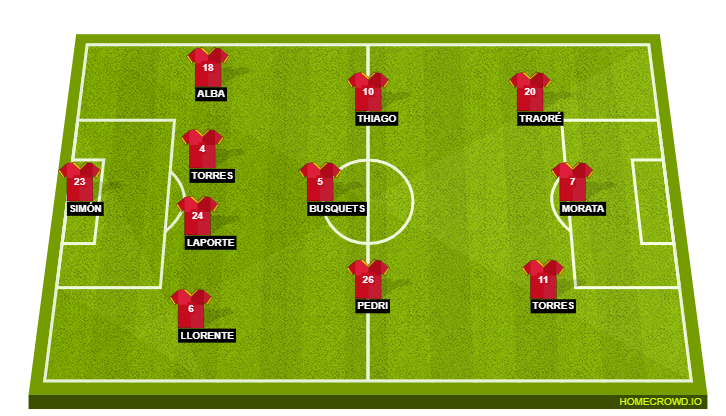 Will Skriniar be the hero against Spain? (Photo by Marco Bertorello/AFP/Getty Images)

Spain have hardly been a force to be reckoned with in the final third, but the objective for Slovakia will be to frustrate an already exasperated attacking unit, which has only found the back of the net once. In order to keep Spain at bay for longer periods, Milan Skriniar will have the onus on him to keep the Slovakian backline organised.

The 26-year-old’s prowess in the air will also make Skriniar a factor on the other end of the pitch, with Slovakia posing a great deal of threat from set-piece situations. All in all, it is a big game for Skriniar, who will need to be at his very best to earn a big result for his side.

Speaking of Spain’s output in the final third, and Adama Traore could well be the difference-maker. Likely to be handed an opportunity to feature from the get-go, Traore has that X-factor that can give Luis Enrique & co. the cutting edge they have been lacking desperately in the final third.

While he might not have the required end product, his pace and movement can still bring the other attacking players into the game if he can manage to stretch an otherwise resolute and stubborn Slovakian defence. Will Traore produce the goods for Spain?

Make no mistake about it. Slovakia have what it takes to make Spain drop points for the third game in a row. For large parts of the proceedings, the Falcons should do exactly that, with the visitors even nabbing a goal to make matters more interesting in the game.

However, bench strength is likely to become a factor in the dying embers of the game, and it is here that Spain could nick the game by the slightest of margins. With that in mind, The Hard Tackle predicts a 2-1 win for Luis Enrique & co. in a result that will send them through to Round of 16.