AC Milan will be desperate to clinch a top four finish in Serie A when they take on Atalanta at Stadio Atleti Azzurri d’Italia on Sunday.

The curtains are set to fall on the 2020/21 season all across Europe and in Italy, Matchday 38 will be played out. The top four race is still ongoing, with the competition for places being intense, and AC Milan will hope to return to the UEFA Champions League, although they face a lot of stiff competition from Atalanta, as the two sides prepare to lock horns with each other at the Gewiss Stadium.

Atalanta have once again been one of the most attractive teams in Europe, and have already gone on to amass as many points as they racked up last season – 78. In addition, La Dea’s recent form has been top notch, especially at home, where they have won each of their last seven games. But, Gian Piero Gasperini & co. will have been deflated by the defeat to Juventus in the Coppa Italia final.

AC Milan, on the other hand, have produced one of the worst bottle jobs in the 2020/21 season. Having once been the runaway leaders in Serie A, the Rossoneri have been extremely inconsistent since the turn of the year and have been looking over their shoulders, fighiting hard to secure a top four finish over the last few months. Stefano Pioli’s men, though, have their fate in their own hands and will hope to get the job done on Sunday.

The reverse fixture, played at San Siro back in January, saw Atalanta cruise to a 3-0 win over AC Milan, with Cristian Romero, Josip Ilicic and Duvan Zapata on target. Ahead of the latest meeting between the two sides, The Hard Tackle takes a closer look at the encounter.

Gian Piero Gasperini hardly has any pressing injury concerns hampering his preparations ahead of the visit of AC Milan. On Sunday, the Atalanta manager will only be bereft of the services of one first-team player, with Viktor Kovalenko nursing a hamstring injury.

Therefore, Gasperini ought to name his strongest possible lineup against AC Milan on Sunday, with Pierluigi Gollini taking his place in goal. In front of the 26-year-old, Atalanta will likely line up in a 3-4-1-2 formation, with Rafael Toloi, Cristian Romero and Berat Djimsiti forming the three-man central defensive unit.

Up ahead in midfield, the onus will be on Marten de Roon and Remo Freuler to build a solid base to provide cover to the defence and in turn, allow the wing-backs and the front trio to express themselves better. Speaking of the wing-backs, Joakim Maehle and Robin Gosens are expected to get the nod for Atalanta.

The key man in attack will be the in-form and record-breaking Ruslan Malinovskyi, who has recently been linked with Chelsea. Luis Murial has been in inspired touch as well and the Colombian forward will form the strike partnership with compatriot Duvan Zapata against Milan. 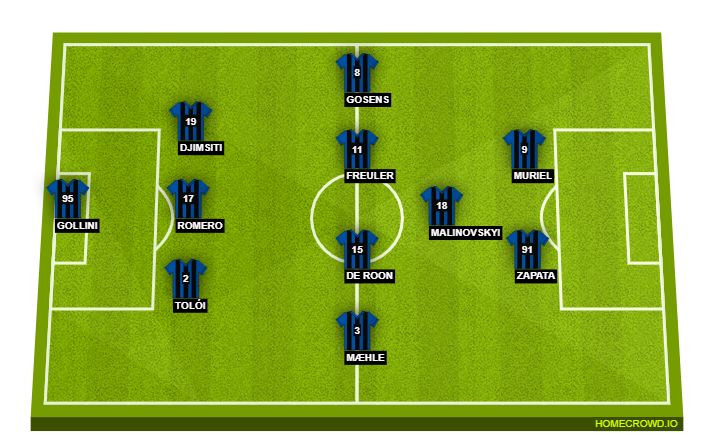 Unlike his counterpart in the Atalanta dugout, Stefano Pioli has received a fresh setback on the team news front ahead of the short trip to the Gewiss Stadium. On Sunday, the AC Milan manager will have to make do without at least two first-team players, with another squad member struggling to prove his fitness ahead of the game.

Matteo Gabbia (hamstring) and Zlatan Ibrahimovic (knee) are certainly unavailable and will only play a part for AC Milan next season onwards. In addition, Pioli has revealed that he is sweating over the fitness of Ante Rebic, who was unable to complete full training on Saturday.

Judging by Pioli’s comments it is likely that Rebic will only be an option off the bench, with Rafael Leao now set to lead the line for Milan against Atalanta. The Portuguese forward will receive creative support from Hakan Calhanoglu and Brahim Diaz, while Alexis Saelemaekers will be direct in his approach in the final third.

As for midfield, there is no looking past the pairing of Ismael Bennacer and former Atalanta star Franck Kessie in the double pivot, with the duo forming a dynamic tandem. Not only will they aim to provide definitive cover to the backline, the two midfielders will also provide precise progression with the ball at their feet.

Speaking of the backline, Simon Kjaer and Fikayo Tomori should pair up at the heart of the Milan defence, with Davide Calabria and Theo Hernandez being the two full-backs. Finally, in goal, there is no looking past Gianluigi Donnarumma, who was a rare positive last time out against Cagliari and will once again be pivotal between the sticks versus Atalanta. 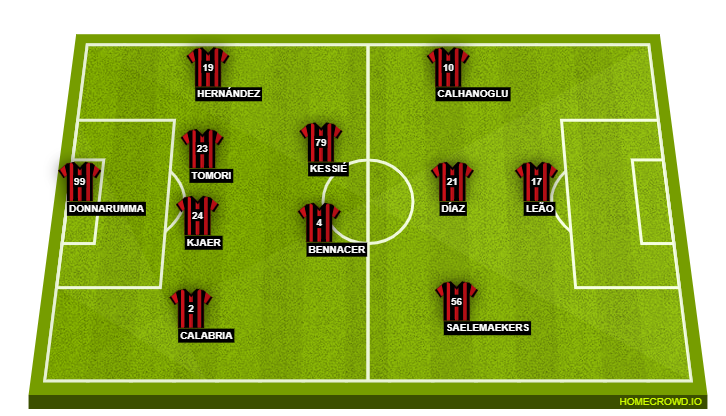 While a lot of the focus will be on both the sets of attacking players and rightly so, how Gianluigi Donnarumma fares in the AC Milan box will go a long way in determining the final outcome of the game. If in inspired form, there will be nothing going past the Italian international, although Atalanta will have something to say about that.

In addition, this could also well be farewell for Donnarumma, as far as AC Milan and Serie A is concerned. The 22-year-old has recently been linked with a shock move to Barcelona. However, if he does manage to inspire the Rossoneri to a crucial win, the former Italian champions might just be able to keep hold of Donnarumma. A big game beckons.

Atalanta are expected to pull no punches, especially considering they have already secured a place in the UEFA Champions League next season. However, La Dea’s gung-ho style of play could work well for AC Milan, who can exploit the holes at the back, but will need to be clinical.

The Rossoneri, though, do not have a lot of firepower on the bench and will need to strike early in order to be in a relatively comfortable state. With that in mind, we predict the visitors to grab a win by the narrowest of margins – a 2-1 victory for AC Milan, which helps them seal a top four finish in Serie A,