West Ham United will be determined to seal a top six finish when they welcome Southampton to the London Stadium on Sunday.

The 2020/21 Premier League season is reaching its climactic end, with all the final ten games of the campaign being played at the same time on Sunday. The race for the European places has never been as interesting and as far as the top six chase is concerned, West Ham United will hope to book their place in the UEFA Europa League when they host Southampton at the London Stadium.

West Ham United have had a 2020/21 season to remember. After all, less than a year ago, the Hammers had been miring on the wrong end of the table, battling to retain their Premier League status. Fast forward to May 2021, and the Hammers are firmly in the driver’s seat to finish sixth and secure a place in the Europa League next season, with Tottenham and Everton three points behind.

Southampton, on the other hand, have endured a difficult second half of the season, wherein they ended up on a free fall down the Premier League table. However, a strong first half of the campaign had meant that the Saints were always going to be comfortable. And, the visitors seem to be ending 2020/21 on a reasonably strong note, having won two of their last three games.

The reverse fixture, played at St. Mary’s back in December, saw Southampton and West Ham play out a goalless draw. Ahead of the latest meeting between the two sides, The Hard Tackle takes a closer look at the encounter.

David Moyes does not have any fresh injury concerns hampering his preparations ahead of the visit of Southampton. On Sunday, the West Ham United manager will have to make do without three first-team players at the very least, while he is also sweating over the fitness of a key squad member.

Lukasz Fabianski continues to recover from a knee injury he sustained ahead of the game against West Bromwich Albion last time out and Moyes has iterated that he will take a late decision on the Pole’s involvement. Otherwise, the West Ham boss is missing the services of Arthur Masuaku (knee), Mark Noble (knock) and Manuel Lanzini (groin).

Fabianski is a certain starter if he is able to prove his fitness, but in case does not, Darren Randolph will step in to man the goal for West Ham, who will line up in a 4-2-3-1 formation in the front of the goalkeeper. The defensive line pretty much picks itself, with Vladimir Coufal and Aaron Cresswell being the two fullbacks, while Craig Dawson and Angelo Ogbonna will form the central defensive partnership.

Up ahead in midfield, the onus will be on skipper Declan Rice to keep a check on his opposite number, James Ward-Prowse. Rice will have Tomas Soucek for company, with the Czech midfielder being an threat during set-piece situations while also remaining solid behind the ball.

Much of the rest of the side is a n automatic pick, apart from the personnel on the left wing, though Said Benrahma could get the nod over Pablo Fornals. On the right flank, Jarrod Bowen is a certainty while Jesse Lingard and Michail Antonio will be the go-to men for goals for West Ham against Southampton. 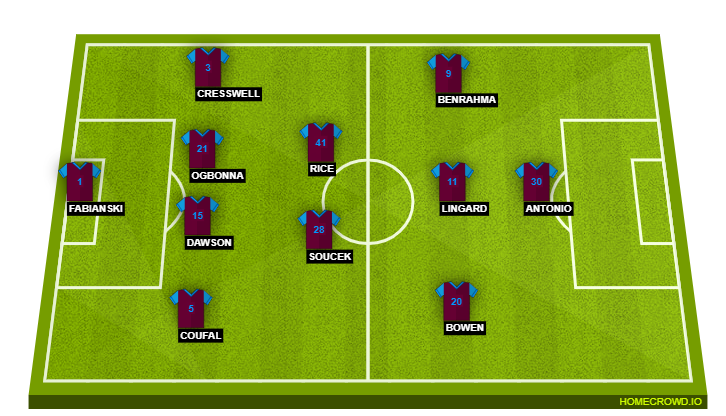 Unlike his counterpart in the West Ham United dugout, Ralph Hasenhuttl has greeted a mixed bag of updates on the team news front ahead of the trip to the London Stadium. On Sunday, the Southampton boss will be bereft of the services of three first-team players.

The bad news is that Che Adams has played his final game this season and will miss out against West Ham due to a minor groin injury. Ryan Bertrand (calf) and William Smallbone (knee) are the other two absentees for Southampton, although the good news comes in the form of Oriol Romeu’s return, with the midfielder in contention to feature on Sunday.

Romeu, though, might not be fit enough to start, meaning James Ward-Prowse could have Stuart Armstrong for company in the midfield double pivot. Out on the flanks, Theo Walcott and Moussa Djenepo are expected to be the two wide midfielders, with the duo being direct in their approach play.

Meanwhile, in the absence of Adams, Nathan Tella is expected to line up alongside Danny Ings in the strike partnership. Another major contentious position is the left-back slot, where Mohammed Salisu could get the nod, with Kyle Walker-Peters a certainty on the right flank. At the heart of the Southampton defence, Jack Stephens should have Jannik Vestergaard for company. 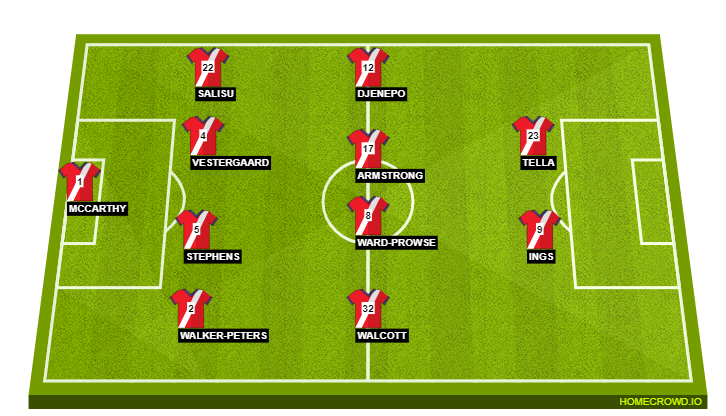 While much of the spotlight will be on the top-notch attacking players that are set to adorn the game, Declan Rice and James Ward-Prowse will perhaps, be the most important players. However, it is Rice who takes the cake in this section, considering this could well be his final game for West Ham, amid interest from some of the biggest clubs in England.

What better way to bow out than by sealing a place in Europe for his beloved team. With West Ham needing just a point to ensure their place in the UEFA Europa League next term, it will be up to Rice to ensure he keeps things tight in the middle of the park and thereby set the base for his teammates out in the front to flourish. A big game for Rice and the Hammers.

This is a game that is likely to be a close one. Southampton have improved to a great extent in May and seem to be moving in the right direction again. However, the Saints have been miserable on the road since the turn of the year and still appear to be fairly suspect at the back, even if their attack has stepped up.

West Ham, on the other hand, are riding a wave of confidence at the moment and it hardly looks like they can be stopped in their tracks by Southampton. Jesse Lingard, in particular, will be keen on making his mark, as he prepares for a big summer and he could be the one to make a difference in the end. With that in mind, The Hard Tackle predicts a 2-1 win for David Moyes & co. here.