Liverpool will have the chance to climb back into the Premier League top four when they take on Burnley at Turf Moor on Wednesday.

The race for a top four finish is heating up in the final week of the 2020/21 Premier League season, further being thrown wide open following the game between Chelsea and Leicester City on Tuesday. On Wednesday, Liverpool will hope to get back in the UEFA Champions League places when they lock horns with Burnley at Turf Moor.

Burnley have endured quite a roller-coaster of a 2020/21 campaign, having briefly flirted with the prospect of being relegated before finding stable footing, as they so often do under Sean Dyche. Having said that, the Clarets are not as stubborn a defensive unit as they once were, which often gives the opposition the initiative to take points off of them – something that has happened 26 times this term.

Liverpool, on the other hand, have been a similar ride. Once touted to be contenders for the title for a third successive season, the Reds have been nowhere near the title picture and have instead been desperate to claim a top four finish, with their downfall being brought about by an abysmal record at home since the turn of the year. However, Jurgen Klopp & co. are unbeaten in the Premier League since March, with their latest result a 2-1 win over West Bromwich Albion.

The reverse fixture, played at Anfield back in January, saw Burnley claim a shock 1-0 win, in a game that sparked the horrendous six-game losing run at Anfield for Liverpool. Ahead of the latest meeting between the two sides, The Hard Tackle takes a closer look at the encounter.

"Nick Pope is touch and go, Dale Stephens and Phil Bardsley both had operations and will miss it and Kevin Long and Robbie Brady are both still unavailable."

The big talking point for Sean Dyche in the build-up to the game against Liverpool this midweek is the fitness situation of Nick Pope. During his pre-match press conference, the Burnley manager has described the English international’s situation as “touch and go” and it is likely that he will only return on the weekend against Sheffield United, keeping one eye on the upcoming Euros as well.

With Pope possibly missing out again, Bailey Peacock-Farrell will get another run-out between the sticks for Burnley. The hosts, meanwhile, continue to be bereft of the services of Kevin Long (Achilles), Phil Bardsley (hernia), Dale Stephens (ankle), Robbie Brady (Achilles).

Burnley will line up in their usual 4-4-2 formation against Liverpool, with James Tarkowski and captain Ben Mee forming the central defensive partnership. Out wide, Matthew Lowton and Charlie Taylor are expected to be the two full-backs, with the duo largely remaining pinned back to frustrate the likes of Sadio Mane and Mohamed Salah.

Up ahead in midfield, the onus will be on the first bank of four to keep a check on their opposite numbers in the middle of the park. Josh Brownhill, Jack Cork and Ashley Westwood will form a midfield trifecta that will aim to shore things up in the middle of the park, while Dwight McNeil will provide the creative impetus for the two strikers – Chris Wood and Ashley Barnes. 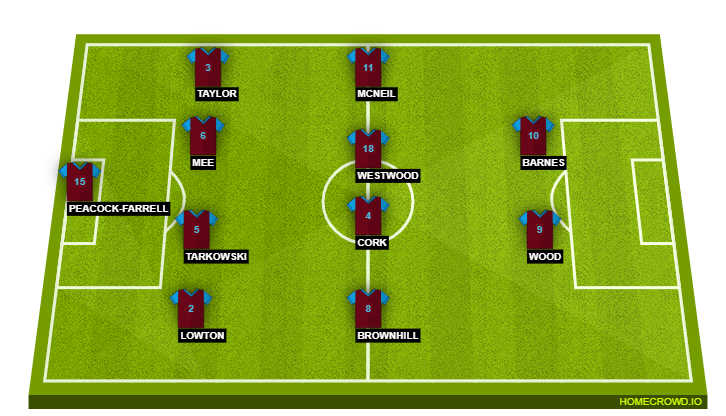 Unlike his counterpart in the Burnley dugout, Jurgen Klopp has been handed a boost on the team news front ahead of the trip to Turf Moor. On Wednesday, the Liverpool manager will have to make do without as many as eight first-team players.

The absentees are namely Virgil van Dijk (knee), Joel Matip (ankle), Joe Gomez (knee), Ozan Kabak (muscle injury), Ben Davies (muscle injury), Naby Keita (knock), Jordan Henderson (groin) and Diogo Jota (ankle). The good news, though, is the fact that Jota’s injury is not as worse as was initially feared, with the Portuguese forward likely to be available for the final game this weekend.

James Milner and Alex Oxlade-Chamberlain, meanwhile, are fit enough to return, although neither is expected to make it to the starting lineup. In their stead, Georginio Wijnaldum, Fabinho and Thiago Alcantara will form the three-man midfield unit, with Curtis Jones a backup option.

As for the attack, with Jota not available just yet, Sadio Mane, Roberto Firmino and Mohamed Salah pick themselves again. Meanwhile, in defence, Rhys Williams and Nathaniel Phillips should pair up at the centre, with Trent Alexander-Arnold and Andrew Robertson being the two full-backs. Finally, Alisson Becker, who scored the match-winner against West Brom last time out, will take his place in goal. 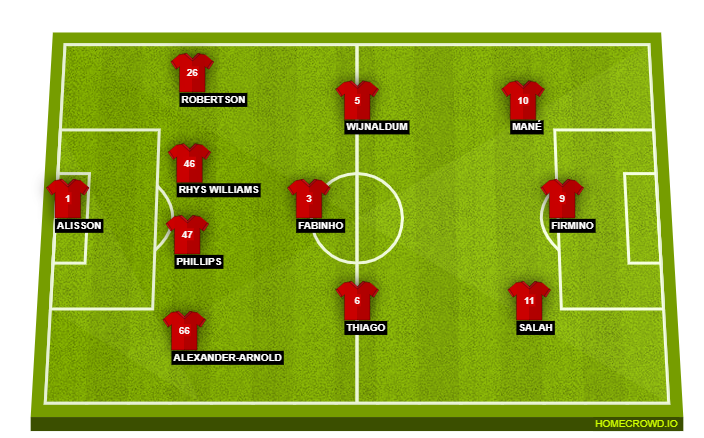 Liverpool have well and truly turned a new leaf over the past couple of months in the Premier League even if they are not in full flow at all times. That is partly because Mohamed Salah has often had to do the job of some of his attacking partners, one of them being Sadio Mane.

Ever since he joined Liverpool from Southampton, Mane has prided himself on being consistent in the final third for the most part. 2020/21, though, has been a season to forget, with the 29-year-old yet to even get into double figures for goals this term in the Premier League.

Therefore, it is no wonder that Liverpool have struggled for goals as a unit at times this season. However, with just two games remaining, now is the time for Mane to rediscover the verve that has been missing and end the season on a high. Will Mane step up and support Salah ably? Only time will tell.

Over the years, Burnley have been a side that has not been easy to beat, particularly at Turf Moor. When fans return to the stadium on Wednesday, the Clarets could well rediscover the stubbornness that has been missing from their game this term for the most part.

However, that goal by Alisson will surely have galvanized Liverpool, who have seen Mohamed Salah and Trent Alexander-Arnold step up. With that in mind, the outgoing Premier League champions should do enough to grab all three points here at the end of a hard-fought battle. The Hard Tackle, thus, predicts a 2-0 win for Jurgen Klopp & co.