AC Milan will hope to consolidate their place in the top four when they take on Torino at the Olympic Grande Torino Stadium on Wednesday.

The games continue to come thick and fast all across Europe, with the 2020/21 season coming to a frantic end. In Italy, Matchday 36 will be played this week, with three of the top four contenders in action on Wednesday, each of whom will have a keen eye on Napoli’s outing with Udinese. And, AC Milan will hope to build on their win over Juventus when they lock horns with Torino.

Torino have endured a difficult 2020/21 campaign, wherein they have flirted with relegation for the most part. However, having been beaten just once in the last seven games, the Granata have pulled clear of the drop zone and are four points ahead of 18th-placed Benevento to set themselves up with a great chance to retain their Serie A status.

AC Milan, on the other hand, have endured a season of two halves, having been the pacesetters till the end of 2020. The turn of the year signalled a free fall for the Rossoneri, who are now battling for a top four finish. The 3-0 win over Juventus this past weekend, though, has set Stefano Pioli & co. up for a strong end to the season, although they still cannot afford another slip-up.

The reverse fixture, played at San Siro back in January, saw AC Milan run out 2-0 victors over Torino, with Rafael Leao and Franck Kessie on target. Ahead of the latest meeting between the two sides, The Hard Tackle takes a closer look at the encounter.

Davide Nicola has a fresh roster issue hampering his preparations ahead of the visit of AC Milan. On Wednesday, the Torino manager will have to make do without as many as three first-team players due to injuries or suspension.

The fresh absentee for Torino is Nicolas N’Koulou, who will be serving a one-match ban due to an accumulation of yellow cards. In addition, Vanja Milinkovic-Savic (ankle) and Nicola Murru (hamstring) are the other two players who miss out for Torino against AC Milan.

In the absence of N’Koulou, Lyanco ought to return to the starting lineup to start alongside Gleison Bremer and Alessandro Buongiorno in the three-man central defensive unit. Salvatore Sirigu is the automatic pick between the sticks for Torino, with Milinkovic-Savic not available.

Up ahead in midfield, the onus will be on Rolando Mandragora and Tomas Rincon to keep a lid on the output of Hakan Calhanoglu and thus, keep the chances for AC Milan down to a bare minimum. Simone Verdi will provide the creative impetus for Torino, while also giving the two defensive-minded midfielders enough support off the ball.

The two wing-backs – Mergim Vojvoda and Cristian Ansaldi – will have the task of providing the width higher up the pitch while also dropping deep to create a back five in the defensive phases. Finally, the strike partnership will be formed by Antonio Sanabria and captain Andrea Belotti, who will spearhead the Torino attack against AC Milan. 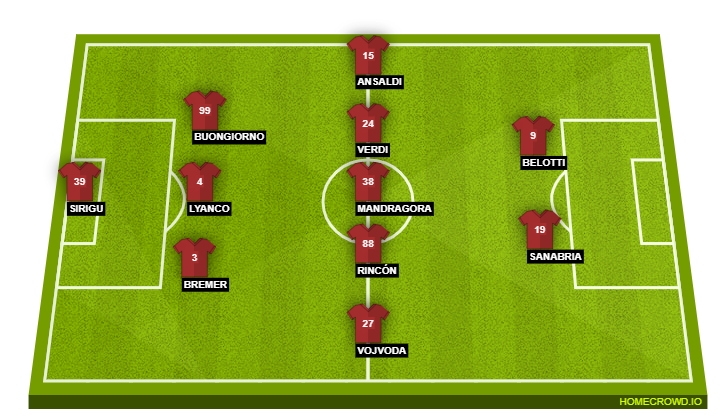 Like his counterpart in the Torino dugout, Stefano Pioli has some pressing concerns to contend with ahead of the trip to the the Olympic Grande Torino Stadium. On Tuesday, the AC Milan boss will have to make do without two first-team players.

The major absentee for Milan will be Zlatan Ibrahimovic, who has sustained a knee injury that is likely to keep him sidelined for a couple of games at the very least. In addition, Alexis Saelemaekers is also unavailable, with the Belgian winger being a big miss following some improved displays of late.

In the absence of Saelemaekers, Brahim Diaz ought to move out to the right flank, with Ante Rebic, who scored a wondrous goal against Juventus, coming in for Ibrahimovic. The Croat will lead the line for AC Milan against Torino, with Hakan Calhanoglu playing off of him. Calhanoglu’s vacated spot on the left ought to be taken up by Rafael Leao, who gets a chance to impress.

In midfield, Franck Kessie and Ismael Bennacer will continue to pair up in the double pivot, with the duo key to Milan’s possible dominance over Torino in the middle of the park. At the back, there is unlikely to be a change, with Fikayo Tomori keeping hold of his spot ahead of captain Alessio Romagnoli. Simon Kjaer, Theo Hernandez and David Calabria complete the backline with Gianluigi Donnarumma starting in goal. 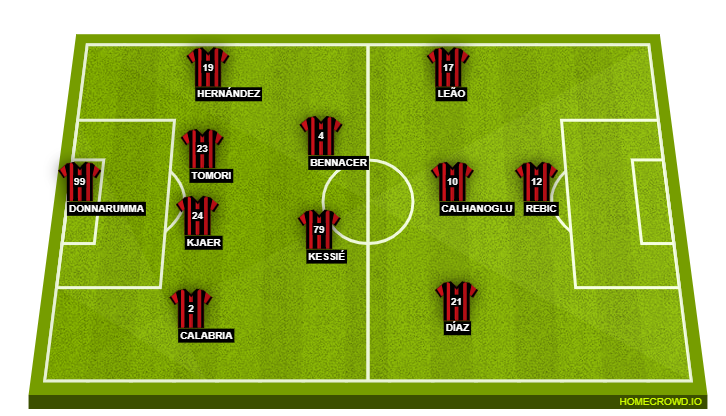 It has been quite a difficult season for Rebic, who has blown hot and cold all through the campaign and has hence, been in and out of the side quite regularly. Zlatan Ibrahimovic’s latest injury, though, gives him a chance to nail down his spot in the side, at least on the left flank if not through the middle.

The bright cameo against Juventus showed that he can step up and the challenge now is to be more consistent over the course of 90 minutes instead of just over a minor period. A strong showing will also bode well for Milan, who need to be on top of their game in order to nail down a top four spot. A big game beckons Rebic.

This is a potential banana skin game for AC Milan, as Juventus got to experience a few weeks ago.  Torino are the draw specialists in Serie A, but with Milan likely to breach their goal at least once, the hosts could well end up on the wrong end of the result, with the Rossoneri being rather solid at the back on their travels. With that in mind, The Hard Tackle predicts a 1-0 win for Stefano Pioli’s charges.