Manchester City will hope to confirm their status as the Premier League champions when they welcome Chelsea to the Etihad on Saturday.

The Premier League title race is all but over, but the formality of mathematical confirmation still remains. Manchester City will have to chance to seal the deal this weekend, when they play hosts to Chelsea at the Etihad on Saturday evening, in what will also be a dress rehearsal of sorts for the UEFA Champions League final later this month.

Manchester City have been absolutely sensational since December, although in the past month or so, they have surprisingly lost a couple of league game at home. But, with the Citizens boasting the best defensive and attacking record in the division, it is hardly a surprise that they are cruising to the title, with nearest challengers Manchester United 13 points adrift.

Pep Guardiola & co. will further have been buoyed by the win over PSG, which confirmed their place in the UEFA Champions League final. And joining Manchester City in the grand finale in Istanbul later this month will be Chelsea, who eased past Real Madrid to set up the date with their rivals.

The Blues have been transformed under the tutelage of Thomas Tuchel, having kept a clean sheet in 18 of their 24 games since the German tactician took charge. Furthermore, Chelsea are starting to show better pedigree in attack with every passing game, as has been seen in the recent wins over Fulham and Real Madrid.

Manchester City and Chelsea have already locked horns twice this season, with the Citizens getting the better of the Blues in the reverse fixture before Thomas Tuchel’s charges handed them a 1-0 loss in the FA Cup semi-final last month. Ahead of the latest meeting between the two sides, The Hard Tackle takes a closer look at the encounter.

Pep Guardiola has been handed a boost on the team news front ahead of the visit of Chelsea, with John Stones back at his disposal after serving his three-match ban. However, Eric Garcia could be unavailable once again due to illness.

Stones, though, could be given a breather after featuring against PSG earlier this week. Ruben Dias is also due a rest, but could be handed a start considering the stature of the game, with Aymeric Laporte starting alongside him at the heart of the Manchester City defence. Out wide, Joao Cancelo and the improving Benjamin Mendy should be the two full-backs.

Former Chelsea midfielder Kevin De Bruyne will be the creator-in-chief for Manchester City, with Rodri likely to come in for Fernandinho at the base of the midfield. City’s top scorer this season, Ilkay Gundogan will likely be the third man in the three-man unit, looking to make late runs into the Chelsea box to look for scoring opportunities, with his movement also creating pockets of space.

The key decisions in attack will centre around the personnel selection. Sergio Aguero, who has been linked with a shock move to Chelsea, could be in line to start each of the remaining four games and will spearhead the Manchester City attack on Saturday. The Argentine will likely be flanked by Raheem Sterling and Phil Foden, with Riyad Mahrez and Ferran Torres being options on the bench. 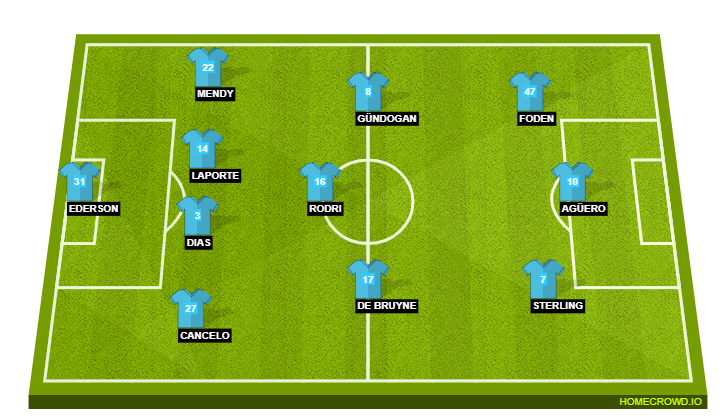 Like his counterpart in the Manchester City dugout, Thomas Tuchel does not have any fresh injury concerns hampering his preparations ahead of the trip to the Etihad. On Saturday, the Chelsea boss will be without just one first-team player, with Mateo Kovacic still struggling with a hamstring issue.

Kovacic’s continued absence means Jorginho and N’Golo Kante, who was sublime earlier this week against Real Madrid, will continue to pair up in the midfield double pivot. Kante seems to have rediscovered an exuberantly attacking side to his game and will hope to provide the forward thrust from midfield while also looking to keep a lid on Ilkay Gundogan and Kevin De Bruyne.

The rest of the Chelsea starting lineup, though, could see a few changes, with Tuchel hinting during his pre-match press conference that there could be an injection of freshness. The changes should largely come in attack, with Christian Pulisic getting a chance to impress.

However, considering that Chelsea are still very much in the top four race, Tuchel might not want to spoil the balance of his side, meaning the Blues’ creative force Mason Mount will keep his place, while Kai Havertz will lead the line against Manchester City, hoping to score his first goal outside London in Chelsea colours.

Reece James ought to earn a recall as the right wing-back and his output will determine just how much creative workload Mount gets to share. The same goes for Ben Chilwell on the left flank. As for defence, Thiago Silva is due a rest, with Cesar Azpilicueta likely to drop down to the backline, starting alongside Andreas Christensen and Antonio Rudiger in the three-man unit. 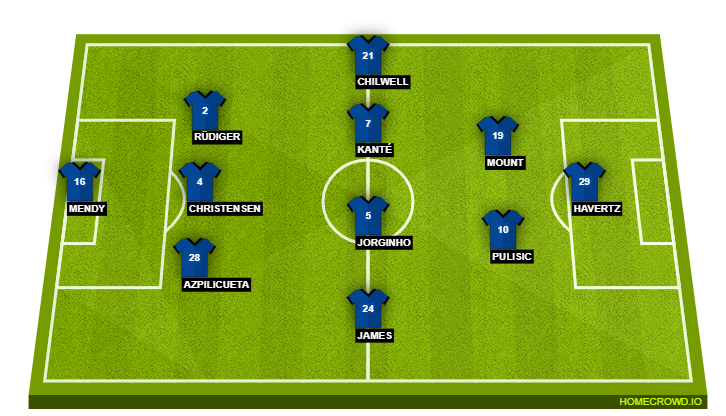 A game of such magnitude invariably has many players who can change the proceedings on their own. Names like Kevin De Bruyne, Mason Mount and Phil Foden come to mind, but we are going with Raheem Sterling for this section, amid growing uncertainty surrounding his future with Manchester City.

For some years now, Sterling has been one of the extraordinary players at Pep Guardiola’s disposal. However, a sub-par campaign has piled on the pressure on him, seeing as Foden and Riyad Mahrez have been exceptional since the turn of the year. With chances running out for him, the game versus Chelsea is the best occasion to make a statement. Will the Englishman deliver the goods?

This is one of those matches that have the potential of becoming a game of chess as the minutes wear on. Neither Manchester City nor Chelsea will want to give an inch in a bid to get one up on the other ahead of the UEFA Champions League final. With Chelsea also chasing a top four spot, there could be a few chances on either end of the pitch.

However, this is a game between two sides that boast the most solid defensive units in the Premier League at the moment. However, with Manchester City slipping up a little at the Etihad lately, Chelsea will fancy their chances. In the end, though, there might not be much to separate the two sides, which is why The Hard Tackle predicts a 1-1 draw between the Champions League finalists.