AC Milan will be desperate to get back to winning ways and return to the top four when they welcome Benevento to San Siro on Saturday.

Just six more matchdays remain for the 2020/21 Serie A season to come to an end, and the top four race is more intense than ever before. The latest chapter in the said race will unfurl on Saturday when the free-falling AC Milan play hosts to Benevento at San Siro on Saturday.

AC Milan have been nothing short of disastrous since the turn of the year. Once perched atop the table and looking certain to return to the UEFA Champions League, the Rossoneri have been one of the most underwhelming teams in 2021. And, defeats in back-to-back games have meant that Stefano Pioli’s men have dropped down to fifth on the table, with their top four hopes dangling by a thread.

Benevento, on the other hand, have blown hot and cold upon their return to Serie A, losing just under half of the 33 games they have played so far this term, winning just seven. Gli Stregoni have, in fact, managed to win just once in 2021, with that sole victory coming way back in January, over fellow relegation contenders Cagliari. As things stand, Filippo Inzaghi & co. are 18th, level on points with 16th-placed Torino and 17th-placed Cagliari.

The reverse fixture, played at Stadio Ciro Vigorito back in January, saw ten-man AC Milan run out 2-0 victors over Benevento. Ahead of the latest meeting between the two sides, The Hard Tackle takes a closer look at the encounter.

Stefano Pioli does not have any roster issues whatsoever hampering his preparations ahead of the visit of Benevento. Indeed, on Saturday, the AC Milan manager will have a full-strength squad at his disposal, with Zlatan Ibrahimovic recovering from a minor injury.

The veteran Swedish striker ought to return to the starting lineup straightaway, coming in for Mario Mandzukic, who failed to impress last time out against Lazio. While Ibrahimovic will lead the line for AC Milan against Benevento, Ante Rebic and Alexis Saelemaekers will likely be the two wide men.

The onus in the final third, though, will be on Hakan Calhanoglu, who will look to pull the strings higher up the pitch and engineer the openings. As for the midfield double pivot, Ismael Bennacer ought to keep hold of his spot despite a sub-par display last time out, with Franck Kessie a certainty in the middle of the park.

The only other major change should see captain Alessio Romagnoli return to the heart of the AC Milan defence following a disastrous showing by Fikayo Tomori against Lazio. Simon Kjaer will be his central defensive partner, with Davide Calabria and Theo Hernandez being the two full-backs while Gianluigi Donnarumma will take his place in goal. 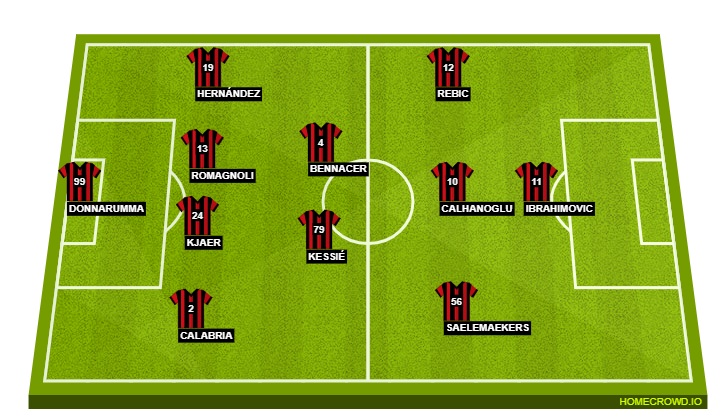 Unlike his counterpart in the AC Milan dugout, Filippo Inzaghi has a fair few issues to contend with ahead of the trip to San Siro. On Saturday, the Benevento manager will have to make do without three first-team players, with Alessandro Tuia (calf), Marco Sau (hamstring) and Gabriele Moncini (ankle) missing out on the travelling squad for the visitors.

Inzaghi should set Benevento up in his usual 3-5-2 formation, which will see the defensive line take the shape of a back five when AC Milan attack. Luca Caldirola, Kamil Glik and Federico Barba are likely to retain their spots in the three-man central defensive unit, with Lorenzo Montipo taking his place between the sticks.

The two wing-backs – expected to be Fabio Depaoli and Riccardo Improta – will be tasked with providing the width higher up the pitch, with their deliveries holding the key for Benevento against a nervy AC Milan defence. The three midfielders will primarily be tasked with keeping a lid on Hakan Calhanoglu’s output.

Captain Nicolas Viola will sit at the base of the three-man midfield unit, receiving defensive support from Perparim Hetemaj and Artur Ionita. Finally, Gianluca Lapadula and Adolfo Gaich will form the strike partnership for Benevento against AC Milan. 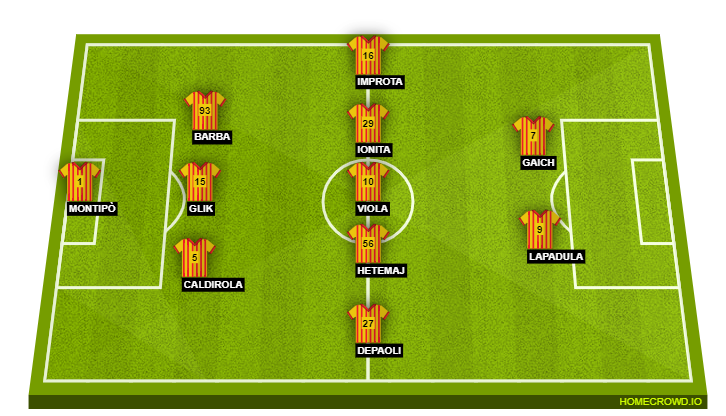 It goes without saying that with AC Milan struggling to impose themselves as much as they can at their very best, the man under the spotlight on Saturday against Benevento will be none other than Zlatan Ibrahimovic. The Swede, who has recently penned a new deal with the Rossoneri, has to step up after going off the boil in the last few months, partly due to a spate of injuries.

As the final juncture of the season begins, it will be imperative that Ibrahimovic not only remains healthy but also gets back among the goals. If he does, Ibrahimovic would become the first player to score against 80 different teams in the top five European leagues since 2000. A key outing beckons AC Milan’s star striker.

This is a must-win game for AC Milan, if there was any this season. With Benevento being a mess since the turn of the year, a golden opportunity is upon the hosts, who will be desperate to arrest their slump. Gli Stregoni’s usual nerviness early into the game ought to come to Milan’s aid and an early goal could set the tone for a crucial win. The Hard Tackle predicts a 2-0 win for Stefan Pioli & co.