AC Milan will be hoping to keep their faint Serie A title hopes alive when they welcome Sassuolo to San Siro on Wednesday.

The footballing world might be dominated by talks of the controversial European Super League, but that is not stopping games from coming thick and fast. In Serie A, nearly all the bigwigs will be in action on Wednesday, with AC Milan playing hosts to Sassuolo at San Siro.

2021 has not been a good year for AC Milan, who have managed to win just three of their nine Serie A games since the turn of the year. Having entered the new year perched atop the table, their poor form has meant that the Rossoneri have been consistently falling behind local rivals Inter Milan in the title race, with the Nerazzurri currently nine points ahead.

Sassuolo, on the other hand, have been one of the most eye-catching teams in Serie A this season, even if results have not always corroborated that. The Neroverdi have won just 12 of their 31 league games this season, having blown hot and cold after a strong start to the campaign, and will have to suffice with a place in the top half of the standings as a result.

The reverse fixture, played at Stadio Citta del Tricolore back in December, saw AC Milan eke out a narrow 2-1 win over Sassuolo. Ahead of the latest meeting between the two sides, The Hard Tackle takes a closer look at the encounter.

Zlatan Ibrahimovic is available to take on Sassuolo. (Photo by Marco Luzzani/Getty Images)

Stefano Pioli has been handed a major boost on the team news front ahead of the visit of Sassuolo. On Wednesday, the AC Milan manager will be bereft of the services of just one first-team player, with Davide Calabria still recovering from a knee injury.

Calabria’s continued absence means Diogo Dalot ought to be given a chance to impress after a bright cameo against Genoa last weekend. The rest of the back four is unlikely to remain unchanged either, with Alessio Romagnoli expected to return to the heart of the AC Milan defence in place of Fikayo Tomori, while Simon Kjaer and Theo Hernandez will retain their spots.

Up ahead in midfield, there is no looking past the formidable duo of Franck Kessie and Ismael Bennacer in the double pivot, with the two being key in handing AC Milan the control over Sassuolo while Hakan Calhanoglu picks himself in the advanced position to reprise the no. 10 role.

Finally, the attack will see one key change following the return of Zlatan Ibrahimovic from a one-match ban. With Ibrahimovic having served his suspension, he should lead the line for AC Milan against Sassuolo, with Ante Rebic and Alex Saelemaekers being the two wide men. 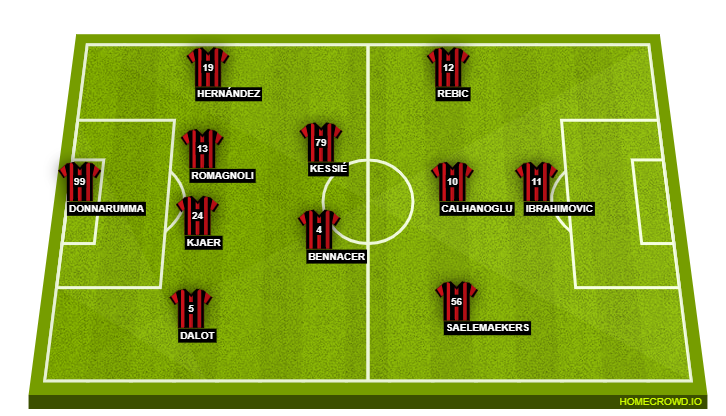 Like his counterpart in the AC Milan dugout, Roberto De Zerbi does not have any fresh injury concerns hampering his preparations ahead of the trip to San Siro. On Wednesday, the Sassuolo manager will continue to have to make do without as many as two first-team players.

Andrea Consigli will take his place between the sticks for Sassuolo, who will line up in a 4-2-3-1 formation in front of him. The key players in defence will be centre-backs Vlad Chiriches and Gian Marco Ferrari, both of whom will need to keep a check on Zlatan Ibrahimovic. Mert Muldur and Georgios Kyriakopoulos will be the full-backs for the visitors.

Up ahead in midfield, Maxime Lopez and Manuel Locatelli will form an enterprising double pivot, with the duo looking to keep a lid on Hakan Calhanoglu’s output. Speaking of Calhanoglu, his opposite number ought to be Filip Djuricic, with Domenico Berardi and Jeremie Boga being the two wide men. Finally, Giacomo Raspodori will spearhead the Sassuolo attack versus AC Milan. 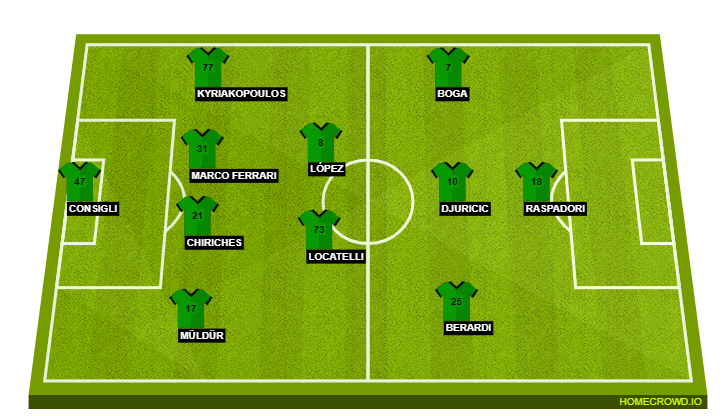 It has been a season of two halves for Zlatan Ibrahimovic so far, and indeed for AC Milan, whose drop in form and fortunes has resembled the veteran Swede’s own form. Ibrahimovic could do no wrong in Serie A once, but the goals have been drying up at an alarming rate for him.

Now back at Stefano Pioli’s disposal and raring to go, it is Ibrahimovic who desperately need to step up if he is to inspire AC Milan to a strong finish to the season. A vulnerable Sassuolo defence presents a fine opportunity for him to be back among the goals. Failure to do so, though, could pave the way for another sub-par outing for AC Milan.

This is a potential banana skin encounter for AC Milan. Sassuolo are not a team to be taken lightly and the Neroverdi are sure to take the game to their hosts. However, with Franck Kessie and Ismael Bennacer starting to become a formidable midfield partnership, the visitors might be kept at bay for the most part. On the opposite end, Zlatan Ibrahimovic ought to deliver, which is why we predict a 2-1 win for Stefano Pioli & co.