Manchester United will hope to keep their slim Premier League title hopes alive when they welcome Burnley to Old Trafford on Sunday.

The action across Europe is coming at breakneck speed and in England, Gameweek 32 of the 2020/21 Premier League season is underway. Just two matches are on show on Sunday, with the second of those fixtures being played at Old Trafford, where Manchester United will play hosts to Burnley.

Manchester United have continued to make definitive progress under the tutelage of Ole Gunnar Solskjaer, who is set to oversee a runner-up finish in the Premier League at the very least. However, with Manchester City slipping up against Leeds United last weekend, a glimmer of hope has presented itself to the Red Devils, who come into this game on the back of a 2-0 win over Granada.

Burnley, on the other hand, have endured a difficult 2020/21 campaign, which has seen them flirt with relegation right from their opening game of the season. Heading into this weekend, the Clarets were 16th on the Premier League table, but have fallen down to 17th following Newcastle United’s crucial win over West Ham United on Saturday. Sean Dyche & co. are likely to remain safe, with 18th-placed Fulham seven points behind.

The reverse fixture, played at Turf Moor back in January, saw Manchester United eke out a narrow 1-0 win over Burnley, courtesy Paul Pogba’s 71st minute strike. Ahead of the latest meeting between the two sides, The Hard Tackle takes a closer look at the encounter.

Ole Gunnar Solskjaer is sweating over the fitness of Marcus Rashford. (Photo by Stu Forster/Getty Images)

Ole Gunnar Solskjaer does not have any fresh injury concerns hampering his preparations ahead of the visit of Burnley. On Sunday, the Manchester United manager will be bereft of the services of just three first-team players.

The good news comes in the form of the availability of Harry Maguire, Luke Shaw and Scott McTominay, each of whom should be reintated in the starting lineup against Burnley. Those who miss out for Manchester United are Phil Jones and Anthony Martial, while Eric Bailly is unlikely to be involved, having only recently recovered from COVID-19.

Solskjaer is also sweating over the fitness of Marcus Rashford, who has been struggling with a plethora of issues over the course of the season. The English international, though, should be fit enough to make the starting lineup, in what will likely be a strong attacking unit, seeing as the Red Devils play their next game after seven days.

Rashford will join Bruno Fernandes, Mason Greenwood and Edinson Cavani in the attacking unit, with Cavani, in particular, looking to bring his teammates into the game with his hold-up play. In midfield Paul Pogba ought to partner McTominay in the double pivot.

As for the defence, Harry Maguire will pair up with Victor Lindelof at the heart of the Manchester United backline, with Shaw and Aaron Wan-Bissaka being the two full-backs. Finally, in goal, Dean Henderson should come into the side to replace David de Gea. 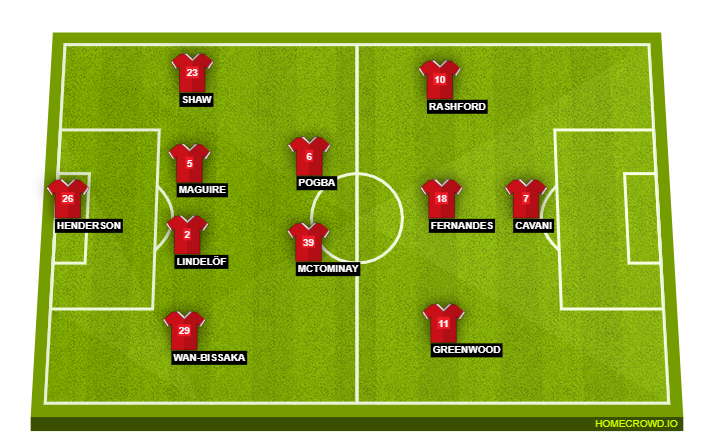 Like his counterpart in the Manchester United dugout, Sean Dyche has greeted quite a few positive updates on the team news front ahead of the trip to Old Trafford. On Sunday, the Burnley manager is only likely to have to make do without three first-team players.

The likes of Robbie Brady, Kevin Long and Ashley Barnes are all long-term absentees and will take no part in the game on Sunday. Dyche, meanwhile, is sweating over the fitness of Nick Pope and Dwight McNeil, with both the players set to face late fitness tests to determine their availability.

Pope, though, should be back from a shoulder injury to take his place between the sticks, with Burnley lining up in their trademark 4-4-2 formation in front of him. The back four should feature Erik Pieters, Matthew Lowton, James Tarkowski and Ben Mee, with the quartet looking to remain compact during the defensive phase to rob Manchester United of space to work around with.

Midfield will form the second line of press, formed by a second bank of four, with McNeil likely to be back. McNeil will take his place on the left flank, with Johann Berg Gudmundsson starting on the right-hand side. In the middle, Ashley Westwood and Josh Brownhill will form the double pivot, with Matej Vydra and Chris Wood forming the strike partnership. 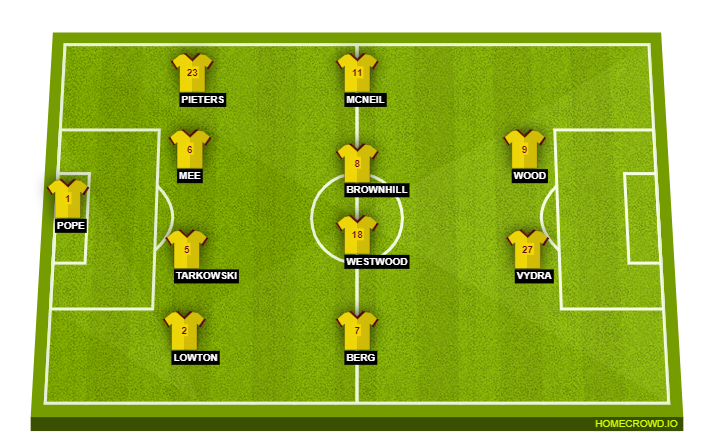 While usually there would be several contenders for this section, this weekend there is no looking past Paul Pogba. Coming off the back of giving an much talked about interview, wherein he made some explosive comments, the Frenchman now has to put his head down once again and let his game do the talking for him.

Pogba, this season, has become a vital cog once again for Manchester United, not just pulling the strings almost effortlessly at times but also chipping in with some very important goals. He will need to rise to the occasion once again this weekend, especially with Bruno Fernandes starting to look jaded due to the sheer volume of games he has played. A key game for Pogba.

This should be a fairly comfortable outing for Manchester United. Yes, Burnley have quite enjoyed at Old Trafford in recent years, but have not been able to contain the threat of the opposition as well as they usually do. With the Red Devils also starting to look livelier in the final third, goals are unlikely to come few and far between. With all that being said, The Hard Tackle predicts a 2-0 win for Manchester United.