Chelsea will be eager to bounce back to winning ways in the Premier League when they take on Crystal Palace at Selhurst Park on Saturday.

We are into the run-in period of the season, with tables starting to take their final shapes across leagues, with the end of the campaign in sight. In the Premier League, the final game on Saturday in Gameweek 31 will see Crystal Palace play hosts to Chelsea at Selhurst Park.

Crystal Palace have once again been quite comfortable in the Premier League this season under the tutelage of Roy Hodgson, who has ensured another top-flight campaign for the Eagles. The hosts are currently 12th on the table with 38 points to their name. And, with 10th-placed Arsenal just four points clear of them, a top half finish might not be out of question.

Chelsea, on the other hand, have endured a roller-coaster of a 2020/21 campaign, having first blown hot and cold under Frank Lampard before beginning their recovery under Thomas Tuchel. The Blues have lost just once with the German manager in-charge, although that was their most recent game, against West Brom in a result that has left them fifth and behind West Ham United.

The reverse fixture, played at Stamford Bridge back in October, saw Chelsea produce a stunning second half display to cruise to a 4-0 win over Crystal Palace. Ahead of the latest meeting between the two sides, The Hard Tackle takes a closer look at the encounter.

Mamadou Sakho is one of six Crystal Palace players who will miss out against Chelsea. (Photo by Franck Fife/AFP/Getty Images)

Roy Hodgson has a number of roster issues hampering his preparations ahead of the visit of Chelsea. On Saturday, the Crystal Palace manager will be bereft of the services of as many as six first-team players due to injuries or other issues.

The likes of James Tomkins, Mamadou Sakho, Nathan Ferguson, Nathaniel Clyne and James McArthur all remain on the sidelines, with James McCarthy the only player who is set to return. Meanwhile, Michy Batshuayi is unavailable, as he is ineligible to take on parent club Chelsea as part of the terms of his loan deal.

None of the absentees, apart from maybe McArthur, are posing any sort of a major headache for Hodgson, who will set Crystal Palace up in a 4-4-2 formation, with Vicente Guaita set to take his place in goal for the hosts. In front of him, Cheikhou Kouyate and ex-Chelsea defender Gary Cahill will form the central defensive partnership, while Joel Ward and Patrick van Aanholt will be the two full-backs.

Up ahead in midfield, captain Luka Milivojevic will have a key role to play, as he will need to keep things tight in the middle of the park along with Jairo Riedewald. Out wide, Eberechi Eze and Jordan Ayew will be the two players looking to take up central positions and support the two strikers – Christian Benteke and Wilfried Zaha. 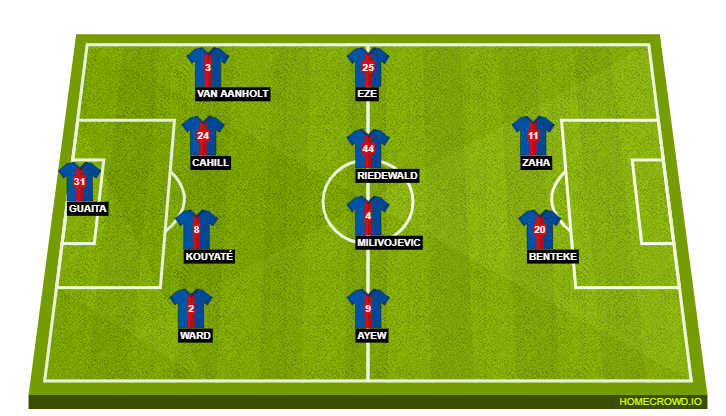 Like his counterpart in the Crystal Palace dugout, Thomas Tuchel has one fresh roster issue to deal with ahead of the trip to Selhurst Park. On Saturday, the Chelsea boss will have to make do without just one first-team player, with Thiago Silva suspended after being sent off last time out against West Bromwich Albion.

In Silva’s absence, Andreas Christensen ought to slot in at the centre of the back three, with Cesar Azpilicueta and Antonio Rudiger starting alongside him in the three-man unit. Edouard Mendy will be stationed in goal, with the Chelsea goalkeeper hoping to continue stepping up, just as he did against FC Porto in the UEFA Champions League earlier this week.

A few changes are in order in midfield as well, with N’Golo Kante set to return to the starting lineup, with Mateo Kovacic being his partner in the middle of the park. Out wide, Marcos Alonso and Callum Hudson-Odoi should be installed as the two wing-backs.

Mason Mount is the single-most important figure in the Chelsea first-team squad and the English international is a certainty in the attacking setup. Mount will likely have Christian Pulisic and Olivier Giroud for company in the final third, with the likes of Hakim Ziyech, Timo Werner and Kai Havertz being options off the bench. 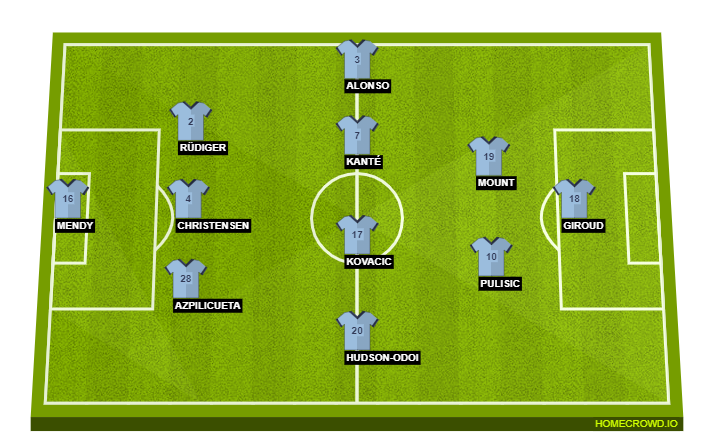 Who else but Mason Mount? The English international had come into this season on the back of a breakthrough campaign with Chelsea. However, the way he has stepped up in the ongoing season has been nothing short of remarkable, with Mount establishing himself as a pivotal figure for the Blues.

In defeat last week, Mount was Chelsea’s best player and when they did return to winning ways, the 22-year-old once again stood out. So, as Chelsea look to reclaim a spot in the top four ahead of the end of the season, it is Mount who will need to be at his very best while being supported, starting with the game against Crystal Palace.

This is not going to be a straightforward outing for Thomas Tuchel and his charges. Crystal Palace seem to have improved on the defensive front lately and will have taken heart from West Bromwich Albion’s performance last week. However, with Mason Mount on fire right now, Chelsea have the cutting edge to nick this one by the odd goal, and The Hard Tackle predicts a 1-0 win for the Blues.