Manchester United will be hoping to keep their faint Premier League title hopes alive when they welcome Brighton & Hove Albion to Old Trafford on Sunday.

Gameweek 30 of the 2020/21 season continues into Sunday, with as many as four matches on show. The proceedings for the day will end at Old Trafford, where Manchester United will play hosts to Brighton & Hove Albion, hoping to keep pace with neighbours Manchester City.

Manchester United have continued their upwards trajectory under the tutelage of Ole Gunnar Solskjaer, even if silverware continues to elude them. The Red Devils have particularly stepped up in the Premier League, where they are set for a top-two finish and were even perched atop the table at one point. Heading into the game, United are 17 points adrift of leaders Manchester City, needing a miracle to win the title.

Brighton & Hove Albion, on the other hand, have been battling for safety from the early stages of the season and largely due to their own shortcomings. While the Seagulls tend to create chances aplenty, their finishing has often been lacklustre. Defensively, Graham Potter’s men have been quite solid, but their position in the standings is perilous, with 18th-placed Fulham just six points adrift.

The reverse fixture, played back in September at the Amex Stadium, was a controversial game as Manchester United came from behind to beat Brighton 3-2 after the full-time whistle had initially been blown at 2-2 before Bruno Fernandes scored a late penalty. Ahead of the latest meeting between the two sides, The Hard Tackle takes a closer look at the encounter.

Anthony Martial could miss out for Manchester United against Brighton & Hove Albion. (Photo by Oli Scarff/AFP via Getty Images)

Ole Gunnar Solskjaer has a number of pressing injury concerns hampering his preparations ahead of the visit of Brighton & Hove Albion. On Sunday, the Manchester United manager could be bereft of the services of as many as four first-team players.

Phil Jones is certain to miss out due to the knee injury that has bothered him all season long. In addition, Solskjaer is sweating over the fitness of Victor Lindelof (back) and Anthony Martial (knee), with Juan Mata a major doubt as well.

However, in some good news, Mason Greenwood and Marcus Rashford are available after rejoining training ahead of the game. The duo should be in contention to start, with Rashford likely to be deployed on the left flank, although Greenwood might only be an option off the bench. In his stead, Daniel James should get another opportunity to impress.

With Greenwood likely to be benched, Edinson Cavani will likely lead the line for Manchester United against Brighton, with Bruno Fernandes reprising his usual no. 10 role. Paul Pogba should start as well, sitting in the double pivot alongside Fred, meaning Manchester United will have plenty of creativity flowing through the middle.

At the back, the uncertainty over Lindelof’s availability means Eric Bailly will likely pair up with captain Harry Maguire at the heart of the Manchester United defence, with Luke Shaw and Aaron Wan-Bissaka being the two full-backs. The key decision will come in goal, where Dean Henderson could well get the nod over David de Gea. 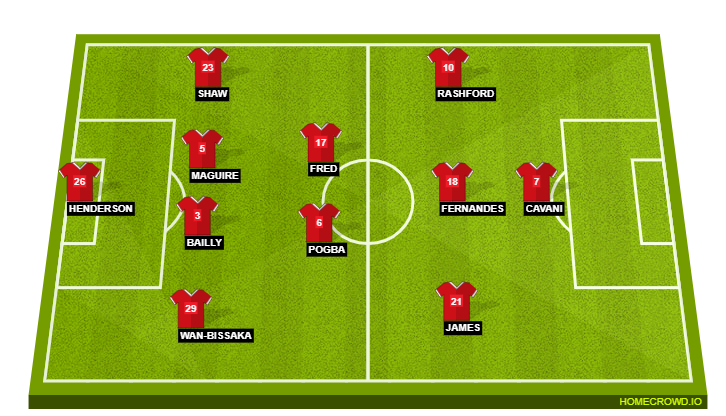 Like his counterpart in the Manchester United dugout, Graham Potter has a plethora of key players struggling with fitness issues ahead of the trip to Old Trafford. On Sunday, the Brighton & Hove Albion manager will have to make do without six first-team squad members.

The only player who is likely to be available for selection is Aaron Connolly, who has resumed full training this week. However, the game has come too soon for the likes of Dan Burn, Adam Webster and Percy Tau, while Tariq Lamptey, Solly March and Florin Andone continue to be on the sidelines.

Burn’s absence means captain Lewis Dunk, Joel Veltman and Ben White, who has been linked with Manchester United lately, picking themselves as the three central defenders in front of Robert Sanchez, who will be stationed in the Brighton goal.

Meanwhile, with Lamptey and March unavailable, Pascal Gross and Jakub Moder will start as the makeshift wing-backs, with Yves Bissouma and Adam Lallana starting in the midfield double pivot. Finally, a fluid attacking trio will see Leandro Trossard play off of the two strikers in Neal Maupay and former Manchester United forward Danny Welbeck. 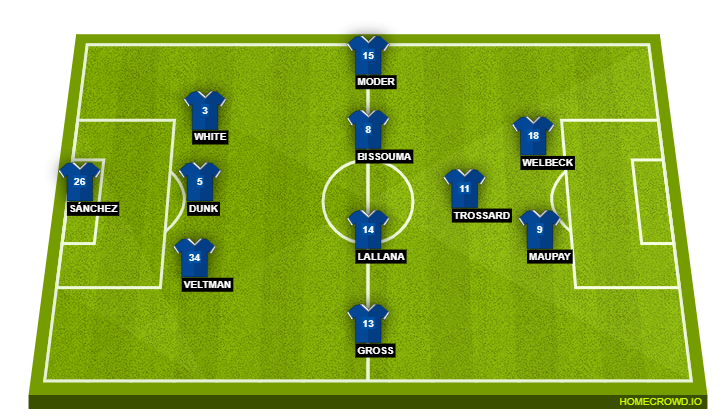 After a brilliant first half of the season, things have gone slightly pear-shaped for Bruno Fernandes. While he still remains the single-most influential member of Ole Gunnar Solskjaer’s squad, the Portuguese international has been blowing hot and cold a great deal in the last couple of months.

Suffice to say, that has reflected in Manchester United’s results, with the Red Devils slowly drifting away from Premier League leaders Manchester City. If the Red Devils are to keep their faint title hopes alive, it is Bruno Fernandes who will need to be on the money. If not, the title will become a mere formality for United’s neighbours.

This should be quite a tricky one for Manchester United. With Manchester City running away with the Premier League title, the Red Devils simply cannot slip up, although Brighton can give them a run for their money.

Having said that, United have been becoming increasingly solid at the back and should keep another clean sheet. On the opposite end, Bruno Fernandes should be in his elements along with Paul Pogba, which should be enough to hand the hosts all three points. With that in mind, The Hard Tackle predicts a 2-0 win for Ole Gunnar Solskjaer & co.