AC Milan will be hoping to keep their faint Serie A title hopes alive when they welcome Sampdoria to San Siro on Saturday.

The international break is behind us and that means club football can finally begin its run-in period for the 2020/21 season. In Serie A, Matchday 29 begins this weekend, with AC Milan starting things off when they play hosts to Sampdoria at San Siro in the lunch-time kick-off.

AC Milan were the team to beat for much of the Serie A campaign, having remained atop the table in the first half of the season before beginning their downslide post the turn of the year. Their home form, in particular, has been concerning, with the Rossoneri winning just one of their last six at San Siro in all competitions. This has meant that Stefano Pioli’s men have ceded the lead to neighbours Inter Milan.

Sampdoria, on the other hand, have blown hot and cold, managing to win just three of their last 10 games but also losing only four of the remaining seven (D3). Their away form over the course of the season has not been too inspiring either, with the Blucerchiati failing to win a staggering 10 of their 14 Serie A outings on the road.

The reverse fixture, played at the Luigi Ferraris Stadium back in December, ended in a 2-1 win for AC Milan, with Franck Kessie and Samu Castillejo on target for the Rossoneri before Albin Ekdal scored a late goal for Sampdoria. Ahead of the latest meeting between the two sides, The Hard Tackle takes a closer look at the encounter.

Stefano Pioli has been handed a major boost on the team news front ahead of the visit of Sampdoria but is still missing a number of players. On Saturday, the AC Milan manager will be bereft of the services of as many as five first-team players.

The good news comes in the form of Ante Rebic’s return, with the Croat recovering from a hip injury while also having his two-match ban reduced. Those who remain on the sidelines are captain Alessio Romagnoli (calf), Davide Calabria (knee), Brahim Diaz (ankle), Rafael Leao (hamstring) and Mario Mandzukic (muscle injury).

However, the return of Rebic is well-timed, with the Croat set to return to the attacking unit. Zlatan Ibrahimovic will lead the line for AC Milan, with Alexis Saelemaekers taking his spot on the right flank, with Hakan Calhanoglu playing off of Ibrahimovic and looking to find his teammates in pockets of spaces.

In midfield, Pioli has his strongest pair back at his disposal, with Franck Kessie and Ismael Bennacer set to line up in a dynamic double pivot. As for defence, Romagnoli’s absence means Simon Kjaer and Fikayo Tomori pairing up at the heart of AC Milan’s backline while Diogo Dalot and Theo Hernandez will be the two full-backs. In goal, Gianluigi Donnarumma picks himself. 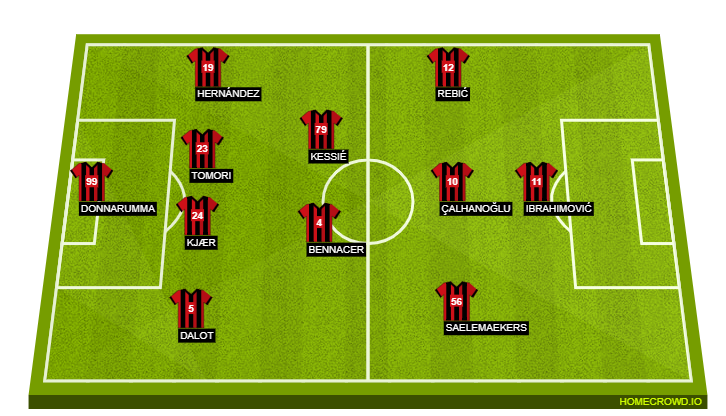 Unlike his counterpart in the AC Milan dugout, Claudio Ranieri has one fresh injury concern hampering his preparations ahead of the trip to San Siro. Against AC Milan on Saturday, the Sampdoria boss will have to make do without three first-team players.

The major absentee is Albin Ekdal, who sustained a muscle injury while on international duty with Sweden. In addition, the likes of Lorenzo Tonelli (head) and Ernesto Torregrossa (muscle injury) are also unavailable for Sampdoria.

Emil Audero will take his place between the sticks, with Sampdoria expected to be set up in a 4-4-2 formation against AC Milan. Maya Yoshida and Omar Colley are certainties in the central defensive partnership, with Bartosz Bereszynski and Tomasso Augello being the two full-backs for the visitors.

Up ahead in midfield, the onus will be on Adrien Silva and Morten Thorsby to keep things tight and keep a lid on Hakan Calhanoglu’s output. Out wide, Antonio Candreva and Jakub Jankto should be the men in charge of providing the width, with Keita Balde Diao and Fabio Quagliarella forming the strike partnership for Sampdoria. 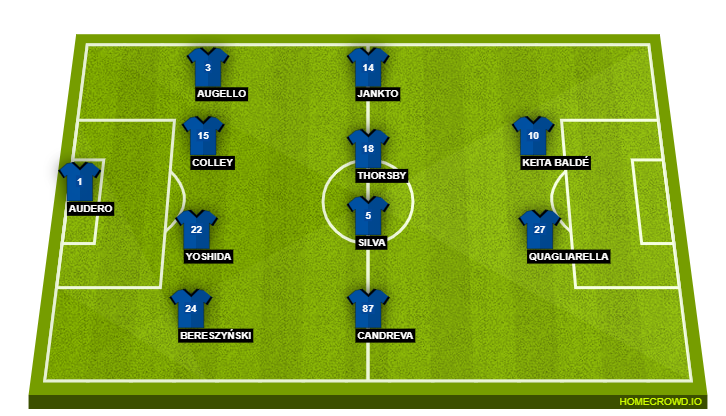 He is a player who has slowly gone on to establish himself as the AC Milan talisman. And, it is no wonder that AC Milan’s inconsistent run coincided with the time he was in and out of the side due to a couple of injuries.

Now back at full fitness and after playing a key role in Turkey’s solid start to the FIFA World Cup 2022 Qualifiers campaign, Calhanoglu will hope to end the season on a high with AC Milan. If he can manage to remain at his best then the Rossoneri will likely finish in the top two at the very least. It all starts with the contest against Sampdoria, in what is a key home game for the Rossoneri.

AC Milan have not been at their best at home this season and a tricky Sampdoria side presents another big test for the Rossoneri. However, the timely return of Ante Rebic coupled with the fitness situation of Hakan Calhanoglu and Zlatan Ibrahimovic means the hosts should claim all three points, if only just. With that in mind, The Hard Tackle predicts a 2-1 win for Stefano Pioli’s men.