A place in the FA Cup semi-finals will be on the line when Leicester City face Manchester United at the King Power Stadium in the quarter-final on Sunday.

The last of the four FA Cup semi-finalists will be identified on Sunday, with the final quarter-final tie set to be played at the King Power Stadium. Leicester City will be playing hosts to Manchester United in the game, in what will be the marquee fixture of this stage of the competition.

Leicester City entered the FA Cup in the third round, where they eased past Stoke City with a 4-0 win before beating Brentford and Brighton & Hove Albion in the subsequent stages. Manchester United, on the other hand, have eked out a one-goal win in each of their three games in this year’s tournament, beating Watford, Liverpool and West Ham United so far.

The Foxes have blown hot and cold in recent weeks, having managed to win just two of their last five games in all competitions, although those victories have come in each of their last two matches. Manchester United, on the other hand, have not been beaten in any of their last 14 outings, though only half of those games have ended in a win.

One of those wins came earlier this week, as they beat AC Milan to reach the UEFA Europa League quarter-finals. Leicester and Manchester United played out a 2-2 draw in their only previous meeting this season, and ahead of the latest fixture featuring the two sides, The Hard Tackle takes a closer look at the encounter.

James Maddison is one of the players missing out for Leicester City against Manchester United. (Photo by David Rogers/Getty Images)

Brendan Rodgers has a plethora of injury concerns hampering his preparations ahead of the visit of Manchester United. On Sunday, the Leicester City manager will be bereft of the services of as many as six first-team players.

Dennis Praet and Sidnei Tavares are available to take on Manchester United, but Wes Morgan, James Justin, Ricardo Pereira, James Maddison, Harvey Barnes and Cengiz Under all miss out due to their respective injuries. Rodgers is, therefore, down to his bare-bones in a couple of departments within his squad.

In goal, Kasper Schmeichel is a certainty, with Leicester set to line up in a 3-4-1-2 formation versus Manchester United. Defence will hold the key for the hosts on Sunday, with Wesley Fofana, Caglar Soyuncu and former Manchester United star Jonny Evans forming the three-man central defensive unit.

Timothy Castagne and Luke Thomas will likely be the two wing-backs, with Christian Fuchs missing out. The duo will hold the key for Leicester higher up the pitch, providing the width while also playing a major role with their deliveries. In the middle of the park, Wilfred Ndidi will look to keep things tight while Youri Tielemans will provide the forward thrust.

Finally, in attack, the onus will be on Kelechi Iheanacho to continue from where he left off last time out against Sheffield United, with Jamie Vardy also being an important figure higher up the pitch. The final spot in the side will go to Ayoze Perez, who will play off of the two strikers. 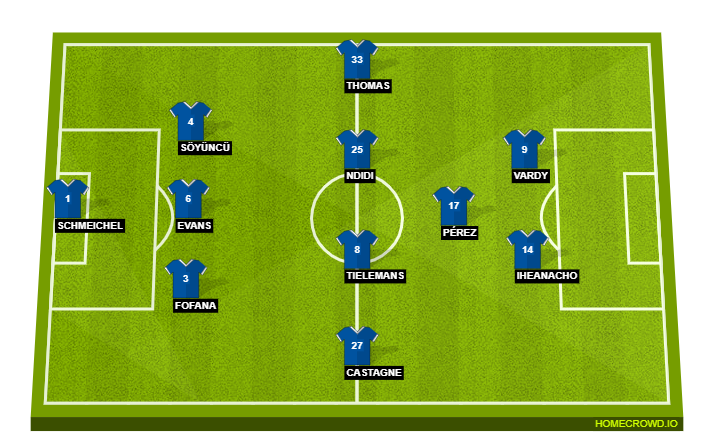 Like his counterpart in the Leicester City dugout, Ole Gunnar Solskjaer does not have any fresh fitness issues to contend with ahead of the trip to the King Power Stadium. However, on Sunday, the Manchester United manager could have to make do without as many as six first-team players.

Having said that, there are only two players who are certain to be unavailable, those being Phil Jones and Juan Mata. In addition, the likes of Eric Bailly, Marcus Rashford, Anthony Martial and Edinson Cavani will all be assessed ahead of the game, with none of them looking like potential starters against Leicester.

The situation surrounding Rashford, Martial and Cavani means Mason Greenwood is likely to lead the line for Manchester United against Leicester, with Daniel James starting on the right flank. On the left-wing, Paul Pogba could start for the first time since recovering from a hamstring injury while Bruno Fernandes picks himself in the no. 10 slot.

In midfield, Nemanja Matic is likely to be handed a start, sitting alongside Fred in the double pivot. As for the defence, it will be interesting to see if Solskjaer makes a shuffle in the left-back slot, or persists with Luke Shaw.

Shaw, though, could be given a breather, with Alex Telles getting a chance to impress. The Brazilian full-back will join Aaron Wan-Bissaka, Victor Lindelof and captain Harry Maguire in the backline, with Dean Henderson continuing in goal. 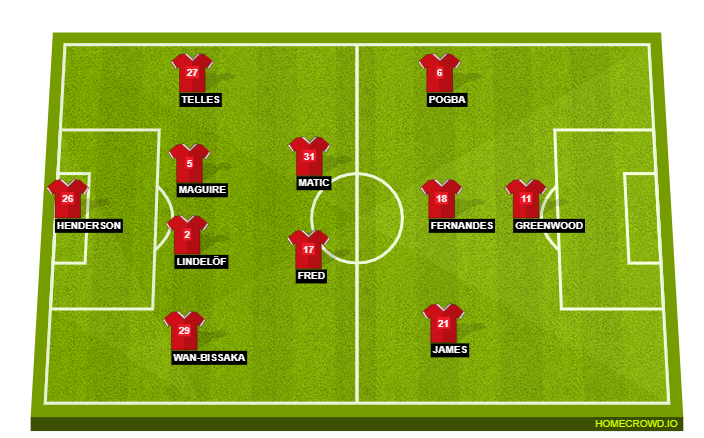 Paul Pogba is a viable candidate for this section after making an emphatic return from injury. Jamie Vardy is also an option, but Bruno Fernandes takes the cake due to his recent slide in form. The Portuguese playmaker has been Manchester United’s talisman this season, with his importance being immeasurable.

However, in recent weeks, he has started to look jaded, having had too much to do in the absence of Pogba. With the Frenchman now back, Bruno Fernandes could perhaps, start to play more freely and without that added burden on his shoulders. And, if Manchester United are to ease past Leicester City, it is Fernandes who will need to be at his best

A game that will be decided by the barest of margins. For the most part, there should be very little to separate Leicester City and Manchester United. However, with the likes of Marcus Rashford, Anthony Martial and Edinson Cavani possibly being options on the bench if not from the off, the visitors will have enough firepower to edge this tie, which is why The Hard Tackle predicts a 2-1 win for Ole Gunnar Solskjaer & co.