Tottenham will look to progress to the UEFA Europa League quarter-finals when they face Dinamo Zagreb at Stadion Maksimir on Thursday.

The curtains will fall on the Round of 16 of the UEFA Europa League this week, with the eight second leg fixtures set to be played on Thursday. Tottenham Hotspur will be in action in one of the earlier games, when they lock horns with Dinamo Zagreb at Stadion Maksimir.

Dinamo Zagreb reached the knockout stages of the UEFA Europa League after finishing atop Group K in the group stages. A 4-2 aggregate win over Krasnodar in the Last 32 set up a Round of 16 date with Tottenham and in recent games, they have been extremely solid, winning 9 of their last 10 outings.

However, heading into the game, the Croatian outfit have suffered a setback, with Damir Krznar replacing Zoran Mamic at the helm after Mamic was handed a four-year prison sentence for fraud. As for Tottenham, they started their European campaign this season during the qualifying stages of the Europa League before sealing top spot in Group J.

In the Round of 32, Spurs cruised past Wolfsberg 8-1 on aggregate before beating Dinamo Zagreb 2-0 in the first leg at the Tottenham Hotspur Stadium last week. Ahead of the second leg tie, The Hard Tackle takes a closer look at the encounter.

Zoran Mamic has resigned as the manager of Dinamo Zagreb after being sent to prison.

Mamic has been ordered to serve four years and eight months for fraud. pic.twitter.com/tq14NKeJye

Zoran Mamic’s forced resignation may have jolted Dinamo Zagreb ahead of the visit of Tottenham Hotspur on Thursday. However, newly-appointed boss Damir Krznar does not have much to worry about on the team news front, with Sadegh Moharrami the only player unavailable for the hosts.

Krznar has confirmed that he will continue pretty much with the same game-plan that Mamic was going to execute, meaning Dinamo Zagreb will be set up in a 4-5-1 formation that will aim to absorb much of the pressure that Tottenham will look to create before hitting them on the break.

Dominik Livakovic will be stationed in the Dinamo Zagreb goal, with Stefan Ristovski, Josko Gvardiol being the full-backs who will primarily remain pinned back before unleashing counters, while Kevin Theophile-Catherine and Rasmus Lauritsen will pair up at the heart of the defence.

Up ahead in midfield, captain Arijan Ademi will have the major responsibility of nipping the Tottenham attacks in the bud in the middle of the park. Ademi will receive defensive support from Kristijan Jakic and Luka Ivanusec, who will also provide the forward thrust from midfield.

Out wide, Lovro Majer and Mislav Orsic will bring the creative impetus higher up the pitch while also aiming to provide support to the full-backs in the defensive phase. Finally, Bruno Petkovic will lead the line for Dinamo Zagreb against Arsenal on Thursday. 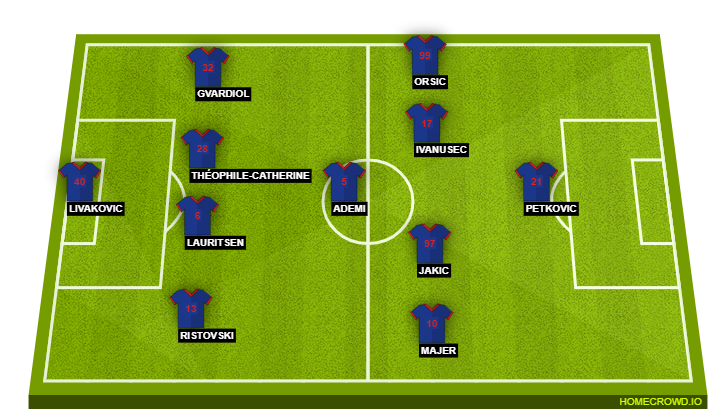 Unlike his counterpart in the Dinamo Zagreb dugout, Jose Mourinho has been handed a major blow on the team news front ahead of the trip to Stadion Maksimir. On Thursday, the Tottenham Hotspur boss will have to make do without two first-team players.

That solitary absentee due to injury is a major one, with Son Heung-min unavailable after picking up a hamstring injury last time out against Arsenal. In addition, Tottenham are also missing Pierre-Emile Hojbjerg due to a one-match ban after having picked up a third yellow card of this season’s tournament in the first leg.

However, there is some good news, with Giovani Lo Celso set to return to action in some capacity this week. Lo Celso, though, is unlikely to start, with Dele Alli starting through the centre, reprising the no. 10 role. Alli will be flanked by Steven Bergwijn and Erik Lamela, with Gareth Bale dropping to the bench following a stinker of a performance in the derby.

Harry Kane should be picked to spearhead the Tottenham attack versus Dinamo Zagreb.

In midfield, Hojbjerg’s absence forces Mourinho into one change, with Harry Winks set for a rare start. Moussa Sissoko ought to partner him in the double pivot. At the back, Ben Davies and Matt Doherty are likely to be the full-backs while Davinson Sanchez will form the central defensive partnership alongside Eric Dier, with Hugo Lloris taking his place between the sticks. 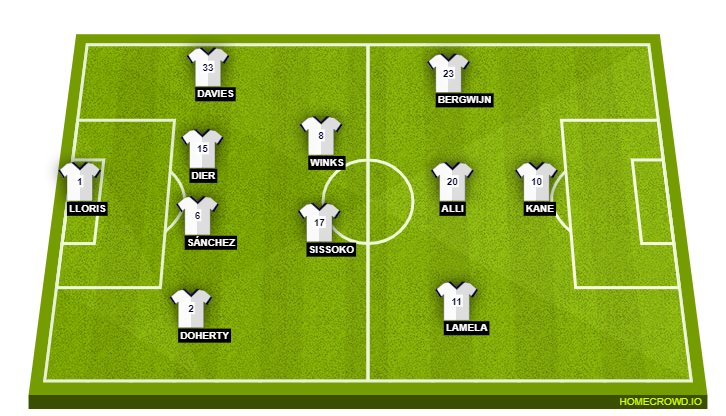 It has been yet another difficult season for Dele Alli, whose role at Tottenham has steadily reduced so far this term. In fact, it was even reported that the Englishman was set for a move away from the club in January before it failed to materialise. Since then, Alli has stepped up remarkably well and has been producing some positive performances.

With Son Heung-min missing and Gareth Bale likely to be benched, Alli will have a lot riding on him if Tottenham are to get past Dinamo Zagreb unscathed, especially with Harry Kane just recovering from a knock. And who knows, maybe another impressive display will turn Jose Mourinho’s head and earn him a more regular spot in the side.

Dinamo Zagreb have not been able to make the best of preparations due Zoran Mamic’s departure. And, that should prove to be a telling factor, enabling Tottenham Hotspur to claim a narrow win at a difficult venue. The Hard Tackle predicts Harry Kane to be on the score sheet again, earning the visitors a 1-0 win to go through to the UEFA Europa League quarter-finals 3-0 on aggregate.